1749 Vaugondy Map of Turkey and the Middle East 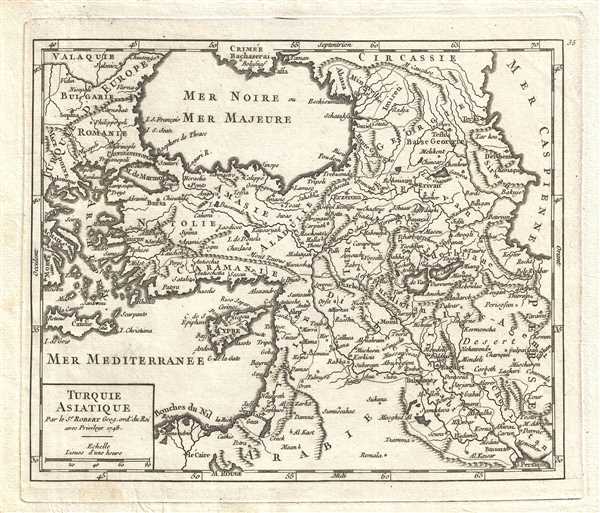 1749 Vaugondy Map of Turkey and the Middle East

Map of Turkey and the Middle East depicting Constantinople and Jerusalem.

This is a 1749 Gilles Robert de Vaugondy map of Asia Minor (Turkey) and the Middle East. The map depicts from European Turkey (Bulgaria and Romania) to the Caspian Sea and Iran (Persia/Perse) and from Crimea (Crimée) and the Black Sea to Egypt and Saudi Arabia (Arabie). The region is depicted in detail divided by region within the Ottoman Empire and with international borders between the Ottoman Empire and other nations, such as Persia and Arabia. Several important cities are labeled, including Constantinople, Beirut (Beyruth), Cairo (Le Caire), Baghdad (Bagdet), Aleppo (Alep), Nazareth, and Jerusalem. The Black Sea, Mediterranean Sea, and Caspian Sea are depicted, as well as countless rivers and tributaries. The Nile Delta, labeled as Bouches du Nil is depicted in Egypt, along with Alexandria. The Aegean Sea is labeled simply as an archipelago (Archipel). Cyprus (Cypre) sits in the Mediterranean, as does Crete (Candie).