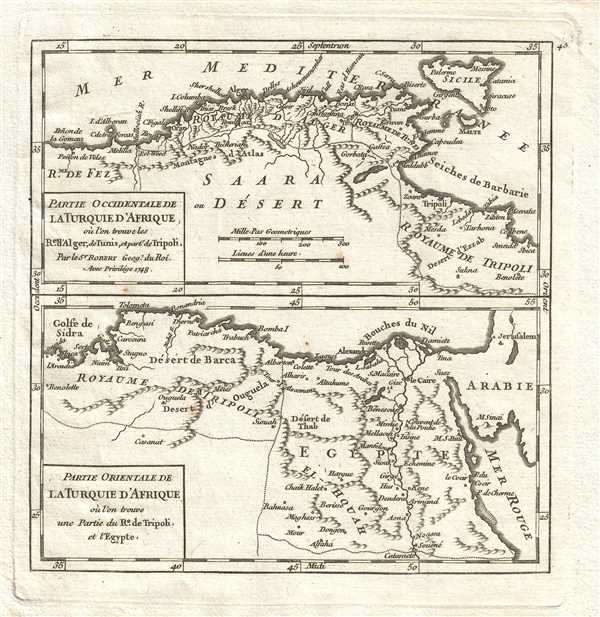 Map of North Africa including Algiers, Tunis, Tripoli, and Cairo.
$175.00

This is a pair of 1749 Gilles Robert de Vaugondy maps of North Africa. Both maps depict the African parts of the Ottoman Empire. The map at the top of the page stretches from Morocco (Royaume de Fez) to Libya (Royaume de Tripoli) and from the Mediterranean to the Sahara about half way into Algeria. The second map, below the first one, depicts from Libya to the Red Sea and Jerusalem and from the Mediterranean to the Egyptian border.

The top map focuses on modern-day Algeria and Tunisia. The Algerian cities of Algiers (Alger) and Constantine (Constantina) are labeled and the Royaume d'Alger hugs the Mediterranean coast, bordered on the inland side by the Atlas Mountains. Tunisia, the Royaume de Tunis also hugs the coast and both Tunis and Biserte are labeled. The map only covers part of the Royaume de Tripoli, Libya. Tripoli is depicted on this map. The vast blank space of the Sahara (Saara) occupies well over half of the map, allowing the viewer a glimpse into the scope of the desert.

The lower map focuses on the rest of Libya and all of Egypt. It also presents a rough sketch of the western portion of the Arabian Peninsula, to situate the map in a broader regional context. Cities are labeled along the Libyan coast, including Benghazi (Bengasi). The detail presented in Libya pales in comparison to that depicted in Egypt. Cities, including Giza and Cairo (Le Caire) dot the course of the Nile from the southern Egyptian border to its mouth in the Mediterranean. Alexandria is situated at the mouth of the Nile. Various mountain ranges are depicted in profile. Suez is labeled and the Red Sea is shown much larger than it is. In the rather blank space of Arabia, two locations are labeled: Jerusalem and Mt. Sinai.