1755 Vaugondy Map of European Turkey, Greece and the Balkans 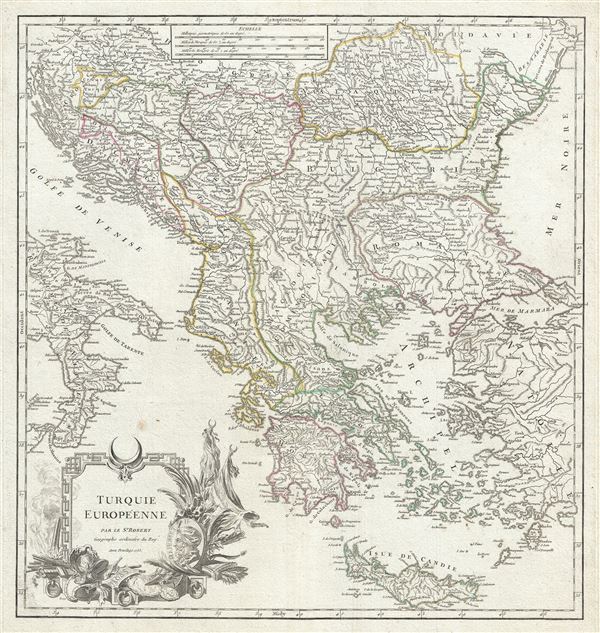 1755 Vaugondy Map of European Turkey, Greece and the Balkans

Map of Greece during the declining Ottoman Empire.

This is a beautiful map of Greece from De Vaugondy's 1752 Atlas Universal. Depicts the whole of Greece from Bosnia and Croatia east to through Bulgaria and Romania to the Black Sea and south through Macedonia, Albania and the Pelopenesus to the Isle of Candia or Crete. Includes Parts of Anatolia (Turkey) and the boot of Italy. When this map was drawn this region was dominated by the waning Ottoman hegemony. The Ottomans would nevertheless continue to exert a powerful influence on this region until the early 19th century.

the bottom left quadrant is decorated with an elaborate title cartouche. This map was drawn by Robert de Vaugondy in 1755 and published in the 1757 issue of his Atlas Universal. The Atlas Universal was one of the first atlases based upon actual surveys. Therefore, this map is highly accurate (for the period) and has most contemporary town names correct.

Very good. Some wear and toning along original centerfold, with minor verso repairs. Minor creasing, left of centerfold. Original platemark visible. Some spotting and offsetting with damp stain near margins.

Rumsey 3353.087. Pedley, Mary Sponberg Belle et Utile: The Work of the Robert de Vaugondy Family of Mapmakers, 367.
Looking for a high-resolution scan of this?