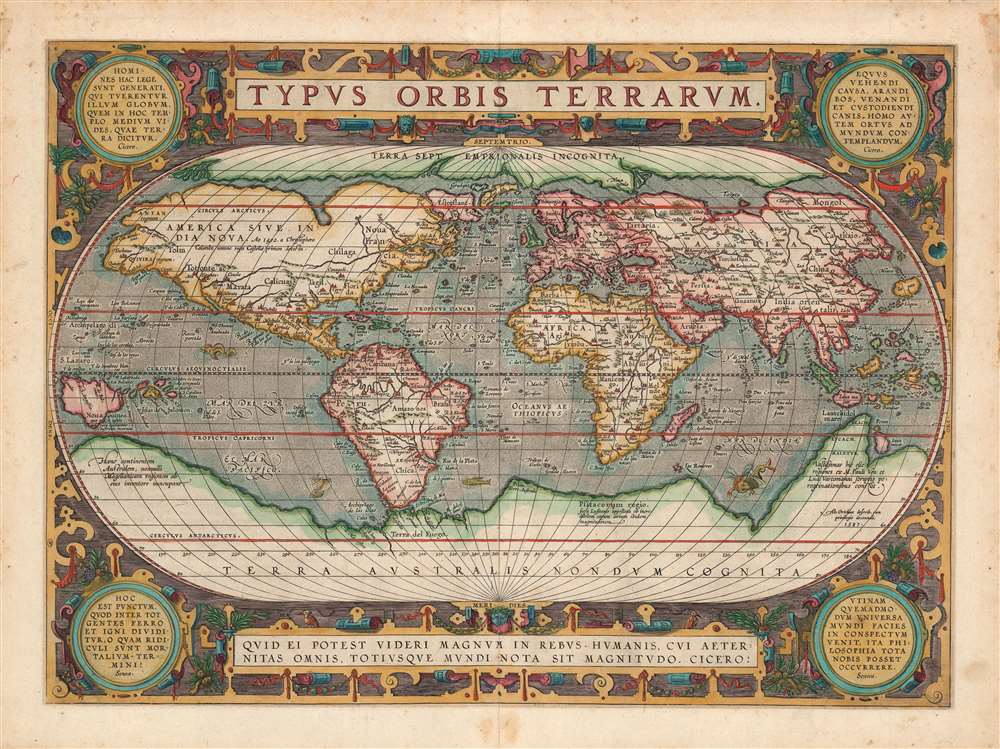 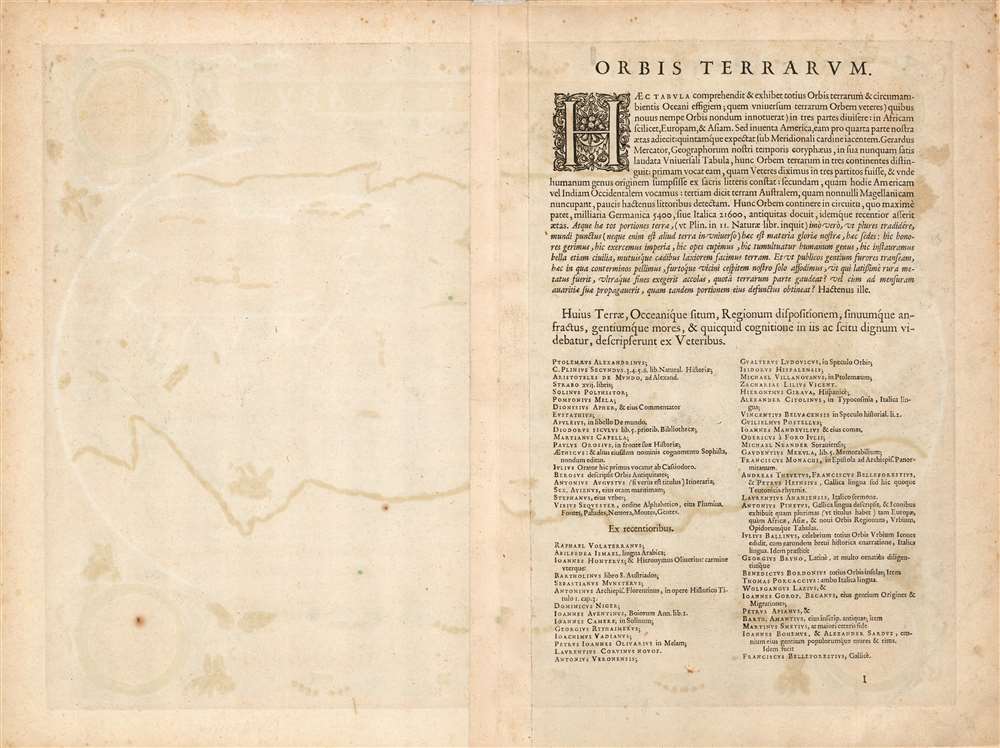 One of the most iconic maps of all time, this is Abraham Ortelius's 1589 map of the world, Typus Orbis Terrarum, here in the first state of the 3rd plate. This map was published in Ortelius' Theatrum Orbis Terrarum, the first modern published atlas. The map embraces the entirety of the known world and represented the most widely-disseminated and eagerly-copied image of the world available to the European reader at the end of the 16th century. In compiling this map Ortelius drew on the best cartography available, including Gerard Mercator's map of 1569, Giacomo Gastaldi's 1561 World Map, Diego Gutierrez's portolan of the Atlantic, as well as other works by Sebastian Cabot, Jodocus Hondius, Orontius Finaeus, Petrus Plancius, Gemma Frisius, Laurent Fries, and more.

The map exhibits a host of striking features, but perhaps none stand out more than the enormous continent massing at the base of the map identified as Terra Australis Nondum Cognita (Southern Land Not Known). Long before the discovery of Antarctica, the southern continent, supposedly capping the South Pole, was speculated upon by European geographers of the 16th and 17th centuries. It was thought, based upon the writings of Aristotle, that the globe was a place of balances and thus geographers presumed the bulk of Eurasia must be counterbalanced by a similar landmass in the Southern Hemisphere, just as, they argued, the Americas counterbalanced Africa and Europe. Many explorers in the 16th and 17th centuries sought the Great Southern Continent, including Quiros, Drake, and Cook, but Antarctica itself was not truly discovered until Edward Bransfield and William Smith sighted the Antarctic Peninsula in 1820.

Much of the more notable speculative geography here relates to interpretations of Marco Polo's Travels. Among these are a number of identified lands in Terra Australis, including 'Beach', 'Lucach', and 'Maletur'. All three locations appear in Polo's Travels, but where Polo was describing places in Java, later cartographers ascribed them to the speculative southern continent. This is probably related to a printing error in the 1532 edition of Polo's Travels wherein Java Minor appeared disproportionally gigantic. Attempting to reconcile the 1532 Polo geography with actual discoveries in the East Indies, cartographers relocated 'Beach', 'Lucach', and 'Maletur' were further south and attached them to the Southern Continent.

Similarly, the land of Anian is identified in the far northwestern part of American in what might today be considered a proto-Alaska. At this time no European navigator had explored these extreme Arctic seas but again, cartographers turned to Marco Polo. Polo described a Chinese province named Ania located on a large gulf. This was in fact the Gulf of Tonquin, near modern day Vietnam, which then was referred to as Anian. Polo's description was vague enough that the cartographer Giacomo Gastaldi transposed in to the northwest coast of American on his world map of 1562. This error was followed by numerous subsequent cartographers including Zaltieri, Mercator, and of course, Ortelius. The identification of this region as Anian persisted until the late 18th century when more comprehensive exploration of the Pacific Northwest spearheaded by Captain James Cook shed more light on the region.

Cities of Gold and other Wondrous Places

Also in North America, several cities appear, among them Quivara (Quivira), Cibola (Ceuola), Tiguex (Teguayo), Totonte, Axa, and Granata – these are known in aggregate as the Seven Cities of Gold. The origin of the Seven Cities may connect to legends of Antilla, a mythic island that appears on some early portolan charts of the Atlantic and even appears here on Ortelius's map at the center of the Atlantic as Sept Cites (Seven Cities). The legend describes how when the Moors invaded Porto in the early 8th century, the city's seven bishops took all of their wealth and fled to the sea. They prayed to god and were granted a refuge in the form of a magical paradise in the Atlantic where each bishop established a mighty city. When navigators failed to discover Antilla in the Atlantic, legends pushed the Seven Cities further west into unexplored lands north of Mexico. Years later, the gold and glory-seeking conquistador Hernando Coronado ploughed through the region with a massive army sacking several Zuni Pueblos (generally associated with Cibola) and a city on the Great Plains known as Quivira, but failed to find the gold he sought.

Far to the north an open Arctic Sea passage winds its way around the globe. This is the much sought-after Northwest Passage (to the north of America) and Northeast Passage (over Asia). Such passages could provide quick access to the rich markets of Asia, which offered both an outlet for European silver and furs from the American colonies, as well as produced spices, silks, and other trade goods coveted in Europe. When Ortelius drew this map, no one had successfully navigated such a passage, but many scholars argued that it must exist. Countless explorers lost their lives in search of the apocryphal routes. Ironically, while it is true that ice conditions in the high Arctic meant that in Ortelius' time no such passage existed, today, with global warming reducing the size of the Polar Ice Cap, a navigable passage has indeed formed.

This map exists in three plates, all of which were published in editions of the Theatrum Orbis Terrarum, the world's first proper atlas. The first plate appeared in 1570 and was engraved for Ortelius by Franz Hogenburg, a Flemish map engraver and artist. That plate was used in the first 16 editions of the Theatrum. The lower left corner cracked in 1575 and was fixed several times yielding five different states.

A second plate was engraved in 1586 and is dated such. The third plate/edition, first state, (the present example) was engraved in 1587 and is dated such. This plate is notable for the addition of corner medallions and a new border. It was not include in the Theatrum until it appeared in some copies of the 1589 German edition, and then not again until the 1592 Latin edition (with which the present example corresponds.) Six examples of this edition of the separate map are catalogued in institutional collections. Perhaps thirty-six examples of the the complete volume of this edition are listed in OCLC.

Ortelius, A., Theatrum Orbis Terrarum, (Antwerp: Ortelius), Latin Edition, 1592 L1.     Abraham Ortelius' magnum opus, Theatrum Orbis Terrarum, was the world's first regularly produced atlas, which 'set the standards for later atlases . . . It was the first undertaking of its kind to reduce the best available maps to an uniform format.' (Koeman) A modestly-sized work of fifty-three maps in its first edition of May 1570, it was an immediate success: there were three further editions that year, and the work remained in print for a total of 32 editions, the last of which was 1641, well after its author's 1598 death. Ortelius added to his atlas constantly, and by 1595 the Theatrum contained 147 maps. Ortelius is renowned generally as an editor, and indeed much of the Theatrum is compiled from a variety of sources: in such cases, Ortelius was scrupulous in naming his sources. But Ortelius was also a mapmaker in his own right: many of his maps are a distillation of various sources into his own work, and there were many maps - particularly in his atlas of Biblical and ancient history Parergon - which were entirely Ortelius' work. In his role as an editor, Ortelius followed in the footsteps of Munster, whose Cosmographia was, until Ortelius, the best window on the world for the curious European reader. In terms of the artistry of his maps, Ortelius oversaw the first great flourishing of copperplate engraving in the service of cartography to occur in Northern Europe. Ortelius' work provided the model for the atlases of Mercator, Hondius, Blaeu and all their progeny in the 17th century - many of whom were to produce faithful editions of Ortelius' maps in their own productions.