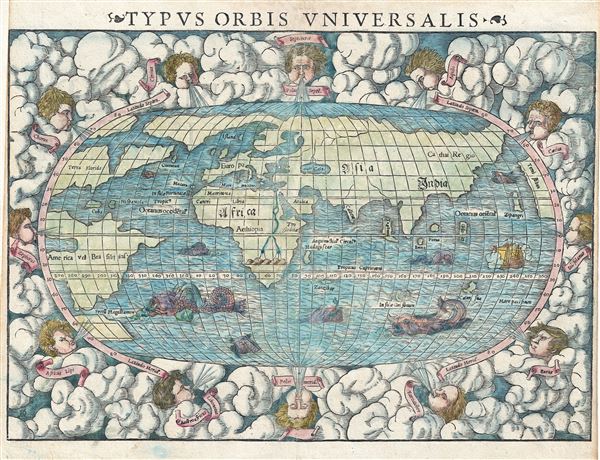 One of the most recognizable maps of the 16th century, this is a fine colored example of Sebastian Munster's 1550 map of the world - considered the first map to identify the Pacific Ocean or, as here, 'Mare Pacificum.' This is the world of the educated 16th century European. It is divided into Asia, Europe, India, Africa and America. The southern latitudes are inhabited by a variety of sea monsters - Munster's Monsters, as it were.

Europe is vaguely recognizable and connected, via an arctic peninsula, to Greenland and North America.

Asia extends eastward far enough to reappear just north of America. Ceylon is not present, but a landmass bearing roughly the shape and poison of Sumatra is identified as Tapobrana (a term more commonly associated with Ceylon). Japan appears as Zipangri.

Africa follows the Ptolemaic model with the Nile finding its source in a mountain range and two associated lakes.

America is nearly unrecognizable. North America is defined as Terra Florida. The enormous inlet extending towards the eastern seaboard in the vicinity of modern day North Carolina is Verrazano's Sea. Apparently Verrazano, coasting the Outer Banks, observed the Pamlico Sound and assumed that beyond the narrow coastal banks, an open sea gave direct access to the pacific - wishful thinking at best. Verrazano's Sea appears so dramatically on few maps, but persisted in lesser forms for nearly a century.

South America seems like an octopus with tentacle like protrusions in all directions. It is largely amorphous, but the Rio de la Plata and the Strait of Magellan are clear. Tierra del Fuego is enormous, but appears not to be attached to the greater Terra Australias - an interesting and telling choice on Munster's part.

The whole is surrounded by twelve named wind heads - one for each direction. This map was published by Sebastian Henric Petri in the 1550 edition of Munster's Cosmographia. This is the second of three world map produced for Munster - the first having been issued in 1540.