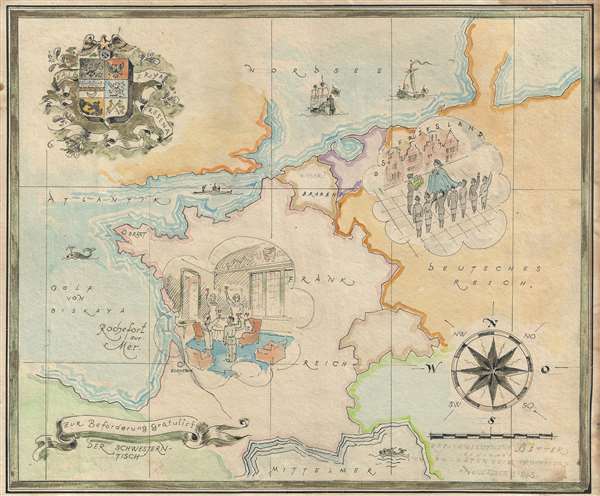 This is a charming 1943 manuscript map of Europe was drawn to celebrate the promotion of the German World War II Kriegsmarine officer Kapitänleutnant Georg von Bitter to U-Boat Commander. Drawn in a whimsical manuscript style, with stylistic elements drawn from 18th century French cartography, the map, which is centered on France, covers much of western Europe, including Germany, Switzerland, France, Holland, Belgium, and parts of England, Spain, Denmark, and Italy.

The map appears to have been drawn by one of the nurses at the Rochefort Soldatenheim, or Soldier's Home, in Southwest France, a region then under direct German occupation. It commemorates the promotion and imminent departure of Bitter, who was a resident there in the latter part of 1943. Although Bitter received his promotion and assignment to U-750 at the end of September 1943, he did not depart the soldier's home until November when he was presented with this charming pictorial map.

The map illustrates the palatial dining room of the Rochefort Soldatenheim, where Bitter, along with three nurses - and an exceptionally privileged terrier dog seated at the dining room table – enjoy a raised glassed of red wine. Another illustration, in the upper right, illustrates Bitter in full U-Boat commander regalia being saluted by seven female officers while presented with a bouquet by an eighth. From this we assume that Bitter must have been quite charming with the ladies. Bitter's U-Boat appears just off the coast of France in the English Channel. Bitter did not undertake any patrol missions and sunk no ships. He died shortly afterwards in 1945 when a fire broke on the wohnschiffes (accommodation ship) Daressalam in Kiel harbor.

Other than a tiny swastika integrated into the heraldic crest of the Kriegsmarine in the upper left quadrant, the map bears no discernable allusions to the sordid political associations related to Nazi Germany.

As a final note, we have identified the officer referenced in the maps as George von Bitter, based upon his records of assignment and other factors. The figure could also be Otto Bitter, another U-Boat commander active roughly at the same time. Both have counter indications. George von Bitter, here identified as Kapitänleutnant, never actually attained a rank higher than Oberleutnant. Nonetheless, the record of his assignments mesh more closely with the dates on the map than that of Otto Bitter who did not receive a U-Boat assignment until February of 1944. Also, Otto Bitter, who did in fact attain the rank of Kapitänleutnant, did not do so until January of 1945, one year after this map was made. Finally, the figure in the image on the map appears to have dark hair, corresponding with more with Georg von Bitter as Otto Bitter had light blond hair.