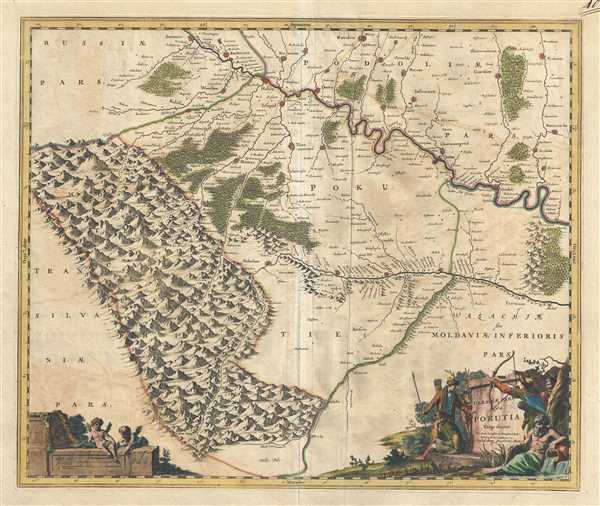 This is a scarce c.1721 Covens and Mortier edition of the map of the western parts of Ukraine and vicinity. It covers the historic area of East-Central Europe known at the time as Pokuttya or Pokkutia. It covers from the Carpathian Mountains east along the Dniester River east to Moldova. Includes parts of Poland including Krakow. The entire map is depicted in extraordinary detail, offering both topographical and political information, with forests and mountains beautifully rendered in profile.

This map was originally based on Guillaume le Vasseur de Beauplan’s map. Beauplan, commissioned by the King of Poland, produced detailed maps of the Ukraine, based on his surveys. Later, Joan Bleau created four maps of Ukraine based on Beauplan’s work detailing the regions of Pokuttya, Podillya, Bratslavschyna and Kyiv. This is the first map in that series. The map was printed shortly following the 1721 Covens and Mortier acquisition of the original plates.

Very good. Overall age toning. Minor wear and fading along original centerfold. Verso repair at a couple of places, including along centerfold. Some spotting.