1716 Homann Map of the Black Sea and Ukraine 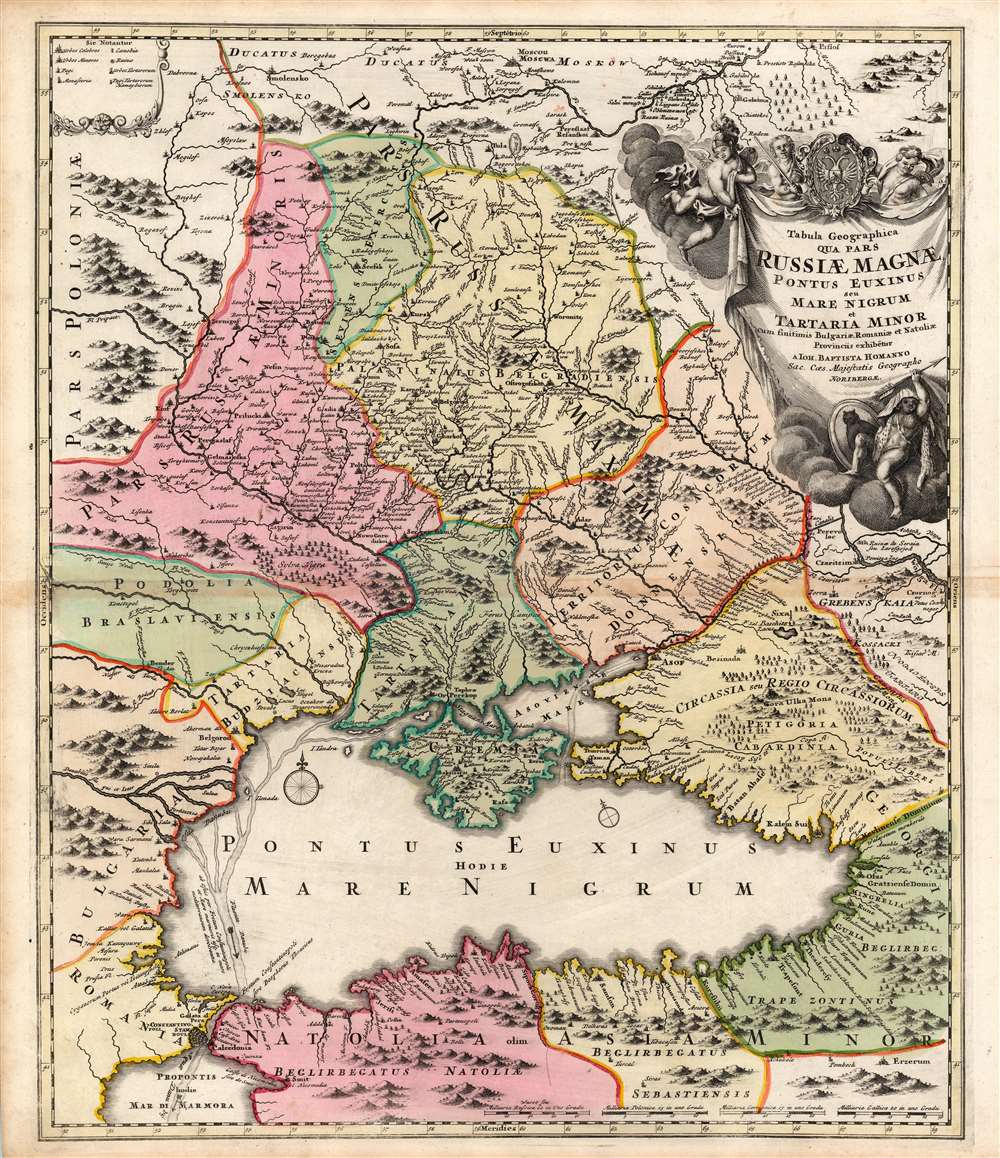 1716 Homann Map of the Black Sea and Ukraine

Territorial Ambitions of Imperial Russia in the Ukraine.
$650.00

This is a beautiful original color example of Johann Baptist Homann's 1716 map of the Black Sea region, including modern-day Ukraine, Moldova, and Russia. The map was produced during the reign of Peter the Great, when Russia actively warred with Sweden, the Crimean Tatars, and the Ottoman Turks. The region from the Don River on north to Moscow is here designated Russiae Maximae - or 'Greater Russia' thus expressing the extent of Peters ambitions.

Peter the Great's Expansion to the Black Sea

Among the ambitious Peter's goals was to gain access to warm water ports: the only port at the beginning of his rule was Arkhangelsk, on the White Sea. The Baltic was controlled by Sweden, and the Black Sea and the Caspian were part of the Ottoman Empire and Safavid Empire, respectively. In the North, the Great Northern War (1700 - 1721) resulted in the founding of Saint Petersburg along with a significant decline in Swedish power. In the present map, Peter secured the passage of Kiev to Russia from Poland. Thereafter Peter waged war against the Crimean Khan Tatars and the Ottoman Sultan in effort to capture of the Ottoman fortress of Azov, thus controlling the mouth of the Don River - a feat he achieved in 1696. Homann has included crossed-sword symbols at several points to indicate important battles. One at the mouth of the Don corresponds to Peter's capture of Azov; another appears at the southwestern part of Tartaria Minor. The absence of such a symbol at Poltava is a strong indication that this map was engraved prior to the 1709 Battle of Poltava, the culminating battle of the Great Northern War.

The engraving is sophisticated and attractively executed, showing mountains evocatively and pictorially. In addition to the many rivers, Homann's map includes currents of those rivers as they extend into the Black Sea, and out into the Propontis.

The map is embellished with a superbly engraved cartouche, framed in clouds and surmounted with the arms of Imperial Russia. Flanking the Russian arms are a trio of putti, one helmed in imitation of Ares, and one all-too-enthusiastically brandishing a sword. At the foot of the cartouche, a dark-skinned putto sits upon a cloud wearing skins and waving an arrow. The owl-painted shield beside him indicates that this putto represents the Tatar Empire.

This map was engraved as early as 1705 for inclusion in Homann's atlases. This example corresponds to 1716 editions of Homann's Atlas Novus Terrarum Orbis Imperia Regna.

Very good. Marginal mend, some toning along centerfold, else excellent with a bold strike and original wash and outline color.