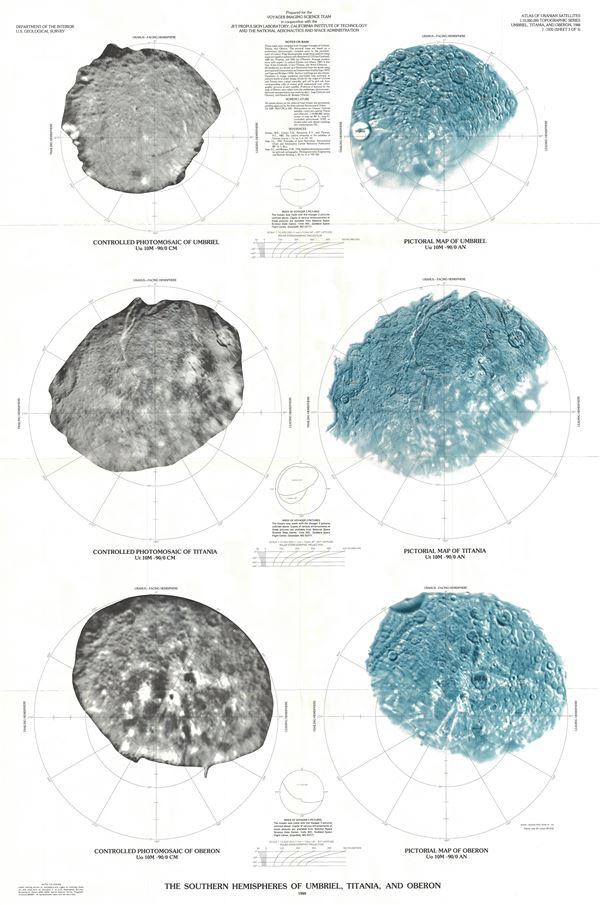 This is an impressive 1988 U.S. Geological Survey map of the southern hemispheres of Umbriel, Titania and Oberon, three of the Uranus' moons. The map contains three pairs of images. The first pair in the top section of the map depicts a photomosaic and a pictorial image of Umbriel, the third farthest of Uranus' five major moons. The Wunda crater, which is a ring of bright material and Umbriel's most striking feature, is identified here. The second pair of images in the center of the map represents a photomosaic and a pictorial image of Titania, the largest moon of Uranus. The Messina Chasma, a large canyon of the surface of Titania is identified here. The third pair of images in the bottom section of the map features the photomosaic and pictorial image of Oberon, the second largest and the outermost of the five major moons of Uranus. The largest crater on its surface, Hamlet, is identified in this map. This map is based on the images from the spacecraft Voyager 2, which helped map approximately 40% of the surface of these moons.

This map was prepared for the Voyager Imaging Science Team in cooperation with the Jet Propulsion Laboratory, California Institute of Technology, and the National Aeronautics and Space Administration and published by the U.S. Geological Survey as Atlas of Uranian Satellites Topographic Series map I-1920 sheet 3.