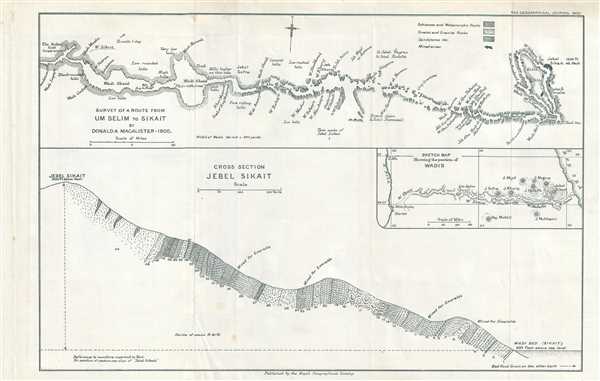 Depicts a trek to 'Cleopatra's Emerald Mines' - once exploited by both the Ptolemaic Egyptians and the Romans.

This is a 1900 Donald A. MacAlister route map from Um Selim to the Sikait District in Egypt. Incredibly detailed, MacAlister notes numerous waypoints in his party's trek from Um Selim to Jebel Sikait along several wâdis. Different rock formations are noted along the trek, including metamorphic and granite formations. A cross section of Jebel Sikait is included below the route map, along with an inset map of the wâdis in the region.

The Expedition and the Emerald Mines

Equipped by Edwin Streeter of Streeter and Company, a London-based jeweler, MacAlister and his party were charged with investigating 'the so-called 'Cleopatra's Emerald Mines'.' Known since the time pf the Ptolemaic Egyptians, these mines had been exploited by both the Egyptians and later by the Romans. They were 'rediscovered' by Frederic Cailliaud in 1817 but had unsuccessfully been exploited over the next century by various different commercial ventures. By 1899, Edwin Streeter held a concession to work the mines, leading to the outfitting of MacAlister's party. Sikait is located only 15 miles from the Red Sea 'as the crow flies' per MacAlister.

This map was drawn by Donald A. MacAlister and published in the Geographical Journal by the Royal Geographical Society in 1900.

Very good. Even overall toning. Slight wear along original fold lines. Blank on verso.
Looking for a high-resolution scan of this?