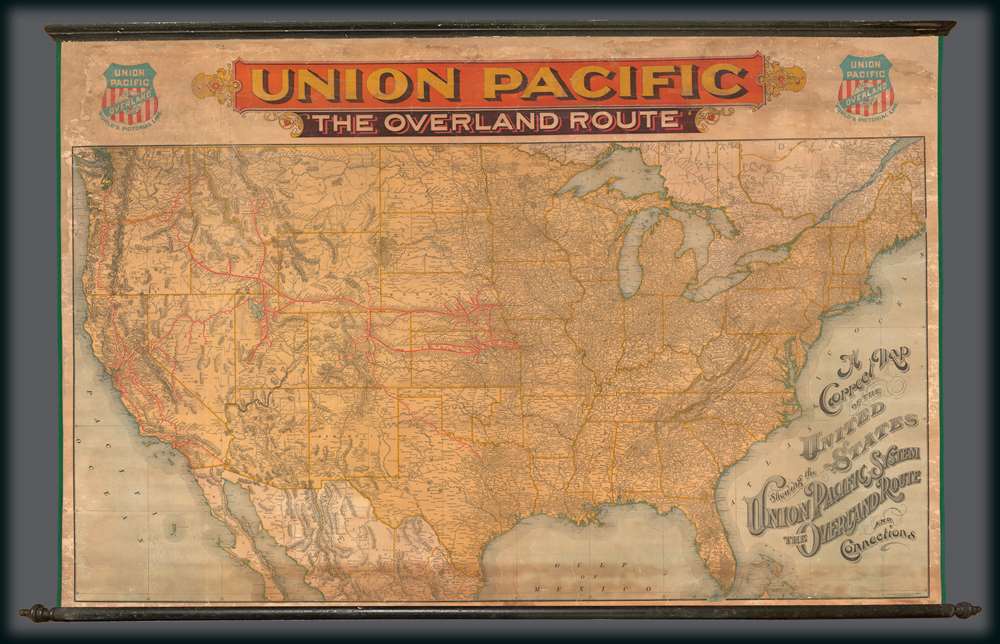 This rarity is a large format 1896 wall map of the United States issued by Rand McNally and Company on behalf of the Union Pacific Railroad. This scarce railroad map was issued exclusively for company use at larger stations, and was not publicly distributed, hence its extreme rarity. The map embraces the whole of the United Sates, illustrating the routes of the Union Pacific Railroad and its many subsidiaries, as well as, in some cases, important connecting routes operated by competing railroads. The map's focuses are the Union Pacific Routes westward from hubs in Kansas City, Leavenworth, St. Joseph, Council Bluffs, and Sioux City.

The Union Pacific: The Overland Route

The Union Pacific Rail Road was founded in July of 1862, in the midst of the American Civil War. It was constructed in two parts, westward from Council Bluffs, Iowa to meet the Central Pacific Railroad line, which was constructed eastward from Sacramento, California. The Golden Spike was driven by railroad tycoon Leland Stanford at Promontory Summit, Utah Territory on May 10, 1869, connecting the lines and creating first transcontinental railroad. Combined, the Union Pacific-Central Pacific Railway line became known as the 'Overland Route.' Nonetheless, by 1896, the Union Pacific was no longer the only fully linked line leading westward, as both the Northern Pacific and the Southern Pacific were in operation, and to the credit of the mapmakers both appear, if in de-emphasized forms. Even so, none of the competing routes offered the size and flexibility of the Union Pacific. By the early 20the century the Union Pacific had absorbed most competing lines and is today one of the world's largest railroad concerns.

The map was published by the Rand McNally Company in Chicago on behalf o the Union Pacific Railroad. It is rare and likely issued in small quantities for use only in large railway stations. We have been able to isolate examples at the University of Kentucky and at the Denver Public Library. There appears to be but one edition.