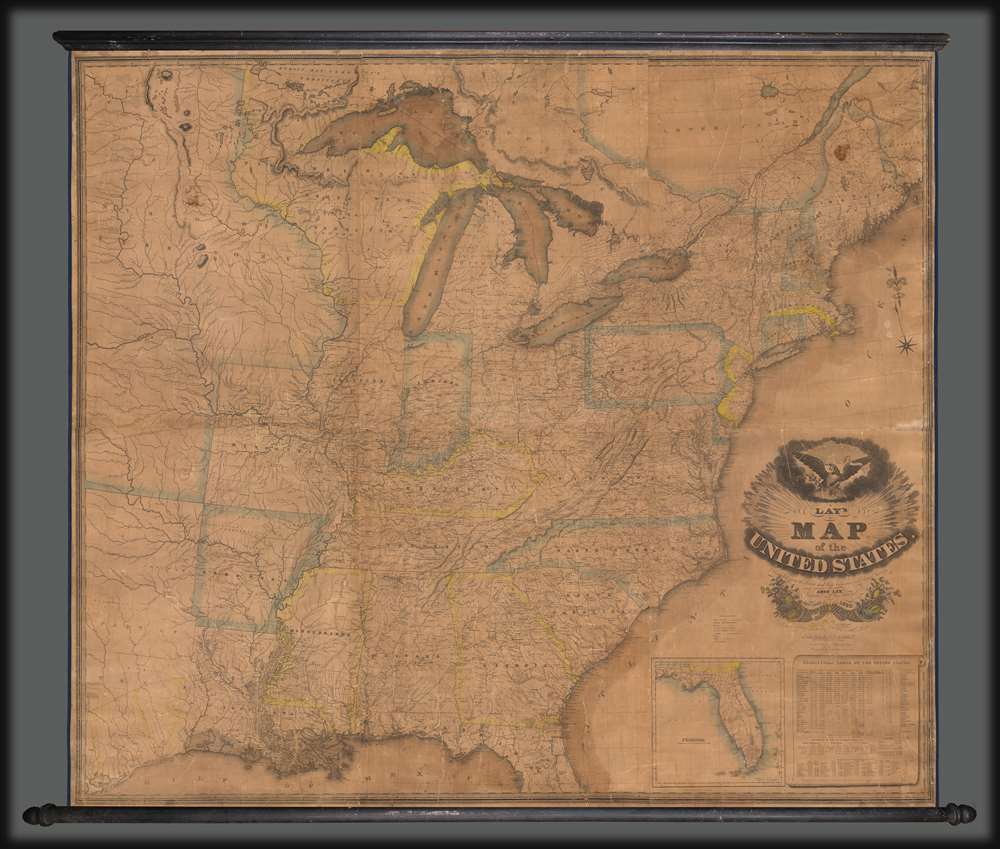 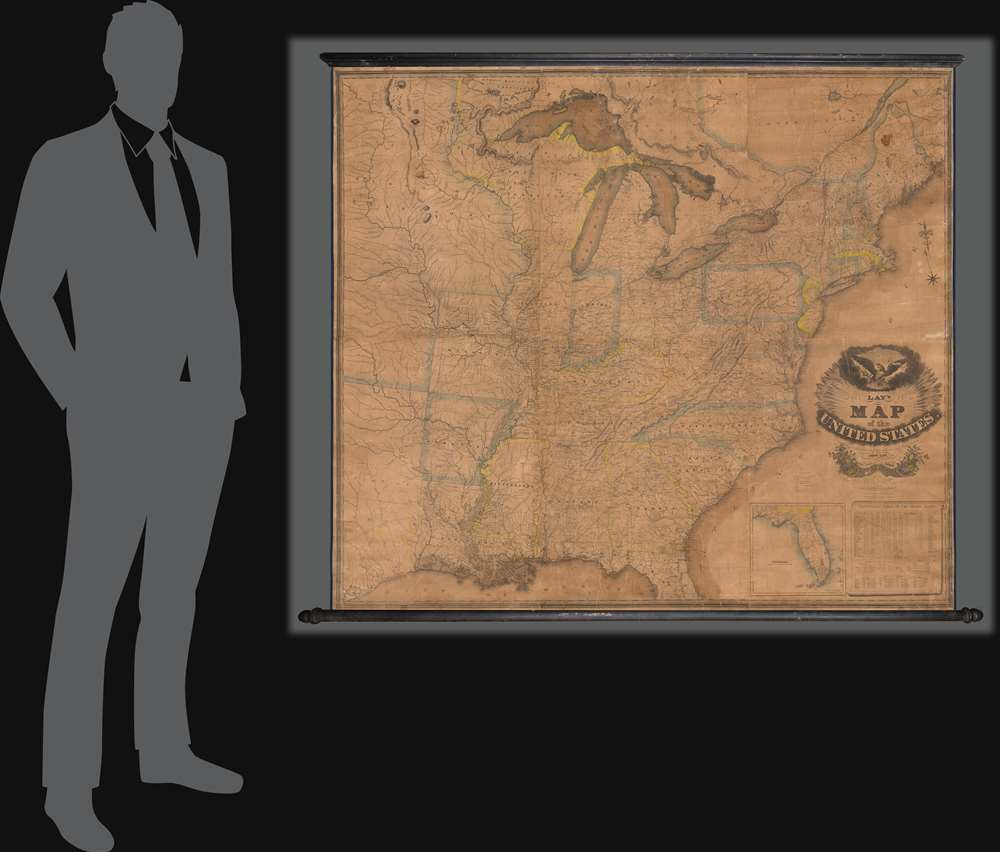 This 1832 map by Amos Lay is one of the earliest and largest American wall maps. The map presents the United States during a period of rapid expansion following the Louisiana Purchase (1803) but predating the Texan Revolution (1835 - 1836) and the territorial gains that followed the Mexican-American War (1845 - 1848). It is one of the earliest maps to illustrate Texas Land Grant, including Steven E. Austin's grant (1827), Austin's Colony, and the Empresario grants of Zavala, Vehlein, and Burnet - see below. Likewise in Florida multiple land grants are noted, making it one of the more comprehensive catalogs of early grants there we are aware of: the Alachua Grant (Arredondo), General Lafayette's Grant near Tallahassee, Arredondo's first grant near Tampa, the Delespino Grant, Miranda's Grant, and Flemming's Grant - see below. This map, moreover, depicts the United States during the great age of canals, when man made inland waterways were the key to a nationwide logistic infrastructure.

The map embraces the present-day United States to well beyond the Mississippi River, including the eastern pre-revolutionary Texas, the Missouri Territory to roughly Fort Mandan, and Arkansas. The entirety of the Great Lakes and southeastern Canada are included. The map reflects a long period when no new states had been added for several years, but when the existing mid-western states and the territories were developing. The Northwest Territory includes Michigan's Upper Peninsula, Wisconsin, and the portion of Minnesota east of the Mississippi River; and present-day Lower Michigan is Michigan Territory. An expansive Missouri Territory flows off the page to the left. Florida is shown only partially in the main map but in its entirety in an inset at lower right.

In the early 19th century Spain instituted a series of reforms intended to settle and develop Texas, the most significant of which occurred in 1820, when it began to allow colonists of any religion (previously they had to be Catholic) to settle. The only colonist to receive land under the Spanish system was Moses Austin (1761 - 1821), who claimed his grant in 1820, only to die a year later in 1821. In that same year, 1821, the Mexican War of Independence (1810 - 1821) ended with Mexican independence from Spain. The new Mexican government continued the reforms, instituting the Texas Empresario system. Stephen F. Austin (1793 - 1836) took over his father Moses's grant and began an aggressive campaign to draw English speaking protestant settlers to Texas. Austin's efforts were aided by the Mexican Provisional Government, who approved the 1824 General Colonization Law authorizing all heads of household who were citizens or immigrants to Mexico to claim land. After the law passed, the government was inundated with requests by foreign speculators to establish colonies - many of whom received grants of their own. In the wake of the Panic of 1819, United States underwent an extended period of inflation marked by soaring land prices. Texas, with vast tracks of arable land, warm climate, and free grant system, became an extremely attractive prospect. Austin's drive to populate Texas with English speaking settlers was thus enormously successful. Conflicts between the English protestant 'Empresarios' and the Catholic Mexican government ultimately led to the secession of Texas and the Mexican American War.

Beginning in the 1790s, the Spanish crown offered land grants to people courageous enough to emigrate to Florida or for meritorious service to the crown. Fernando de la Maza Arredondo (c. 1760 - 18??) received multiple grants, including one near Tampa, and another west of St. Augustine, named here Alachua. It was granted to Arredondo in 1817 by Alexander Ramirez of Havana. Miranda's Grant, after Pedro Miranda, a Spanish sailor, is in the vicinity of modern-day Tampa. Another was granted to George Fleming, an Irishman who in 1816 was awarded a 20,000-acre land grant from the Spanish Government on Florida's east coast, near the San Sabastian River. After Florida became a possession of the United States in 1821, these grants became a point of contention between the United States government and the grantees. Initially, the U.S. government declared that it would honor the grants as long as the owner could prove legitimacy. Miranda, Arredondo, and Flemming took their cases to the United States Supreme Court, where their rights to the land were affirmed. Eventually, nonetheless, both grants were dissolved by U.S. courts on the basis that they were not properly developed and therefore forfeited.

This map was first published in New York in 1827 by Amos Lay. It was engraved by Orramel Hinckley and H. L. Throop, and William Chapin, with Orramel specifically engraving the title cartouche. The copyright is dated May 8, 1827. We are aware of subsequent editions issued in 1829, 1830, and 1832. They may be more. Each edition features minor updates and corrections. All examples are scarce to the market.

Amos Lay (1765 - 1851) was an American surveyor, cartographer, and engraver active in New York in the late 18th and early 19th centuries. Lay was born in New Hampshire. He began his career as a survey in Vermont and New Hampshire, where he worked as a land agent promoting properties in Ontario. He surveyed along the St. Lawrence in Franklin and St. Lawrence counties. His first map, published in 1801, is a large format map of New York compiled with Arthur J. Stansbury. He subsequently issued a larger map of New York in 1812, and in 1827, a large wall map of the United States. Learn More...


William Chapin (1802 - 1888) was a prominent New York and Philadelphia based engraver active in the early part of the 19th century. Although we know little of Chapin's early years, he seems to have been an apprenticed from 1817, at the age of 15, to John Vallance in the Philadelphia firm Tanner, Vallance, Kearny & Company. This firm, which is responsible for Tanner's early maps and atlases, had a substantial cartographic corpus. There are records to indicate that Chapin purchased his freedom from Vallance for 125 USD in 1822. In time, he established a significant engraving business under his own name, and with a heavy focus on cartographic material, in both Pennsylvania and New York. Fielding suggests that Chapin's large map of the United States is in fact the first American published map to be engraved steel. Around 1839, Chapin seems to have changed careers when he accepted a position as Commissioner of Public Schools in New York. In this capacity, Chapin developed an interest in working with and teaching blind children. Chapin served as headmaster of several schools for the blind in Ohio and New York. His most significant work with the blind took place at Overbrook School for the Blind, where he developed contemporary techniques for teaching and published the first dictionary for the blind. (Fielding, M. & Carr, J. Dictionary of American Painters, Sculptors, and Engravers, p. 61.) Learn More...


Orramel Hinckley Throop (June 12, 1798 - 1860) was an American engraver, silversmith, and painter active in New York, Portland, Maine, and New Orleans. Throop was born in Oxford, New York. He first attempted to establish himself in Portland, Maine, with is brother D. S. Throop, where he engraved maps, trade cards, banknotes, and certificates. He was connected with the Masonic Lodge there and much of his work came through the Masonic network. He moved New York around 1825 and had an office at 172 Broadway, and there engraved for several prominent publishers. In 1828 he painted a portrait of Andrew Jackson. The then relocated to New Orleans around 1831, and remained there until about 1834. Learn More...