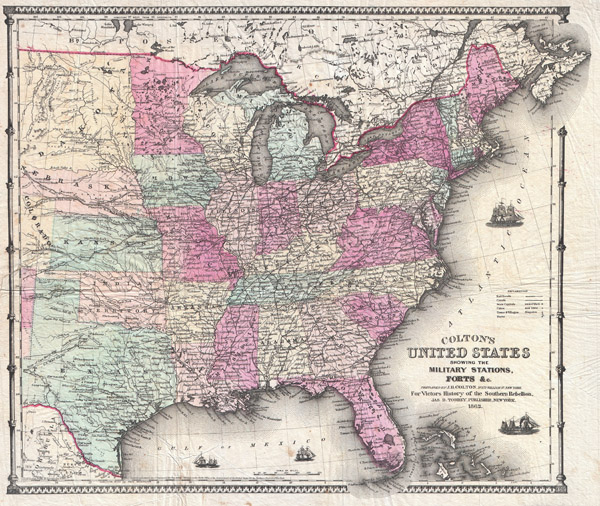 A scarce and extremely attractive pocket map of the United States by J. H. Colton. This map was issued in 1862, in the midst of the Civil War, for inclusion in Victor's History of the Southern Rebellion. Depicts the United States as far west as Texas and Colorado. Features a distended Nebraska, no Wyoming, and a large Dakota Territory. Virginia is undivided. Extends south as far as the Bahamas and the Florida Keys. Shows the Pony Express Route, the U.S. Mail Route, and the tracks of various Civil War military campaigns. Forts are indicated with little flags. Four sailing/steam ships decorate the seas. An attractive decorative border surrounds the map. Colton based this map, with updates to reflect the changes of the Civil War, on the 1855 Map of the United States that appeared in his 1855 issue of Colton's Atlas of the World. Dated and copyrighted: 'Entered according to the Act of Congress in the Year of 1855 by J. H. Colton & Co. in the Clerk's Office of the District Court of the United States for the Southern District of New York.' Published from Colton's 172 William Str. Office in New York City. Exceedingly rare.