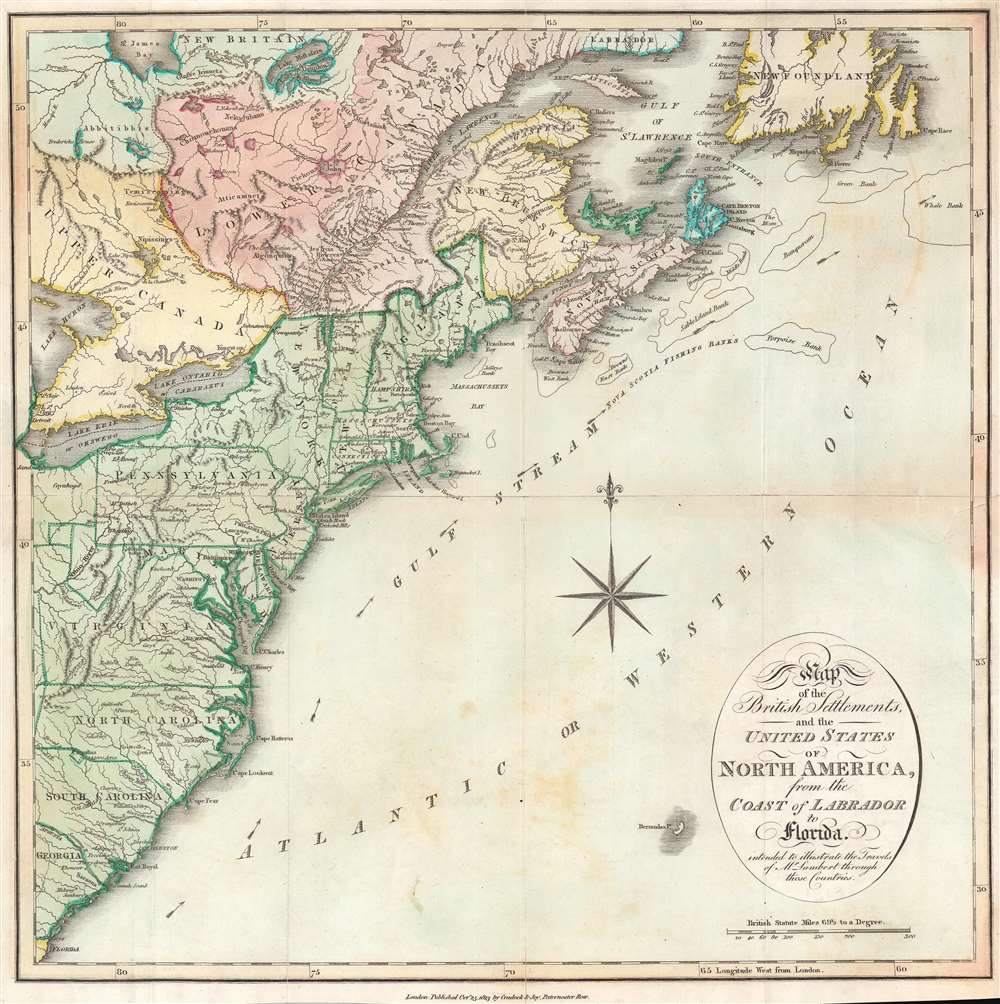 The Ohio Company of Associates and Virginia Military Tract.
$550.00

This is an 1813 Cradock and Joy map of the United States and Canada issued to accompany the first volume of John Lambert's Travels through Canada and the United States of America, in the years 1806, 1807, and 1808. Coverage extends along the Eastern Seaboard from the Gulf of St. Lawrence to roughly St. Augustine, Florida, embracing the Canadian Maritimes, the United States as far west as Ohio and Lake Erie. Of note, Washington D.C. is named, as the Federal government occupied the capital in 1800.

The land claims of Ohio Company (Ohio Company of Associates) and the Virginia Military District are noted, but the borders indicated to not fully coincide with the actual patents. Both of these land patents were settled primarily by Revolutionary War veterans, although one was private, and the other a government operation. The Ohio Company of Associates was a private land development scheme focused on the Ohio Valley. Members represented the first non-Native Americans to settle in present-day Ohio. The nearby Virginia Military District was a 4.2 million acre area reserved by Virginia as payment for its Revolutionary War.

John Lambert came to America in 1806, apparently accompanied by a relative sent by the British Board of Trade to promote hemp cultivation in Canada. He traveled from Savannah, Georgia along the East Coast to the St. Lawrence Valley, where he spent about a year. He offers insightful commentary on American political figures, slavery, and the differences in character between 'southerners' and 'northerners'.

This map was published by Cradock and Joy in the 1814 second edition of John Lambert's Travels through Canada and the United States of America, in the years 1806, 1807, and 1808.

Baldwin and Cradock (fl. c. 1810 - 1860) were London based publishers working in the early to mid 19th century. They are best known for their publication of the Society for the Diffusion of Useful Knowledge's ground breaking subscription atlas. They also published John Thomson's magnificent New General Atlas from 1814 - c. 1820. In addition to their cartographic corpus, the firm had wide ranging publishing interests in many other areas, including books, broadsides, and an investment in Blackwoods Magazine. They had their offices at 47 Paternoster Row, London, England. This firm also published under the imprint Baldwin, Cradock, and Joy and Cradock and Joy. Learn More...

Very good. Verso reinforcement along original fold lines. Transference.
Looking for a high-resolution scan of this?