1799 Cruttwell Map of the United States of America 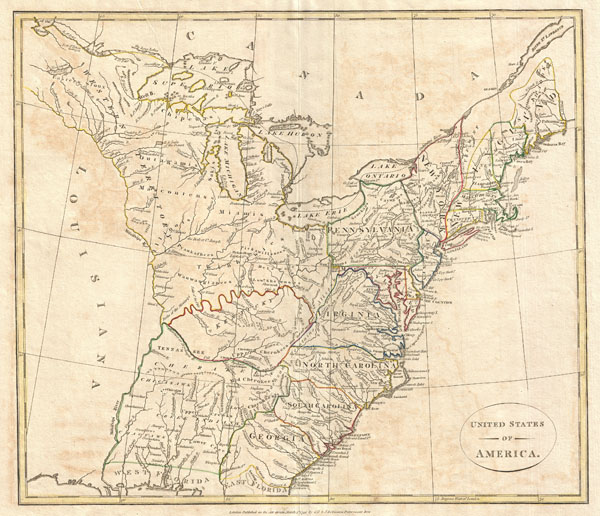 1799 Cruttwell Map of the United States of America

Scarce map of the post-Revolutionary United States with the 14th colony of Sagahaddok.

This is a highly unusual and extremely scarce 1799 map of the United States by the English map publisher Clement Cruttwell. Depicts a post-colonial pre-Louisiana United States extending from the Mississippi River to the Atlantic seaboard and from Florida to Canada. Though clearly based on Guthrie's c. 1780s map of the same title, this map offers a number of important innovations and updates that make this a significant cartographic piece in its own right. This map exhibits a combinations of up to date cartographic information and references to mid 18th century colonial charters.

Further north another interesting example is the additional territory of Sagahadok occupying much of modern day Maine's northern tier. Sagahadok or Sagahadoc, is the legacy of an early 17th British effort to colonize North America. Technically Sagahadoc refers to the territory between the Kennebec River and Nova Scotia. In the few mid 18th centurymaps that actually show Sagahadoc, such as Faden's map depicting the United States according to the 1784 Treaty of Paris, the region is depicted as a territory attached to the Massachusetts Colony. However, by this time it has been fully separated from Massachusetts and is drawn as a separate colony. The appearance of Sagahadoc may be related to a post Revolutionary War British attempt to add this part of northern Maine to their Nova Scotia Colony, referencing an early claim to the territory dating from its original failed 1620 colonization attempt. Similarly, Vermont, through clearly identified in its present location, is here added to British controlled Canada.

In the southwest a fledgling Kentucky appears with a northern border adhering to the Ohio River and a southern border encompassing much of today's Tennessee. Though at this time there were many American Indian groups still active in Kentucky, including the Upper Cherokee and Tennessee tribe, most, with the incorporation of the state, were relocated south of the Tennessee River. This is evident in the large unnamed territory extending as far south as West Florida and occupying much of what is today Mississippi, Alabama, and Georgia. Within this region numerous American Indian nations are identified including the Tennessee, Cherokee, Creek, Choctaw, Chickasaw, and others.

Along the Eastern seaboard Georgia, South Carolina, North Carolina and Virginia appear roughly in their current configuration though are clearly bounded on the west by the Appellation Mountains and, in the case of Georgia, the Flint River. In the south, East and West Florida are at this time disputed territories passing back and forth between British and Spanish control.

The extreme northwest, comprising the vast territory north of the Ohio River and west of Pennsylvania, including the Great Lakes, is identified as the Western Territory. As with the unnamed territory to the south of Kentucky, this northern region is largely dominated by American Indian tribes including the Sioux, Miami, Delaware, Saks, Chippewa, and others. The Great Lakes themselves are riddled with errors including a number of apocryphal islands dating to Bellin's mid 18th century map of the territory. These include Isle Philippeaux, Isle Ponchartrain, and several additional unnamed islands in Lake Superior. The existence of these islands was not firmly disproved until the mid 19th century.