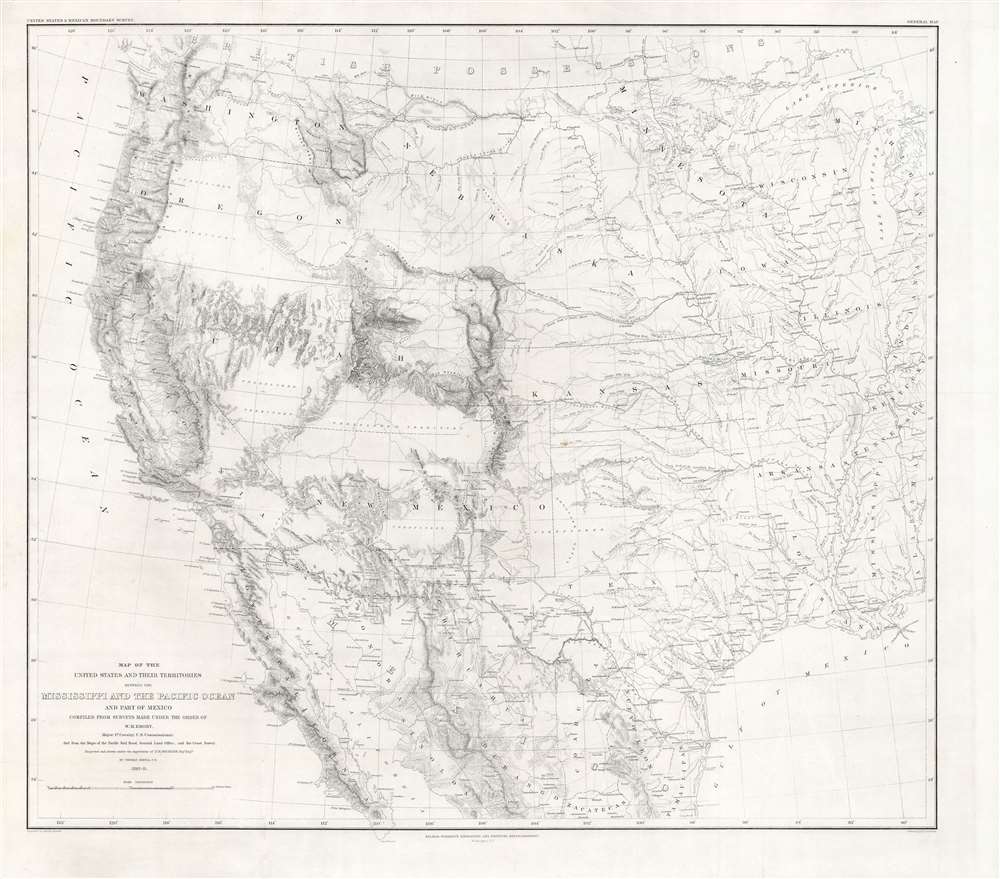 This is Emory and Michler's critically important 1857 map of the American West produced following the Treaty of Guadeloupe-Hidalgo and the Gadsden Purchase. The product of years of labor, delays, and frustrations, it appeared in Emory's monumental Report on the United States and Mexican Boundary Survey and was by far the most complete map of the American West at the time.

This remarkable map, often known simply as 'The General Map,' is the result of the compilation of years of survey work, including some by Emory that predated the Mexican-American War (1846 - 1848). In the wake of that war and the Treaty of Guadalupe Hidalgo, the U.S. set about surveying its new borders according to the terms of the treaty. However, this proved to be a daunting logistical challenge and was held up by subsequent negotiations. Political and diplomatic disputes caused the Survey to halt its work and limit its scope at various points, part of the reason for multiple large areas being noted as 'unexplored.'

Aside from the very large Nebraska, New Mexico, Utah, Oregon, and Washington Territories, many other placenames and borders would change in the following years. For example, Salt Lake City retains the use of the prefix 'Great' in its name, which would be dropped in 1866, while San Bernardino appears with the feminine form of its name as 'Bernardina' and Monterey, California with the unusual spelling 'Montery.' As was common in the Antebellum period, United States is used as a plural noun in the title.

The delays on the Survey were exasperating for Emory and the other cartographers and surveyors involved, but it did allow them to continuously update information and, in this case, include the recent Gadsen Purchase (the border as agreed in earlier agreements that were superseded by the Gadsen Purchase are shown with dotted lines). The final product, a massive multi-volume report published in 1857, is a landmark in the history of the American West, including not only maps and descriptions of terrain but also information on Native American cultures, botany, zoology, geology, paleontology, and more.

This map was drawn by Lt. Nathaniel Michler and Thomas Jekyll, under the supervision of William H. Emory, utilizing a variety of sources, including their own survey work. It was engraved and printed by Selmar Seibert in Washington, D.C. as part of the Report on the United States and Mexican Boundary Survey. It is similar to but distinct from the earlier, less detailed, and larger 'Map of the territory of the United States from the Mississippi to the Pacific Ocean: ordered by the Hon. Jeff'n Davis, Secretary of War' that was also included in the report and attributed to G. K. Warren, as well as other earlier maps produced under Emory's leadership. Often dated to 1858, this map appears in the catalogs of about 20 institutions, while the entire Report (not necessarily including this map) is more widespread.

Very good. A small hole in the Oklahoma panhandle. Some creasing and wear along fold lines in margin.