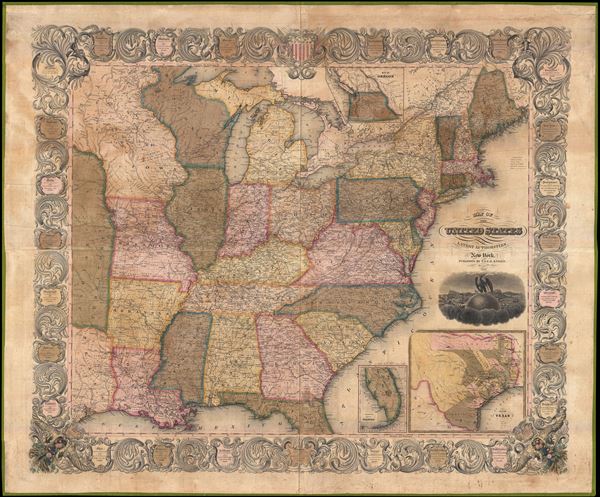 An extremely scarce manifest-destiny era wall map of the United States with an inset of the newly admitted Texas.

A scarce 1846 wall map of the United States by Horace Thayer and Edward Ensign. This remarkable map covers the United Stated from Texas and the Upper Mississippi Valley eastward to the Atlantic and from Lake Superior to the Gulf of Mexico. Insets detail Oregon Territory and the newly admitted states of Florida and Texas. The map is surrounded by a decorative acanthus border framing miniature cartouches offering population and other details relative to each admitted state. The map is copyrighted to 1845, though we have not been able to identify any examples from that year. The date under the title cartouche is 1846, suggesting this to be the second edition, updated to reflect the December 1845 admittance of Texas and Florida into the Union.

The Texas inset in the lower left corner is notable for both its size and detail. The map presents Texas in an exceptionally ephemeral form reflecting the early Republic of Texas political geography. Here Texas extends westward off the map to include most of modern day New Mexico. Though not presented here, Texas at this time would also have included a long northern panhandle extending well into modern day Wyoming. The map offers an excellent county breakdown in eastern Texas with Austin, Galveston, San Antonio, and Houston, as well as a number of other early Texas cities, identified. The map sites the population of Texas around this time at a slight 140,000. The choice to not include the northern and western portions of Texas is suggestive of the Thomas Benton border reconfiguration plan which, though not adopted, would be formally presented to congress in 1850.

The present map is an exceptionally beautiful example and the only we are aware of to bear the 1846 imprint. The presumed third edition, which would follow in 1847, is more common. Published from offices at 36 Ann Street, New York City.

Very good condition. Professionally restored and stabilized. Attended by buy not attached to original wooden ferules.
Looking for a high-resolution scan of this?