1979 Soviet Geodesy and Cartography Map of the United States 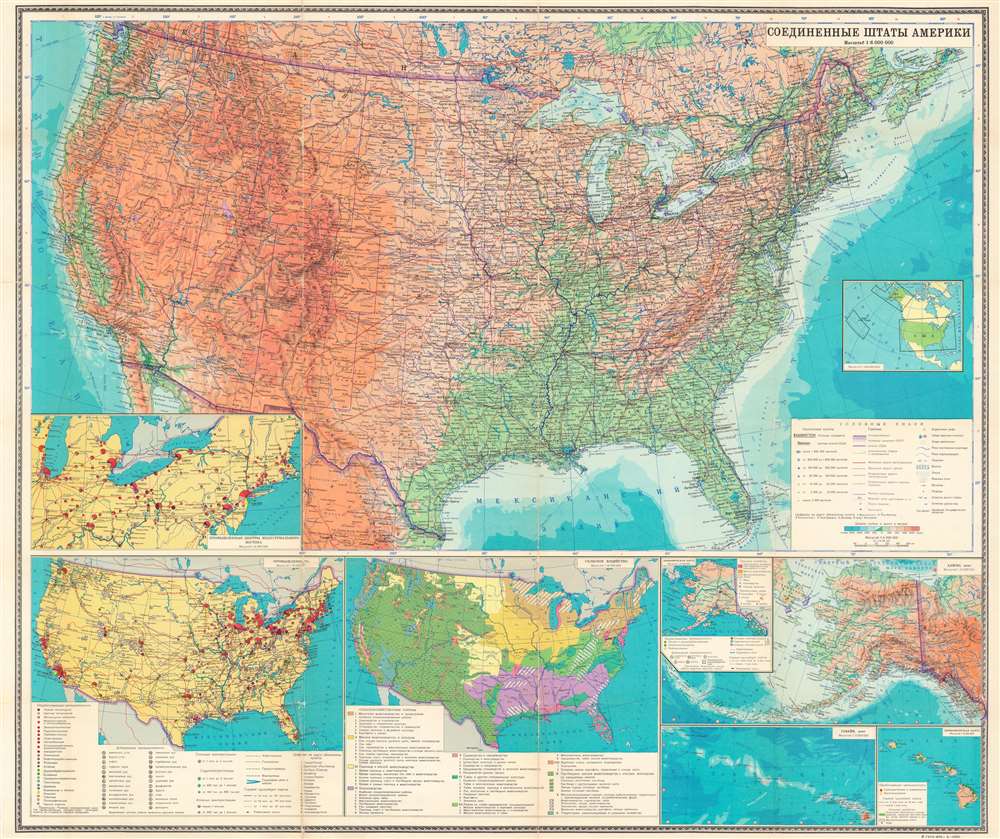 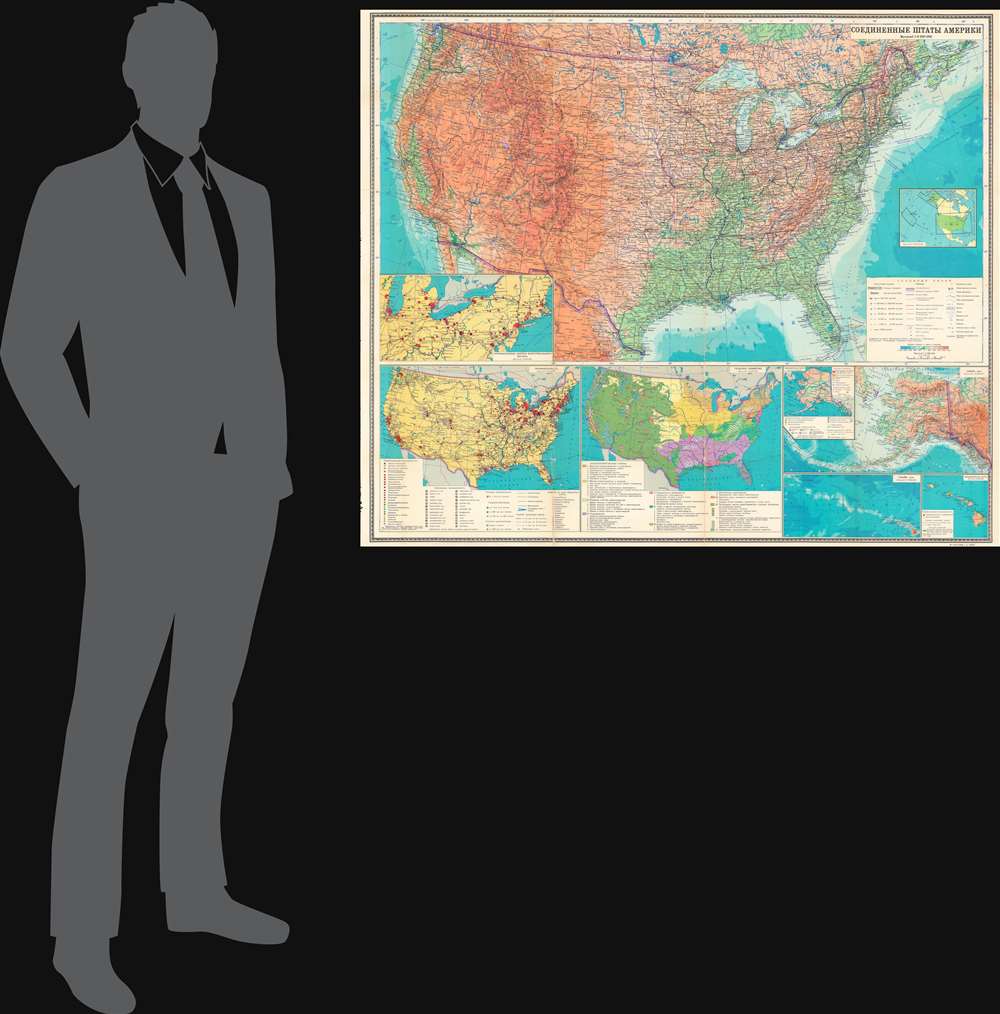 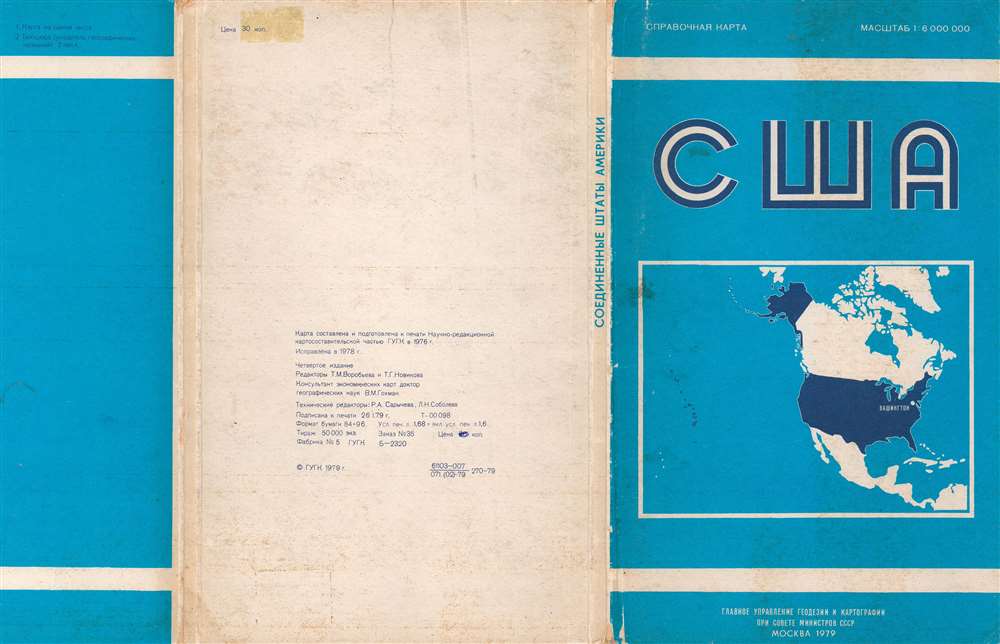 1979 Soviet Geodesy and Cartography Map of the United States

This is a 1979 Cold War Era Russian-language map of the United States of America published by the Main Administration of Geodesy and Cartography of the Soviet Union (known by the anglicized form of its Russian initials GUGK). Assisting GUGK with this map was the geographer Veniamin Maksovich Gokhman, one of the most knowledgeable experts on American economic geography in the U.S.S.R. The map and its insets highlight the industrial and economic geography of the U.S., valuable information for the Soviets about their Cold War adversaries.

A great deal of detailed information on the geography and economy of the U.S. are presented here. The main map is shaded to show elevation (and depth of waters) and denotes settlements of various sizes, administrative borders, infrastructure (roads, railroads, ports, etc.) and geographic features. A small inset map shows the continental U.S. along with Alaska and Hawaii at a scale of 1: 100000000.

Seven additional inset maps sit below the main map. Moving clockwise they are: a map of Alaska in the same style as the main map; an economic map of Alaska showing natural resources and infrastructure such as power plants and oil pipelines; an economic map of Hawaii; a map of Hawaii in the same style as the main map; a map of American agriculture, color coded by industry (dairy, beef, corn, wheat, cotton, and so on); a map of American industry (ferrous metallurgy, non-ferrous metallurgy, chemicals, textiles, and so on), also color coded, noting mines with the symbols of chemical elements in the periodic table, and including electrical generation, pipelines, the annual cargo turnover of ports, and numbers associated with various places on the map (presumably because there was no space to write the name); and, finally, a map of industrial centers of the eastern U.S., using symbols and color coding from the industrial map below.

This map was produced during a period of relatively low tensions between the U.S. and Soviet Union following détente and the first treaties on arms limitations. But it was published just as tensions between the two superpowers was heating up again. This 'new Cold War' was spurred by continued proxy wars in the Third World, unexpected events such as the Iranian Revolution, the Soviet intervention in Afghanistan in December 1979, a return to an intense nuclear arms race, and the election of Ronald Reagan. Direct bilateral tensions reached a point not seen since the Cuban Missile Crisis and the threat of nuclear war increased. The situation dramatically improved with the elevation of Mikhail Gorbachev as Secretary-General of the Communist Party of the Soviet Union, when relations moved back towards détente and arms limitations.

This map was compiled and prepared for printing by the Scientific and Editorial Mapping Department (Научно-редакционной картосоставительской частью) of the Main Administration of Geodesy and Cartography of the Soviet Union (Главное управление геодезии и картографии, or GUGK). It was edited by T.M. Vorobeva and T.G. Novikova, with R.A. Sarychev and L.N. Sobolev serving as technical editors. Dr. V.M. Gokhman served as a consultant on the map, as he did with other economic maps for GUGK. This is the fourth edition of the map (originally published in 1976 and amended in 1978), 'signed for publication' on January 29, 1979. It is held by Brigham Young University, the University of Chicago, the Library of Congress, and the British Library.

Main Administration of Geodesy and Cartography, U.S.S.R. (Главное управление геодезии и картографии, or GUGK; 1939 – 1991) traced its roots to the early years of the Soviet Union, when the Higher Geodetic Administration (Высшее геодезическое управление, VGU) was created to centralize and direct topographic, geodetic, and cartographic work in the new state. However, as a branch office of the Supreme Council of National Economy with little authority and a small staff, it was not able to achieve these lofty goals. In 1925, VGU was moved to the State Planning Commission (Gosplan) and underwent several organizational changes, but problems of coordination persisted. In 1935, the office was placed under the People's Commissariat for Internal Affairs (NKVD) and in 1939 renamed the Main Administration of Geodesy and Cartography (GUGK) under the USSR Council of Ministers, the form it would take until the collapse of the Soviet Union in 1991. With its structure and authority settled, GUGK went on to produce many thousands of maps of the Soviet Union, other territories, and the world in several languages over the course of its existence. The successor to GUGK was the Federal Agency for Geodesy and Cartography (Roskartografiya), which existed from 1991 until 2009, when it was replaced with the Federal Service for State Registration, Cadastre and Cartography (Rosreestr). Learn More...


Veniamin Maksovich Gokhman (Вениами́н Ма́ксович Го́хман; 1918 - 1986) was a prominent Soviet geographer and expert on the United States. Although initially trained as a chemist, Gokhman turned his attention to geography and wrote a doctoral dissertation on the geographic distribution of American industry and its role in the Second World War. In the mid-1950s, he began his career as a professor at Tomsk University and then at the Moscow State Institute of International Relations. He was also deeply involved with the Institute of Geography of the USSR Academy of Sciences. Gokhman was a pioneer in the fields of mathematical geography and theoretical geography, though he also emphasized social and cultural aspects of geography. Although he never visited the U.S., Gokhman was a key figure in American Studies in the Soviet Union, a leading expert on American geography, and a translator of works of Western geographers into Russian. Learn More...