1783 Russell Map of the United States 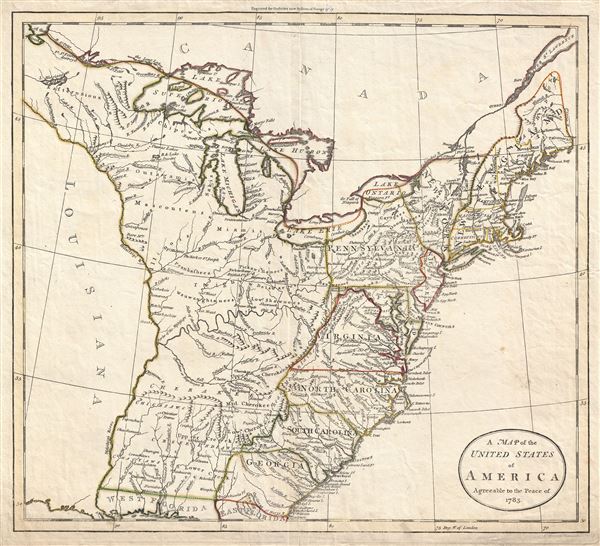 1783 Russell Map of the United States

The United States just after the American Revolutionary War.

An unusual c. 1783 John Russell map of the United States issued shortly after the American Revolutionary War. The map depicts the United States according to the 1783 Treaty of Paris that formally ended the War. These borders extended from the middle of the Great Lakes (sans Michigan) south to West Florida and from the Mississippi to the Atlantic.

Recognizable states are confined to those lands to the east of the Appalachian Mountains; however most are presented in an unusual and inexact early configuration. Vermont is shown as part of New York, usual at this juncture, and Pennsylvania controls most of western New York from Lake Ontario to the Pennsylvania-Maryland border. Florida at this time was fully under Spanish control having been ceded to Spain by the British as a reward for staying neutral throughout the conflict. Louisiana, following Franco-Hispanic treaties dating to 1762 is also, at this point, a Spanish possession.

In northern Maine Russell adds the additional territory of Sagahadok. Sagahadok or Sagahadoc, is the legacy of an early 17th British effort to colonize North America. Technically Sagahadoc refers to the territory between the Kennebec River and Nova Scotia. In the few mid-18th century maps that actually show Sagahadoc, such as the present example, the region is depicted as a territory attached to the Massachusetts Colony. However, by this time it has been fully separated from Massachusetts and is drawn as a separate colony. The appearance of Sagahadoc may be related to a post-Revolutionary War British attempt to add this part of northern Maine to their Nova Scotia Colony, referencing an early claim to the territory dating from its original failed 1620 colonization attempt. Similarly, Vermont, through clearly identified in its present location, is here added to British controlled Canada.

The United States thus seen here lays claim to a vast stretch of unnamed Indian lands between the Mississippi River and the Appalachian Mountains and from the Great Lakes to West Florida. Throughout these lands various American Indian groups and villages are identified as well as river systems, trading posts, and former British fortifications. Curiously many of the states and territories that were created during the war are not present - including Kentucky and Vermont. Many other later maps did not include these states, but few went so far as to terminate the western borders of the former colonies at the Appalachian Mountains. We can think of only a few reasons why this may have occurred. One is that the cartographer was following earlier French issued colonial era maps dating to the French and Indian War, in which the French used similar borders to increase presumed French territory in Louisiana vs. British territories along the eastern seaboard. Perhaps Guthrie is in here advocating for certain European interests which may or may not have included sustained British or French interest in these lands.

Four fictive islands appear just south of the U.S.-Canada border in Lake Superior: Philippeux, Pontchartrain, Maurepas, and St. Anne. These islands were invented half a century earlier by the French historian and traveler Charlevoix, then subsequently immortalized by the cartographer Jacques-Nicholas Bellin. The islands were intended to honor Charlevoix' s personal patron, the Count of Maurepas, Jean-Frederic Phelypeaux. The largest of the three islands, Philippeaux, is named directly after the count. The second largest island, Pontchartrain, refers to Phelypeaux's family estate. The third island, which may in fact be a mismapping of the factual State Islands, is named after the count's seat, Maurepas. The fourth and smallest of the islands, St. Anne, references the count's patron saint. Charlevoix described the islands as being rich in minerals leading numerous explorers to search for them in vain. Bellin dutifully introduced the four islands to his map, and such was his influence that they were subsequently copied by most subsequent cartographers, including John Mitchell in his seminal 1755 wall map of North America. The highly regarded Mitchell map was used in negotiating the 1783 Treaty of Paris that formally concluded the American Revolutionary War. Therein, the apocryphal Philippeaux was assigned as a marker for the new United States - British America border, as seen here, thus setting the stage for later political strife.

This map was drawn by John Russell and engraved in Tottenham (north London) by William Darton for the 1785 edition of Guthrie's New System of Geography. Russell's name does not appear on the map. Stylistically this map is far ahead of its time presaging the early 19th century work of Cary, Pinkerton, and Thomson.


William Darton (February 2, 1781 - July 28, 1854) was an English publisher and engraver active in Tottenham London during the early part of the 19th century. Darton was the eldest son of William Darton Sr., himself a printer and publisher who co-owned the firm of Harvey and Darton. Darton, a Quaker, was educated at the Friends School in Clerkenwell, London and the Ackworth School in Yorkshire. Afterwards Darton apprenticed to his father where he mastered the part of printing and engraving. Around 1804 Darton opened his own shop, the "Repertory of Genius", specializing in maps, prints, children's books, educational publications, and other "works of merit" at 50 Holborn Hill, London. Cartographically Darton's most significant contribution is his 1823 publication, along with engraver W. R Gardner, of the first composite comparative mountains and rivers chart. Darton also published various maps for the 1802 Atlas to Walker's Geography and his own 1813 Union Atlas. Darton retired in 1851 leaving his business to his son, John Maw Darton, who partnered with Samuel Clark and published as "Darton and Clark". Learn More...

Very good condition. Original centerfold exhibits some verso reinforcement. Else clean.
Looking for a high-resolution scan of this?