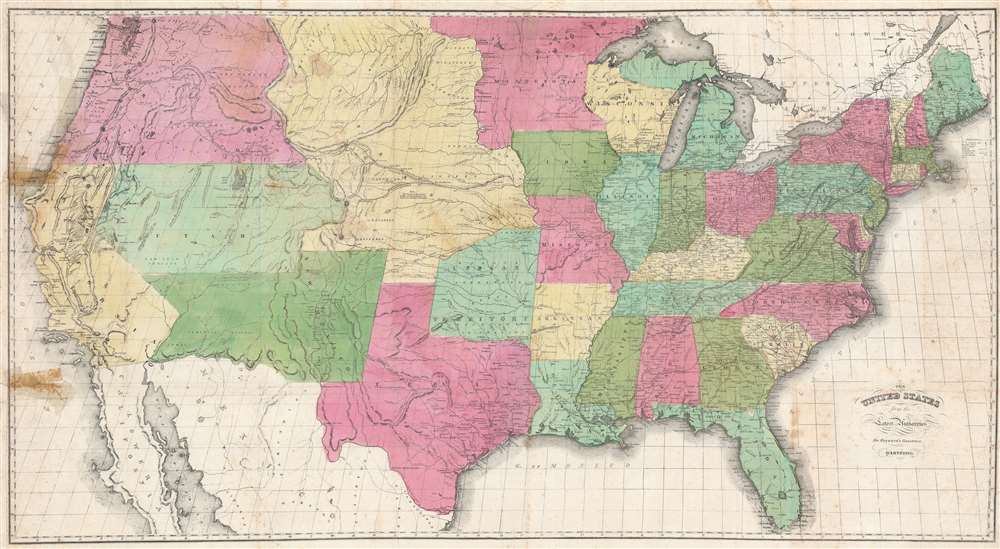 Scarce large map showing the United States on the eve of the Gadsden Purchase.
$1,850.00

Cartographically Hayward's illustrates the brief period between the end of hostilities in the Mexican-American War and the Gadsden Purchase. The southern border of New Mexico (and modern day Arizona), this terminates at the Gila River. Though primary intended for the construction of a transcontinental railroad along a deep southern route, the Gadsden Purchase also aimed to reconcile outstanding border issues between the US and Mexico following the Treaty of Guadalupe Hidalgo, which ended the Mexican-American War of 1846–48. Apparently these issues revolved around an error in the map utilized in the Treaty (an 1847 edition of John Disturnell's Mapa de los Estados Unidos de Mejico) which perpetuated an error initially made by H.S. Tanner in the second edition of his 1826 Map of Mexico. As a consequence, a critical region lying south of the Gila River, which was intended to be part of the United States, was still a part of Mexico.

Other elements of interest including this map's presentation of an ephemeral border configuration in the American West. While California is much as it appears today, Utah, New Mexico, and Oregon stretch from the California Border to the Rocky Mountains. Nebraska sprawls in all its territorial glory from Texas to the Canadian Border and from the Rocky Mountains to the Mississippi River. The Indian Territory, modern day Oklahoma, exhibits an unusual configuration lacking its Panhandle (ceded 7 years later) but controlling much of modern day Kansas.

The routes of numerous explorers as well as various emigrant routes wind across the continent. These include Fremont's Route, the Sante Fe Route, the Oregon Trail (with distances from Westport Landing), and the Old Spanish Mission Road, among others. Throughout there are interesting annotations including comments relating to overland travel, Mormon settlements in Utah, and the 'supposed residents of the Aztecs in the 12th century.'

Wheat notes that the map draws somewhat on Colton's map issued for Horn's 1852 Guide. We was particularly curious about the identification of 'Brophy's Cutoff' and 'Brophy's Rancho' in Yuba County, California. In 1850, John Rose started a ranch on seventy acres where he raised a crop of barley that year. Later in the same year he sold the northern part of his lands to John Brophy who opened a hotel which must have prospered for in 1853, just three years later and as this map was going to press, Brophy returned east to relocate his family.

John Hayward (fl. c. 1840 - 1860) was a publisher of Gazetteers based in Hartford Connecticut. His work included by national and state Gazetteers, though most of his work focused on New England. Little is known of Hayward's life, but he seems to have been successful and may have attended Yale. Upon his death he was survived by his wife. Learn More...

Hayward, J., A Gazetteer of the united States of America, (Hartford: Case, Tiffany and Company) 1853.

Good. Some damage to left side resulting from older tape repair. Some wear and creasing on original fold lines, especially at fold intersections. Backed on archival tissue for stability.