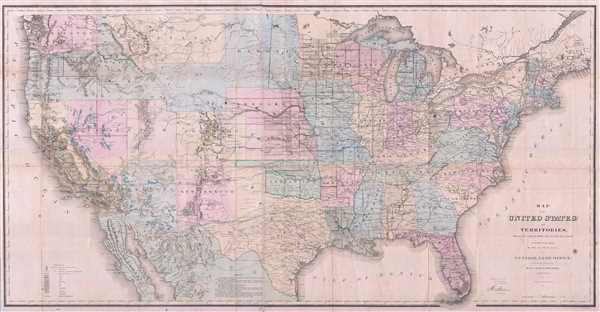 This is an extremely interesting 1867 U.S. Land Office map of United States. It covers the entire country on a rectangular projection, illustrating the extant of the land surveys as it worked its way westward. This map notes the progress of the Transcontinental Railroad, which was at the time still under construction. This map was issued just three years after the Montana Territory was created and a year prior to the creation of the Wyoming Territory. The General Land Office, during this period of westward expansion, also issued similar maps in various languages and distributed them throughout the world, in order to promote investment and immigration.

This large format map pays particular attention to the western states, with updated surveys and information regarding railroads, land districts, mineral deposits, location of U.S. Surveyor and Land Offices, land grants, etc., giving an up-to-date picture of the progress and development on the lands west of the Mississippi.

In this map the surveyed areas are subdivide by tiny squares. It also illustrates mineral deposits throughout the country with the rich gold and silver deposits in California, Colorado, Arizona, Nevada, and Montana clearly noted. The map also notes some topographical features, American Indian territories, the locations of fortifications, major and minor cities, transcontinental and local railway lines, and the routes taken by notable military expeditions and explorers.

This map was prepared to accompany the Report of the Commissioner of General Land Office for the Year 1868.