1846 Mitchell Map of the United States 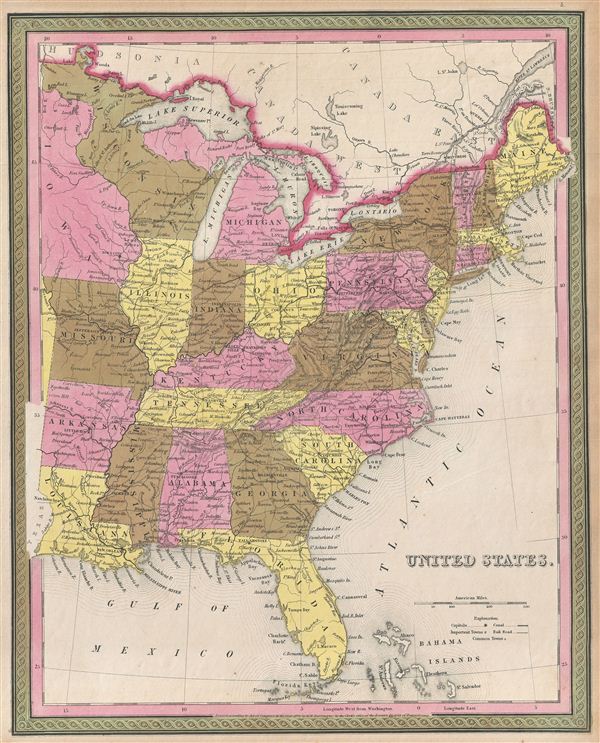 1846 Mitchell Map of the United States

A fine example of the 1846 first edition of Mitchell's map of the United States. This map covers the United States east of the Mississippi as well as the Trans-Mississippi territories of Louisiana, Arkansas, Missouri, and Iowa. The whole is engraved and colored in Mitchell's distinctive style with green border work and vivid pastels. Political and topographical features are noted and color coded with elevation rendered by hachure.

This ephemeral map details United States during a period of rapid development and westward expansion. Throughout the 1840s emigration and settlement to the west of the Mississippi led to a transformation of the national map. The present example focuses on the eastern portion of the country in the early days of the Mexican-American War. In the year of this map's publication, Texas joined the Union leading to U.S. invasion of Mexican California and the subsequent events of the Mexican-American War.

Mitchell derived this map from an earlier map of Michigan by H. S. Tanner, whose plates he acquired in 1846. engraved by H. N. Burroughs for publication as plate no. 5 in the 1846 first edition of S. A. Mitchell's New Universal Atlas.


H. N. Burroughs (fl. c. 1835 - c. 1860) was an engraver based in Pennsylvania and active in the early 19th century. Burroughs is an extremely elusive figure who work appears almost exclusively in conjunction with that of Henry Schenk Tanner and Samuel Augustus Mitchell (the elder). His name appears on the 1846 copyrights of many of Mitchell's earliest and most important atlas and pocket maps. Following 1846, Burroughs seems to have retired from cartography or changed careers. There are records of one H. N. Burroughs who owned a Pennsylvania coal mining company, and another who was president of a New York Bank. Whether or not these are the same individual is unknown.

Very good condition. Blank on verso. Even overall age toning.
Looking for a high-resolution scan of this?