1864 Mitchell Map of the United States 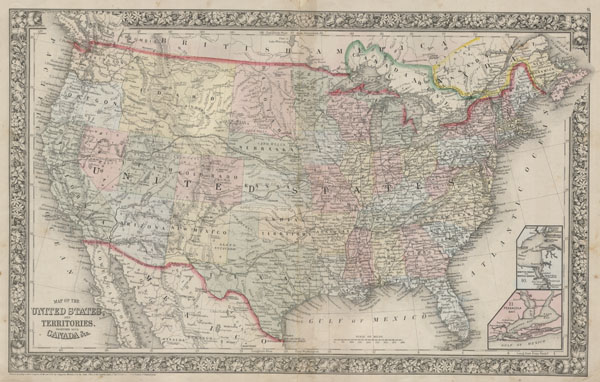 1864 Mitchell Map of the United States

A fine example of Mitchell's 1864 map of the United States. Depicts the entirety of the continental United States along with parts of Canada and Mexico. Depicts the country in considerable detail with notations regarding railroads, mail routes (including the famed Pony Express Routes), emigrant routes westward, topographical, and political details. Represents the 1864 state of the map in which the Western states are presented in an early ephemeral configuration. Idaho embraces all of modern day Montana, and Wyoming. Arizona contains what is today the southern extension of Nevada, including Las Vegas, which is noted. Two insets in the lower right quadrant feature 'Hampton Roads and Norfolk Harbo'r as well as' Pensacola Bay.' One of the most attractive American atlas maps of the United States to appear in the mid 19th century. Features the floral border typical of Mitchell maps from the 1860-65 period. Prepared by S. A. Mitchell for inclusion as map nos. 9, 10 and 11 in the 1864 issue of Mitchell's New General Atlas. Dated and copyrighted, 'Entered according to Act of Congress in the Year 1860 by S. A. Mitchell Jr. in the Clerk's Office of the District Court of the U.S. for the Eastern District of Pennsylvania.'

New York Public Library, Map Division, 1510796.
Looking for a high-resolution scan of this?