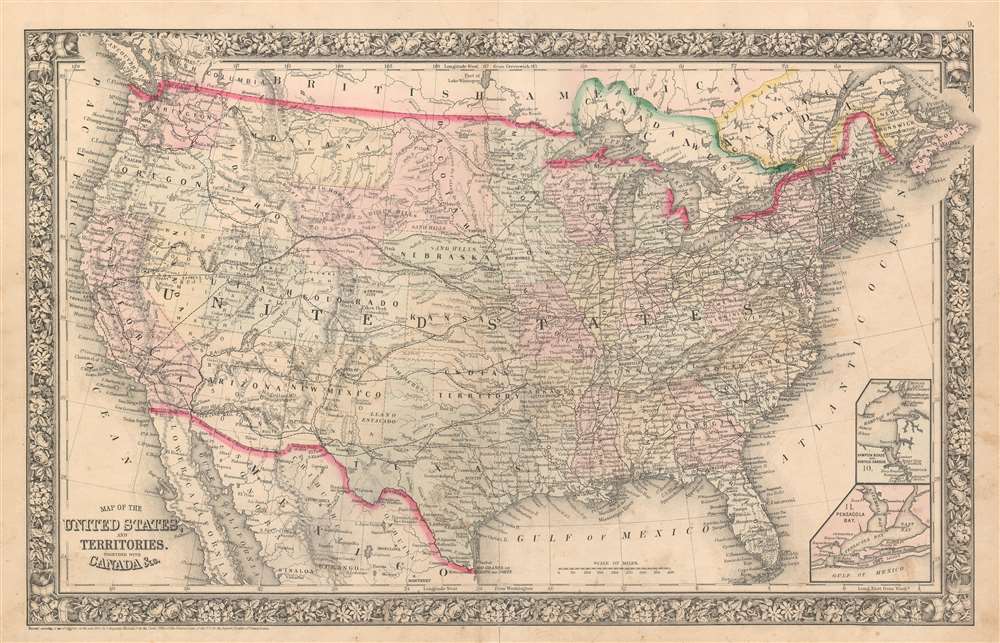 Illustrates an approximation of Wyoming identifying it simply as 'Attached to Dacotah'.
$450.00

This is the first of two states of Samuel Augustus Mitchell Jr.'s 1865 map of the United States. Depicting the entire continental United States and including parts of Canada and Mexico, all the states and territories are identified, and myriad cities and towns are labeled from coast to coast. Rivers and lakes are also labeled. Two inset maps situated in the lower right corner illustrate Hampton Roads and Pensacola Bay.

This map is important due to its inclusion of a territory that roughly approximates the Wyoming Territory. A bill was introduced in Congress in January 1865 to create a provisional Wyoming Territory (see Geographicus: unitedstateswyoming-mitchell-1865), but that effort failed. Here Mitchell includes for the first time this proposed territory, although it is unnamed and referred to simply as 'Attached to Dacotah'. This territory's eastern border aligns with the 104th Parallel, which was the traditional border of the Dacotah region. On the subsequent state of Mitchell's 1865 map, these borders would be changed.

This map was created and published by Samuel Augustus Jr. in the 1865 edition of his New General Atlas.

Mitchell, S. A., Mitchell's New General Atlas Containing Maps of the Various Countries of the World, Plans of Cities, Etc., embraced in Forty-Seven Quarto Maps, Forming a series of Seventy-Six Maps and Plans, together with Valuable Statistical Tables (1865 edition).     Mitchell's New General Atlas was published by Samuel Augustus Mitchell, Jr., the son of the prolific cartographer Samuel Augustus Mitchell. Many of the plates are derived from the his father's Mitchell's Universal Atlas, but not directly. The Mitchell's Universal Atlas was initially sold to Thomas, Cowperthwait, and Company in 1849, and again to Charles Deliver in 1856. It was Deliver who introduced the new vibrant color scheme, abandoning the older Mitchell's Universal Atlas green borders and themes for bright reds, blues, and yellows. Samuel Augustus Mitchell, Jr. acquired the Deliver plates in 1859. He added his own floral motif border, but doubled down on the vibrant color scheme, thus introducing to the American public the most vividly colored American atlas of the 19th century. In 1860, he published the first edition of his New General Atlas and, despite a slump in sales during the American Civil War, attained a level of success to rival his father. Mitchell would continue to publish the New General Atlas until 1887, when the firm formally closed.

Very good. Even overall toning. Light wear along original centerfold. Blank on verso.
Looking for a high-resolution scan of this?