1867 Mitchell Map of the United States 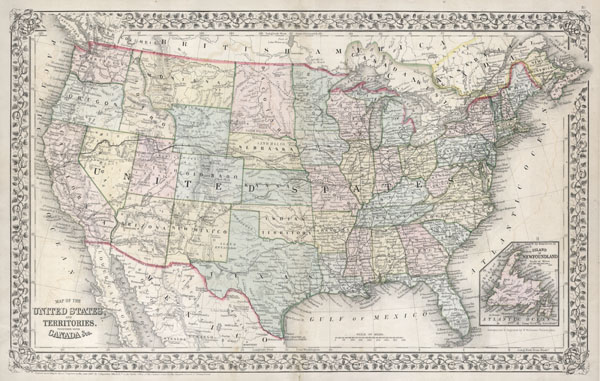 1867 Mitchell Map of the United States

A fine example of Mitchell's 1867 map of the United States. Depicts the entirety of the continental United States along with parts of Canada and Mexico. Shows the country in considerable detail with notations regarding railroads, mail routes (including the famed Pony Express Route), emigrant routes westward, topographical, and political details. Represents the 1867 state of the map in which the western states appear much as they do today with but two notable exceptions. Wyoming retains its western panhandle, which was later resolved into Montana, and Dacotah (Dacota) is one large state. The earlier insets of Norfolk Harbor and Hampton Roads have been replaced with a single inset map of Newfoundland. Mitchell would go on to update this map with a new copyright in 1870, when he corrects for Wyoming, and in 1872. One of the most attractive American atlas maps of the United States to appear in the mid 19th century. Features the floral border typical of Mitchell maps from the 1866-87 period. Prepared by W. Williams for inclusion as map nos. 10 and 11 in the 1867 issue of Mitchell's New General Atlas. Dated and copyrighted, 'Entered according to Act of Congress in the Year 1867 by S. A. Mitchell Jr. in the Clerk's Office of the District Court of the U.S. for the Eastern District of Pennsylvania.'