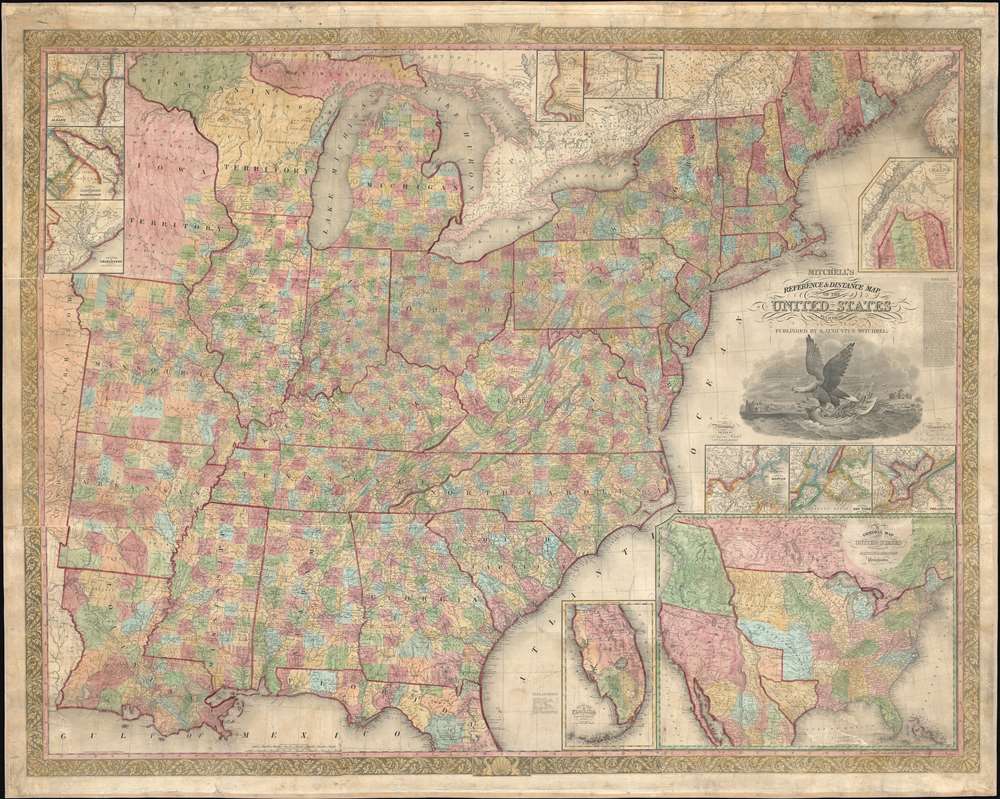 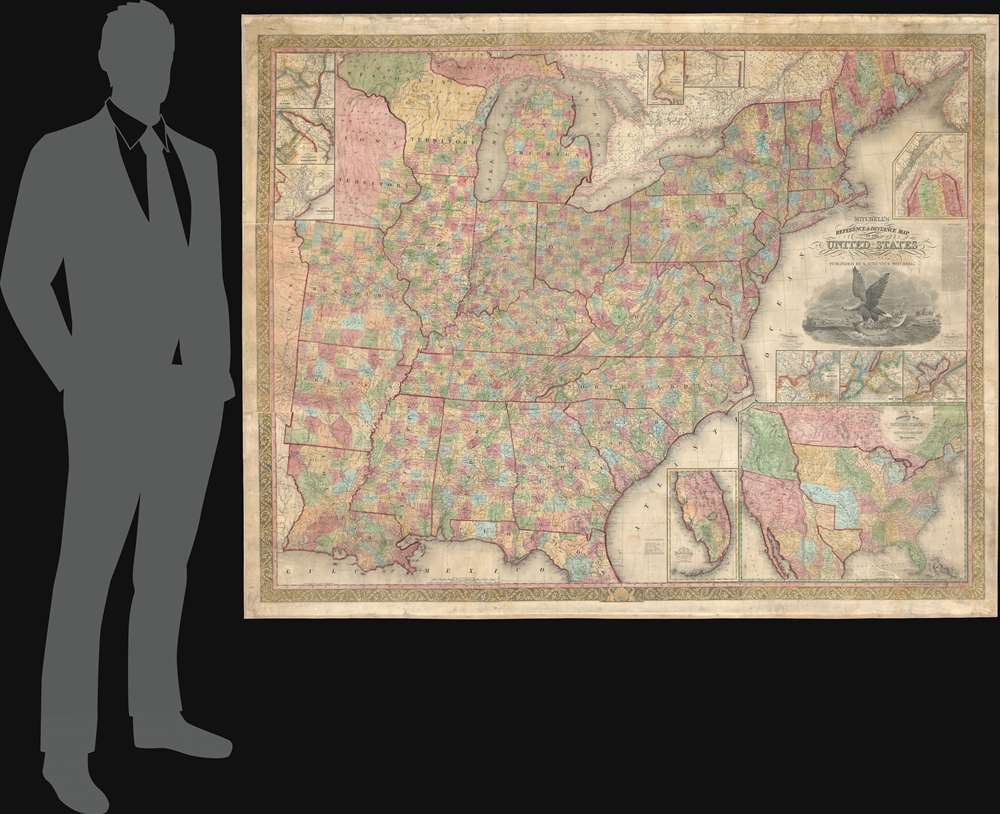 The only edition of Mitchell's Wall Map to include the Republic of Texas!

This is an exceptionally rare 1844 edition of S. A. Mitchell and J. H. Young's important large-scale wall map of the United States, and the only edition to include both the short-lived Republic of Texas and the even more ephemeral Florida Leigh Read County. Like most maps of the United States predating the Mexican-American War (1846 - 1847), this map covers from the Sabine River to the Atlantic, and from the Great Lakes to Florida. There are multiple insets, two of which are of particular note. The largest is a map of the United States with a prominent Republic of Texas exhibiting the pre-1846 borders. To the left a large inset Florida includes Leigh Read County - a ephemeral county division that never formally materialized (see below). The map also illustrates the 54°40' dispute over U.S. claims in modern-day British Columbia.

The borders of the Republic of Texas were in dispute from the earliest days of the Texan Revolution. The Republic-claimed borders followed the Treaties of Velasco between the newly created Texas Republic and Mexican leader, Antonio López de Santa Anna. The treaties established an eastern boundary following the 1819 Adams-Onís Treaty between the United States and Spain, which established the Sabine River as the eastern boundary of Spanish Texas and western boundary of the Missouri Territory. The Republic's southern and western boundary with Mexico was more nuanced. Texas claimed the Rio Grande del Norte as its western and southernmost border, while Mexico argued for a boundary much further east at the Nueces River. When Texas was annexed into the United States, the agreement followed the Republic claimed boundary, thus absorbing Mexican claimed territory as far west as Santa Fe. This escalated already existing tensions between the United States, the former Republic of Texas, and Mexico, ultimately triggering the Mexican-American War (1846 -1848).

Leigh Read was born in Tennessee, served as a militia general during the Second Seminole War (1835 - 1842), and was a delegate to the Convention of 1837 lobbying for Florida statehood. Read and fellow Florida Democrats passed a constitutional amendment to prohibit the sale of bonds by the territorial government. The bill garnered Read a host of enemies who would have profited from the bond sales, among them former friend, Augustus Alston. In retribution, Alston challenged Read to a duel, a method frequently used by Florida Whigs to dominate territorial politics. Read initially refused the challenge, but, after being ridiculed as a coward, finally agreed. As the challenged, Read selected the weapon, Yager Rifles, and a site in Georgia (to avoid Florida's dueling ban). Alston, a confident and experienced dueler, told his wife to have a sumptuous dinner ready on his return. On a chilly morning in December 1839, Alston and Read faced off. The dueling protocol called for each to take four steps, turn, and fire. As Read and Alston separated, Alston stumbled and misfired. Read, on the other hand, calmly took aim at Alston's chest and fired, killing him instantly. Alston's sister, it is said, dug the bloody slug out of Alston's chest and sent it to his brother Willis Alston, then living in Texas. Bent on vengeance, Willis Alston travelled to Florida in January 1840 with a new bullet made from the old slug. He found Read at the Brown Hotel celebrating his election as the presiding officer of the territorial legislature. Alston shot Read in the shoulder, but Read returned fire, hitting Alston in the hand. Alston then stabbed Read with a Bowie knife and fled. While Read recovered from this attack, Alston was undeterred, attempting a second attack, firing unsuccessfully into Read's carriage. Alston made a third attempt on Read's life on April 26, 1841. Read was crossing a Tallahassee Street when Alston shot him in the back with a shotgun, followed by a second blast to the chest, killing him. Alston was arrested but allowed to post bond after which he fled to Texas. Shortly thereafter, the hotheaded Alston quarreled with and murdered a popular Texas doctor. A mob of as many as thirty Texans extracted frontier justice, dragged Alston out of town and 'executed him, each man taking a shot'.

Following the transcontinental crossing of North America by the British Northwest Company sponsored explorer Alexander MacKenzie (1792 – 1793), and the American expedition of Lewis and Clark up the Missouri to the mouth of the Columbia River (1804 – 1806), it became apparent that control of the fur and resource rich Pacific Northwest would bring great wealth and power to whoever could assert sovereignty. The American tycoon John Jacob Astor, with the permission of President Thomas Jefferson, was the first to attempt a permanent trading colony in the region, founding Astoria on the Columbia River in 1811. This quickly led to a confrontation with the established British-Canadian Northwest Company over this valuable territory. Americans in the 1820s through the 1840s argued that most of the Pacific Northwest should be part of the United States as a legacy of the 1803 Louisiana Purchase. England, on the other hand, argued for residual claims to the region derived from the MacKenzie Expedition and its fur trading empires: The Northwest Company and the Hudson Bay Company. The Oregon Dispute, as it came to be known, became an important geopolitical issue between the British Empire and the United States, especially after the War of 1812. Americans adopted the slogan '54-40 or Fight!' until the Oregon Question was finally resolved roughly along the current border by the 1846 Oregon Treaty.

Most examples of this map are copyrighted to 1833. It was most likely first released by S. A. Mitchel is 1834 and was subsequently regularly updated with editions in, at least, 1841 (Republic of Texas added), 1844 (as here w/ Republic of Texas), 1845 (with Texas' stovepipe configuration) 1846 (U.S. map replaced by Mitchell's pocket map of Texas, Oregon and Upper California), and 1849 (post Guadeloupe-Hidalgo borders). The map was engraved by J. H. Young, F. Dankworth, E. Yeager and E. F. Woodward. The cartouche was engraved and designed by W. Mason. While examples of this map do come to market from time to time, the 1844 edition is exceedingly rare, absent from most cartobibliographies, and with only one other sales record in the last 25 years. This is the only one of two editions to include the Republic of Texas borders, so while the map itself is obtainable in other editions, the present edition is a rare find.

Very good. Full professional restoration including fresh linen backing. Even overall toning. Can be reattached to original rollers upon request.