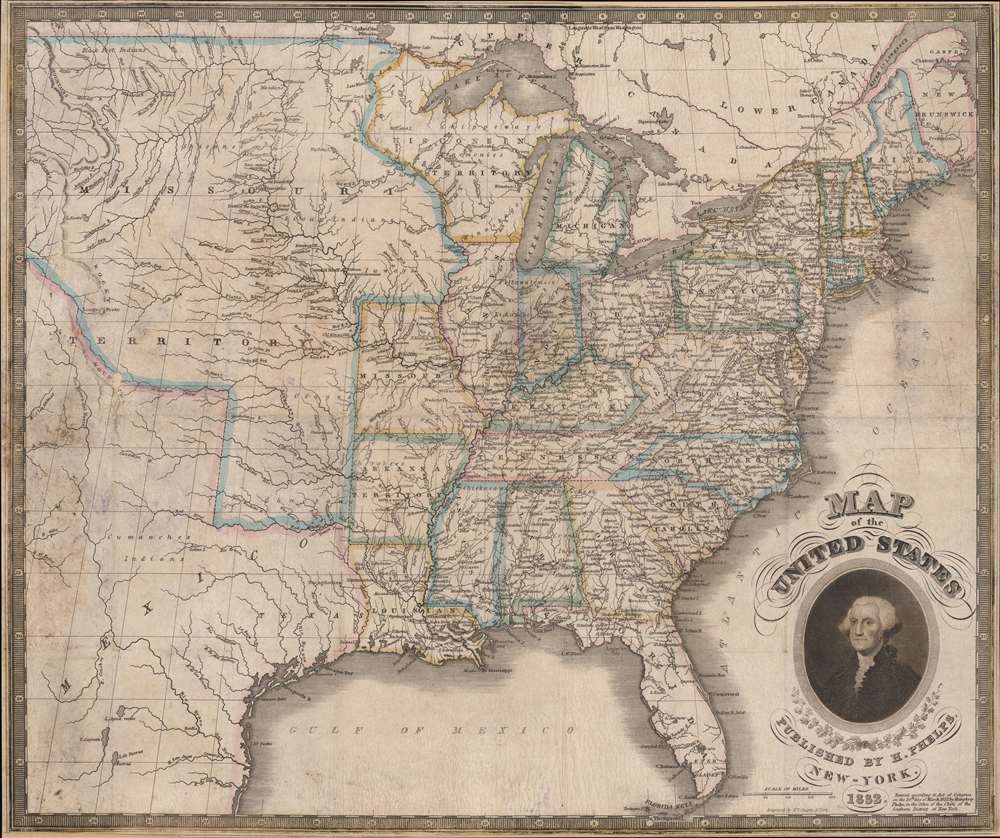 Identifies the Ouisconsin (Wisconsin) Territory before its official creation.
$1,250.00

This is an 1832 Humphrey Phelps map of the United States with a dramatic portrait of George Washington. Coverage extends from the Atlantic Ocean to the Rocky Mountains.

While the development and settlement of the eastern states is evident, this piece also presents important information concerning westward expansion. The Missouri Territory dominates the country's western extremes, with American Indian villages, frontier forts, and rivers being the only labeled locations west of Missouri and the Arkansas Territory. American Indian tribes are identified with larger type, suggesting the territory where each tribe lived. Missouri, the easternmost state, gained statehood in 1821 and the Arkansas Territory wouldn't become a state for another three years.

Intriguingly, Phelps includes the Wisconsin Territory (spelled Ouisconsin - a French transliteration of the American Indian word), which encompasses the modern-day state of Wisconsin and parts of Michigan and Minnesota. All this territory (which is east of the Mississippi River) had once been a part of the Michigan Territory. However, the Wisconsin Territory was not officially created by Congress until 1836, meaning this map predates its official creation by four years.

This map was engraved by William Chapin and published by Humphrey Phelps in 1832. This map is well represented in institutional collections but is scarce on the private market.


William Chapin (1802 - 1888) was a prominent New York and Philadelphia based engraver active in the early part of the 19th century. Although we know little of Chapin's early years, he seems to have been an apprenticed from 1817, at the age of 15, to John Vallance in the Philadelphia firm Tanner, Vallance, Kearny & Company. This firm, which is responsible for Tanner's early maps and atlases, had a substantial cartographic corpus. There are records to indicate that Chapin purchased his freedom from Vallance for 125 USD in 1822. In time, he established a significant engraving business under his own name, and with a heavy focus on cartographic material, in both Pennsylvania and New York. Fielding suggests that Chapin's large map of the United States is in fact the first American published map to be engraved steel. Around 1839, Chapin seems to have changed careers when he accepted a position as Commissioner of Public Schools in New York. In this capacity, Chapin developed an interest in working with and teaching blind children. Chapin served as headmaster of several schools for the blind in Ohio and New York. His most significant work with the blind took place at Overbrook School for the Blind, where he developed contemporary techniques for teaching and published the first dictionary for the blind. (Fielding, M. & Carr, J. Dictionary of American Painters, Sculptors, and Engravers, p. 61.) Learn More...