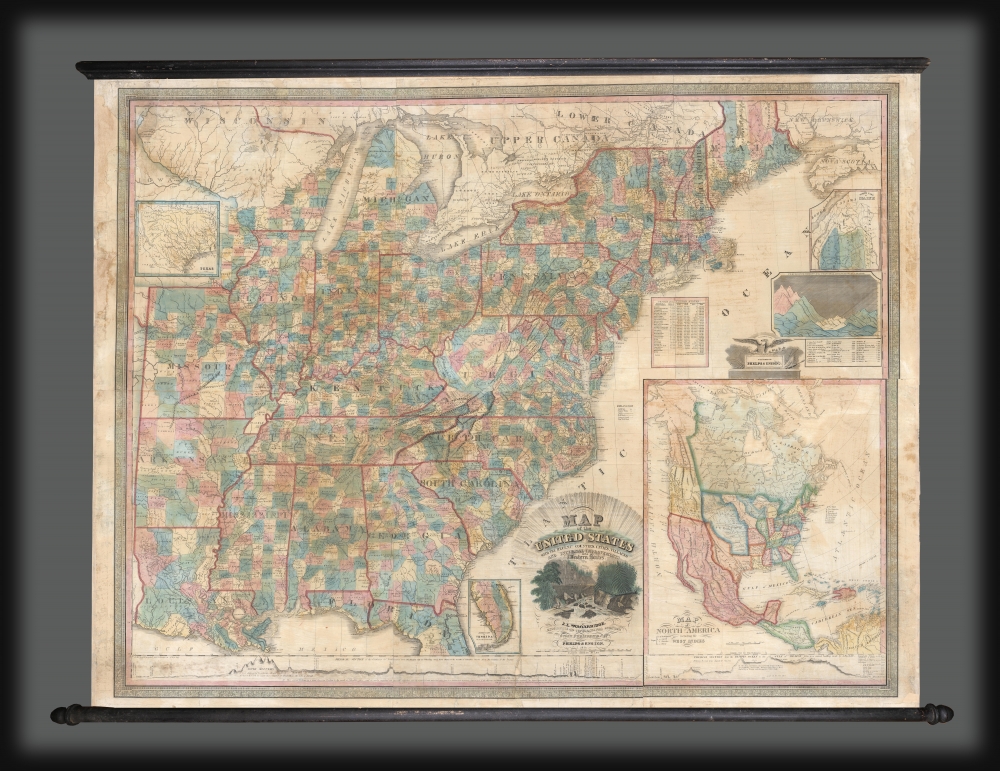 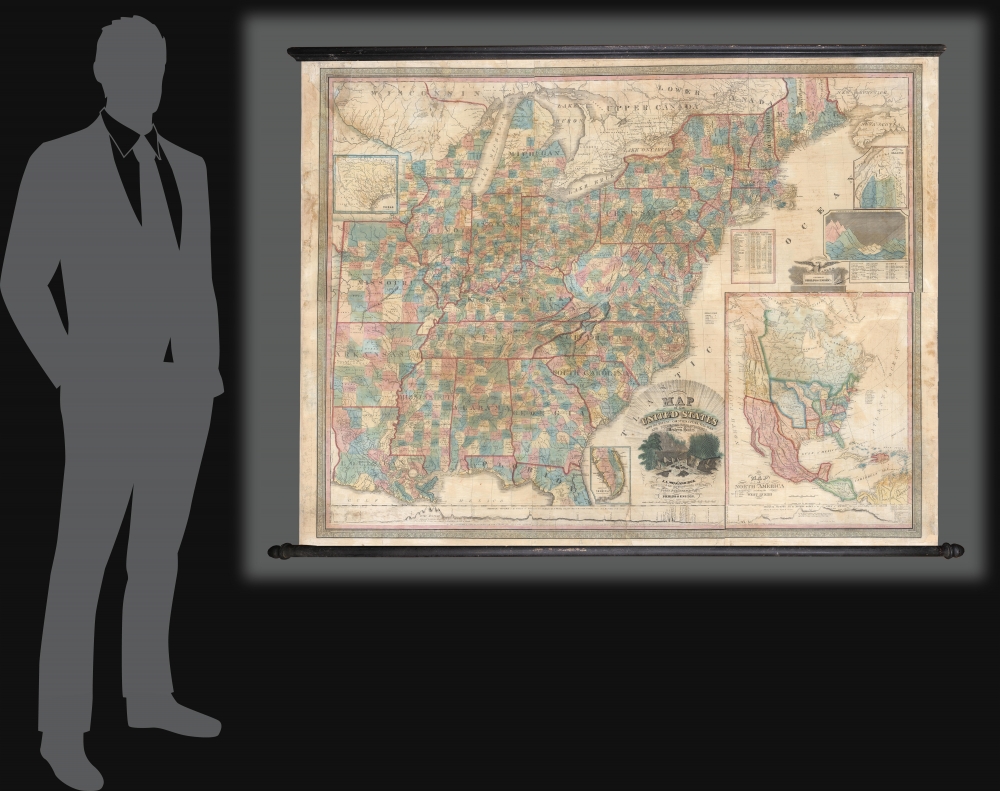 An impressive 1845 Phelps and Ensign map of the United States with an inset of the newly formed Republic of Texas. This map is a much revised and updated variant on the 1817 Varlé map, and more specifically, the 1832 Stebbins / Varlé reissue. It stands out for its inclusion of the Republic of Texas as an inset. The map also illustrates U.S. claims to British Columbia - part of the Oregon Question or 54-40 border debate between the United States and British North America.

The map covers the settled part of the United States before the Mexican-American War (1846 - 1847), stretching from the Atlantic seaboard west to encompass Missouri, Arkansas, and Louisiana, and from Ontario and the Great Lakes to Florida. Northern Maine and southern Florida are illustrated as insets - as is the newly formed Republic of Texas. Along the bottom of the map an elevation chart stretches from Atlantic to Pacific. A secondary table in the upper right illustrates the comparative heights of the great North American mountains. A large inset in the lower right covers the whole of North America, illustrating American claims to British Columbia, but not the boundaries of the Republic of Texas. The decorative cartouche, at bottom center, illustrates the Erie Canal at Little Falls, New York. An interesting table near New Jersey provides town, state, and territorial populations, breaking out the slave population in each, thus marking a clear divide between Free and Slave states.

Following the transcontinental crossing of North America by the British Northwest Company sponsored explorer Alexander MacKenzie (1792 - 1793) and the American expedition of Lewis and Clark up the Missouri to the mouth of the Columbia River (1804 - 1806), it became apparent that control of the fur and resource rich Pacific Northwest would bring great wealth and power to whoever could assert sovereignty. The American tycoon John Jacob Astor, with the permission of President Thomas Jefferson, was the first to attempt a permanent trading colony in the region, founding Astoria on the Columbia River in 1811. This quickly led to a confrontation with the established British-Canadian Northwest Company over this valuable territory. Americans in the 1820s through the 1840s argued that most of the Pacific Northwest should be part of the United States as a legacy of the 1803 Louisiana Purchase. England, on the other hand, argued for residual claims to the region derived from the MacKenzie Expedition and its fur trading empires: The Northwest Company and the Hudson Bay Company. The Oregon Dispute, as it came to be known, became an important geopolitical issue between the British Empire and the United States, especially after the War of 1812. Americans adopted the slogan '54-40 or Fight!' until the Oregon Question was finally resolved roughly along the current border by the 1846 Oregon Treaty.

This map first appears in 1817, where it is attributed to Charles P. Varlé. The plates were updated and revised in 1832 by R. Stebbins with new content and the Erie Canal at Little Falls cartouche, though that issue retained the Varlé imprint. When Varlé died in 1835, the plates were acquired by Phelps and Squire, who issued an 1836 edition without Varlé's imprint - adding the newly formed Republic of Texas as an inset. Of Woodbridge, who presumably updated the map, we can find no trace. We note subsequent editions in 1845 (present example) and 1847 by Phelps and Ensign.