1850 Wyld Map of the United States 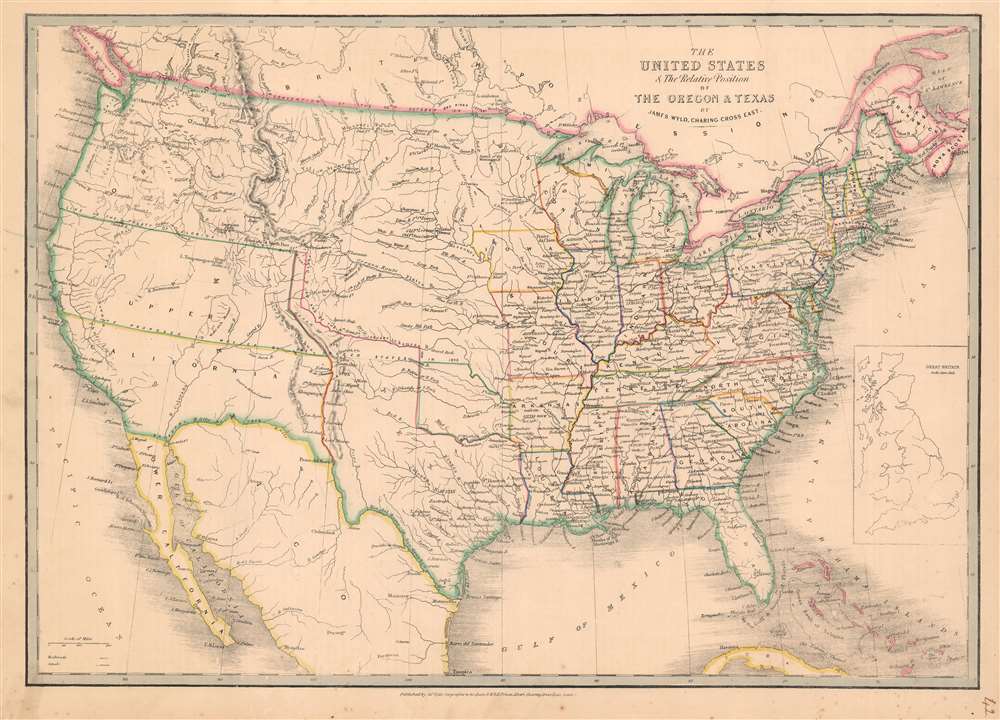 1850 Wyld Map of the United States

Depicts Texas at its fullest and traces the advance of the U.S.-Mexico border.
$850.00

This is a c. 1850 James Wyld map of the United States featuring Texas at its fullest before the Compromise of 1850. Wyld identifies three different borders between the United States and Mexico, only two of which existed. The Oregon Trail is also referenced, along with Astoria, Washington, and numerous forts throughout the American West.

This map exhibits the Texas border configuration at its fullest expression, expanding northwards with the 'Stovepipe' reaching into modern-day Wyoming, and west to include Santa Fe. The map shows clearly that the original assumption on the part of the government of the United States was that Texas was to be annexed with boundaries as defined by the Texan Congress on December 19, 1836. Twelve years before the Treaty of Guadalupe Hidalgo, Texas claimed the area between the Nueces and the Rio Grande. The Old Alcalde, Chief Justice O. M. Roberts, made the classic statement of the case in State vs. Bustamente (47 Tex. 320):

Texas claimed the territory [between the Nueces and the Rio Grande], in defining its boundaries on the 19th day of December 1836. In 1846, the claim was perfected by possession and by actual exercise of exclusive jurisdiction, and from that time, it was lost by the State of Tamaulipas, in Mexico, for all purposes whatever, whether of judicial action or the exercise of powers relating to eminent domain. And it never afterwards recovered such lost powers.

The disputed western boundary of Texas was substantially, but not entirely fixed in the Compromise of 1850.

The Mexican-American War (April 25, 1846 - February 3, 1848) ignited after the United States annexed Texas in 1845, which the Mexican government still considered to be Mexican territory. The war ended after Major General Winfield Scott captured Mexico City. This forced Mexico to the negotiating table, which concluded in signing the Treaty of Guadaloupe Hidalgo. Per the treaty, Mexico recognized the Mexican Cession, land conquered in the southwestern United States by the U.S. Army during the war and established the U.S.-Mexico border of 1848 as it is marked here.

This map was created and published by James Wyld c. 1850. The OCLC catalogs seven examples of this map, which are part of the institutional collection at the Newberry Library, the Birmingham Public Library, the University of Texas at Arlington, the University of Houston, the Denver Public Library, the National Library of Scotland, and The British Library. We have located two different states of this map, which are nearly identical. We believe the present map to be an example of the second state because the Menomonee River between Michigan and Wisconsin is labeled on the present stated and not on the other. We have been unable to find any other differences between the states.