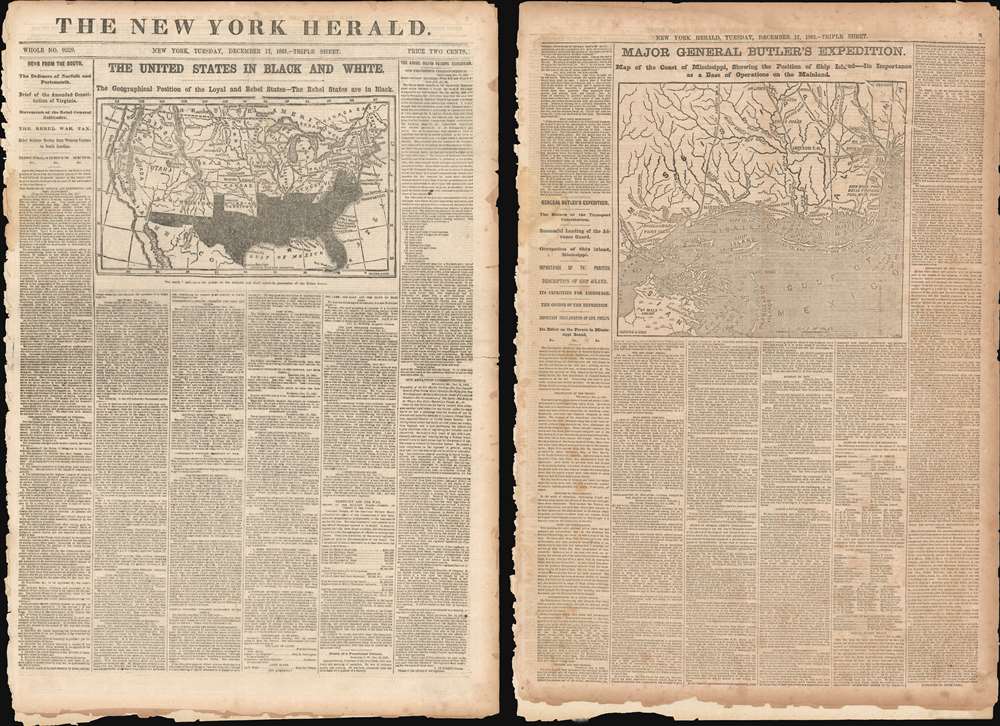 Presented here is the full December 17, 1861 edition of The New York Herald published eight months into the American Civil War. This edition features two maps: a front-page map of the United States that highlighting the Confederacy and a map of the Gulf Coast of Mississippi detailing Major General Benjamin Butler's landing on Ship Island. Ship Island, located twelve miles off the coast of Mississippi in the Gulf of Mexico, provided the Union Army with a base of operations in the Gulf. It also allowed the Union some flexibility, in that they could theoretically launch attacks against Texas or New Orleans from Ship Island, which caused the Confederacy significant anxiety.

Butler's fascination with Ship Island began in September 1861, when he was granted authorization to 'raise, organize, arm, uniform, and equip a volunteer force for the war'. His original planned called for an invasion of the Virginia coast. But, after receiving word that his intended target area had been evacuated by the Confederates, Butler changed his plans attacked the Gulf Coast, with an eye on taking New Orleans or establishing a foothold in Texas. In the end, he chose to occupy Ship Island, which had been garrisoned by Union marines and northern sailors since September. His initial plan included two infantry regiments and a light artillery battery, which left Boston Harbor aboard the SS Constitution on November 21, 1861. They landed on Ship Island on December 4, beginning an occupation that would last the rest of the war. Many different units passed through the island, with 15,000 men staging there in April 1862 in preparation for the assault on New Orleans. Many soldiers only spent a few days on the island, others as much as a few weeks. The longest tenured were the African-American 2nd Louisiana Native Guards, which arrived on January 12, 1863 and stayed through the end of the war. Ship Island also served as a Union prison, receiving its first detainees in June 1862. Civilians and Union soldiers convicted of serious crimes were imprisoned there. In October 1864, the first Confederate prisoners arrived on the island and it became a major holding area for prisoners of war, at one point holding more than 3000 detainees.

A Map of the Union and the Confederacy

While the map on the front page, at its base, is a map of the Union and the Confederacy, some interesting historical and geographical events are illustrated as well. The most obvious is Confederate Arizona, but another curiosity is the long panhandle attached to the Nebraska Territory.

These maps were created for and published in the Tuesday, December 17, 1861 edition of The New York Herald.

New York Herald. Tuesday, December 17, 1861.     The New York Herald (1835 - 1924) was a daily newspaper in New York City first published on May 6, 1835. It was owned by James Gordon Bennett, Sr and was the most profitable and popular daily newspaper in the United States by 1845. By 1861, the New York Herald had a daily circulation of 84,000 copies. The paper staunchly supported the Democratic Party during the American Civil War. James Gordon Bennett, Jr., the elder Bennett's son, took over the paper in 1866. During his time in charge, the Herald financed Henry Morton Stanley's expedition to Africa to find David Livingstone, as well as Stanley's Trans-Africa expedition. The Herald also financed George W. DeLong's failed expedition to the Arctic. After Bennett Jr. died in 1924, the Herald was sold to the New York Tribune, which formed the New York Herald Tribune.

Good. Full newspaper. Exhibits tattered edges.
Looking for a high-resolution scan of this?