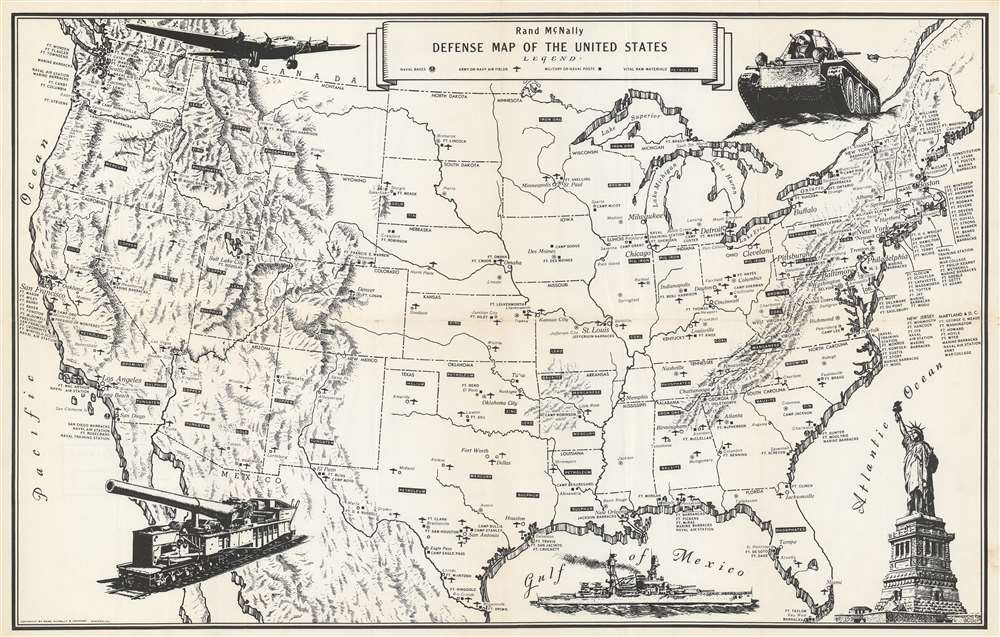 This is a c. 1941 Rand McNally map of United States military installations and strategic mineral deposits. The map depicts the continental United States from the Pacific Ocean to the Atlantic Ocean and from Canada to Mexico. U.S. army and navy bases are identified throughout the country, with different symbols used to mark specific types of installations. Naval bases are marked by and anchor inscribed in a circle, while army and navy air fields are highlighted by a silhouette of an airplane. It is important to note that at this point in American history, there was no independent U.S. Air Force. Prior to 1947, when the U.S. Air Force was established, land-based military aircraft had been the responsibility of the U.S. Army Air Forces, while sea-based operations were conducted by the U.S. Navy. The U.S. Marine Corps also had its own aviation division meant for close air support of Marine Corps operations. Other army or navy posts are marked by a black square. Strategic resources, such as oil (petroleum), gold, tin, mercury, coal, and iron (among others) are scattered throughout the map and are noted by while block letters inside in a black box. Little other detail is included, except state capitals that do not host a military base are labeled. Five pictorial vignettes adorn the map. Beginning in the upper left corner and moving clockwise an airplane, a tank, the Statue of Liberty, a battleship, and a rail gun are illustrated.

This map was created and published by Rand McNally c. 1941. This map is present in institutional collections at the University of Illinois Urbana-Champaign, Texas A and M University, the Buffalo and Erie County Public Library, and the Denver Public Library.