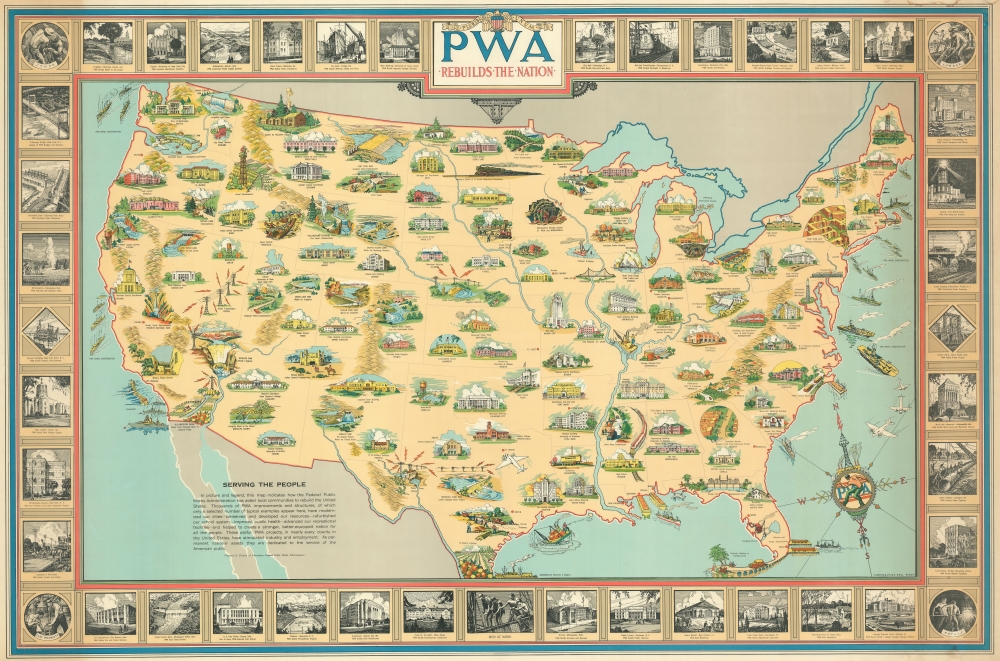 Pictorial wall map celebrating the accomplishments of the New Deal PWA! … just in time for the 1940 election!
$3,250.00

A rare and impressive 1939 large-format Earl Purdy pictorial wall map of the United States made to celebrate the accomplishments of the New Deal Public Works Administration (PWA). The map covers the entire United States with pictorial vignettes illustrating the PWA's many accomplishments, bolstering the nation's transportation infrastructure, education system, energy grid, and more.

Part of an Election Bid

This map was published in the run-up to the 1940 presidential election, in which Franklin D. Roosevelt sought reelection for an unprecedented third term. Roosevelt's PWA was one of his most popular New Deal initiatives and its universal acclaim, as celebrated here, boosted his reelection bid.

A textual note on the map tells the story:

SERVING THE PEOPLE. In picture and legend, this map indicates how the Federal Public Works Administration has aided local communities to rebuild the United States. Thousands of PWA improvements and structures, of which only a selected number of typical examples appear here, have modernized our cities - conserved and developed our resources - refurbished our school system - improved public health - advanced our recreational facilities - and helped to create a stronger, better-equipped nation for all the people. These useful PWA projects, in nearly every county in the United States, have stimulated industry and employment. As permanent national assets they are dedicated to the service of the American public.

What was the PWA?

The Public Works Administration was one of Roosavelt's signature New Deal initiatives. Founded in 1933, the PWA, as it is commonly known, was a large-scale public works construction agency in the United States headed by Secretary of the Interior. Between 1933 and 1939, the PWA funded private contractors and artist to comlete more than 34,000 projections, ranging from airports, large electricity-generating dams, major warships for the Navy, and bridges, as well as 70% of the new schools and one-third of the hospitals built during its period of activity. Although it is arguable that the PWA was a major success, it did drastically upgrade the national infrastructure and pump billions of dollars into the economy. It was therefore a broadly popular program.

This map was illustrated by Earl Purdy and published by the Division of Information of the PWA. The map is extremely scarce on the market but held by several institutions. It is well represented in the OCLC, but further research suggests that most such examples are merely digital holdings.

Earl Purdy (June 6, 1892 - April 22, 1971) was an American architect and artist active throughout the 20th century. Purdy as born in Cohoes, New York. He lived most of his lie in New Rochelle, New York. He served in the United States Navy during World War I before taking a degree in architecture at Colgate, then Cornell, the Columbia University. Graduating he worked with various architecture firms as a designer and draftsman. He was awarded the French Government Society des Archetects Première Medaille for excellence in design. As an artist, he completed work during the New Deal for the PWA, including a 1939 large-format pictorial map of the United States. He also designed the United Nations 'Geneva" stamp. His architectural work can be seen at the National Cemetery in Florence, the Veterans Hospital in Hawaii, Rye Playland, and Ringling House in Sarasota Florida. He was also a member of the American Institute of Architects, the American Watercolor Society, the University Men's Glee Club, and the University Club. He artworks includes a series of 34 caricatures hanging in the lounge of the Hotel Washington, Washington D.C., across the street from the White House. Learn More...