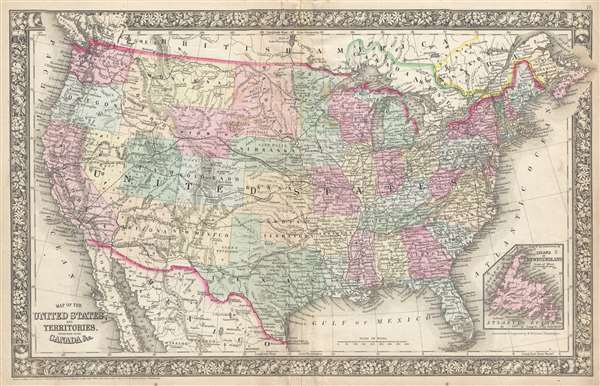 The first map to illustrate Wyoming Territory with borders including the Black Hills!

The first map to illustrate the Territory of Wyoming. This is an exceedingly rare intermediate state of Mitchell's map of the United States and the first map to include the territory of Wyoming – 3 years before it's official creation – based upon a failed 1865 congressional act. Although dated 1860, this map represents a transitional variant that appeared only ephemerally between the 1865 and 1866 states – with most of the differences focusing on Wyoming. The map covers the United States from coast to coast and includes parts of adjacent Canada, British America, and Mexico. An inset in the lower right details Newfoundland.

In January of 1865, Representative James M. Ashley of Ohio introduced a bill to the 38th Congress for the creation of a provisional Wyoming territory. No one knows with certainty why Ashley chose to name the new territory Wyoming, but many speculate that it may be a reference to Pennsylvania's Wyoming Valley, near where Ashely was born. In any case, in Ashley's version of the bill, Wyoming extended eastward as far as 25th meridian from Washington (102°W from Greenwich), to including the Black Hills of South Dakota and the Nebraska Panhandle, but omitted other lands in Idaho and Utah that were ultimately incorporated into the map. The bill died in committee later that year and, although the idea of a 'Wyoming Territory' was reintroduced as 'Lincoln' in bills dating to 1866 and 1867, it was not organized into a Territory until 1868.

States of the Map

Mitchell, who followed the politics of the westward expansion closely, must have believed the bill would pass when he made this map. The map exhibits a partial plate erasure of the earlier more common 1865 western Dakota boundary along the 104th Meridian and his revision of the plate to reflect the new name 'Wyoming.' When the bill failed to pass, Mitchell again revised the plate for the new 1866 version of the map wherein 'Wyoming' reverted to 'Attached to Dakotah'. It is also of note that this is the last edition of Mitchell's New General Atlas to employ the floral motif border. Mitchell introduced a simplified vine motif border in 1866 that his atlas maps would use until the firm closed in 1887.

This is one of the rarest of all Samuel Augustus Mitchell Jr.'s maps. It is not associated with any particular edition of Mitchell's atlas and was issued only briefly in mid to late 1865.

Mitchell, S. A., Mitchell's New General Atlas Containing Maps of the Various Countries of the World, Plans of Cities, Etc., embraced in Forty-Seven Quarto Maps, Forming a series of Seventy-Six Maps and Plans, together with Valuable Statistical Tables     Mitchell's New General Atlas was published by Samuel Augustus Mitchell, Jr., the son of the prolific cartographer Samuel Augustus Mitchell. Many of the plates are derived from the his father's Mitchell's Universal Atlas, but not directly. The Mitchell's Universal Atlas was initially sold to Thomas, Cowperthwait, and Company in 1849, and again to Charles Deliver in 1856. It was Deliver who introduced the new vibrant color scheme, abandoning the older Mitchell's Universal Atlas green borders and themes for bright reds, blues, and yellows. Samuel Augustus Mitchell, Jr. acquired the Deliver plates in 1859. He added his own floral motif border, but doubled down on the vibrant color scheme, thus introducing to the American public the most vividly colored American atlas of the 19th century. In 1860, he published the first edition of his New General Atlas and, despite a slump in sales during the American Civil War, attained a level of success to rival his father. Mitchell would continue to publish the New General Atlas until 1887, when the firm formally closed.