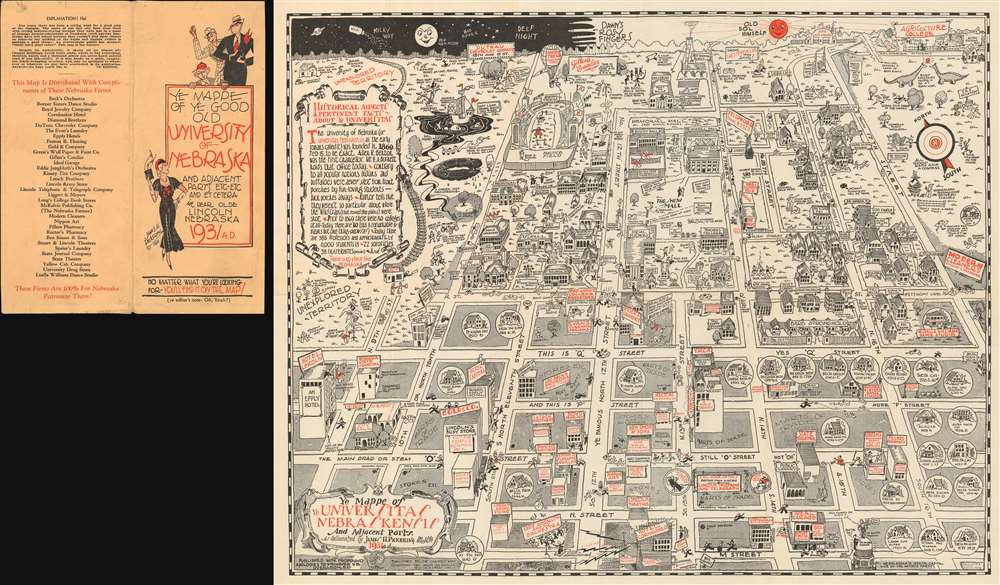 Depicts both the N.U. Coliseum and Memorial Stadium and states that There Is No Place Like Nebraska.
$1,500.00

This is a 1931 James H. Pickering pictorial map of the University of Nebraska in Lincoln, Nebraska. The map depicts the region from 9th Street to 17th Street and from the State Fairgrounds to M Street. Wonderfully illustrated, buildings across campus and downtown Lincoln are illustrated and labeled, including Morrill Hall, Andrews Hall, Bessey Hall, and Brace Laboratory, the four of which are still standing on campus and host classes. Others, such as the Law College, the library, and the Teacher's College have since been demolished and moved to other locations on campus. Two fixtures on campus, the N.U. Coliseum and Memorial Stadium are also illustrated, with Dana X. Bible, then the head coach of the Nebraska Cornhuskers football team, shown standing on the practice field just outside Memorial Stadium. Fraternity and sorority houses seep to be everywhere, with over a dozen located on campus along 16th Street and along R Street, while numerous others are highlighted in 'bubbles' that provide the address of the house and which fraternity or sorority lives there.

Outside campus, the offices of the Nebraska State Journal (now the Lincoln Journal-Star), the Lincoln Telephone and Telegraph Building, and the public library are among the highlighted sites. The Cornhusker Hotel is depicted in the same location as it is today, between 12th and 13th Street on M Street, and the dome of the Nebraska State Capital makes an appearance in the lower right quadrant. It is important to note that the Agriculture College, today known as East Campus, is illustrated in the upper right corner near the intersection of 33rd and Holdrege Streets.

This map is definitely not a typical city or campus map. Myriad comical illustrations and asides are included throughout, including a pair of dinosaurs 'having a go at puppy love' in the upper right corner, not far from a 'poor ol' buffalo' and some 'Cornhuskers husking corn between classes'. The 'secret societies' of the university, Mortar Board and the Innocents Society, also make an appearance, in the open space near the Administration Building and Pharmacy Hall. Students, deans, and even the campus prowler are also illustrated. Night and day both appear in the sky, with 'Old Man Moon' and 'Old Sol Himself' making an appearance. A short history of the university is situated along the left border that ends with the schools unofficial official motto, 'There Is No Place Like Nebraska'.

This map was drawn by James H. Pickering and published by the Campus Map Company of Lincoln, Nebraska in 1931. This map is exceedingly rare, as it does not appear in the OCLC and have only been able to trace one example in an institutional collection at the Nebraska State Historical Society. We have also only found one record of this map ever appearing on the private market.

James H. Pickering (August 29, 1904 - June 28, 1969) was an American artist and humorist. Born in Kansas City, Missouri, Pickering attended the University of Nebraska in Lincoln, Nebraska and graduated with a Bachelor of Arts Degree in 1931. He worked for Amos Parish and Company Fashion Merchandising Associates in New York City from 1934 - 1961 and then opened his own firm.

Nebraska State Historical Society 13000-3323 [dup1].
Looking for a high-resolution scan of this?