1960 Britton Pictorial Map of the University of Virginia 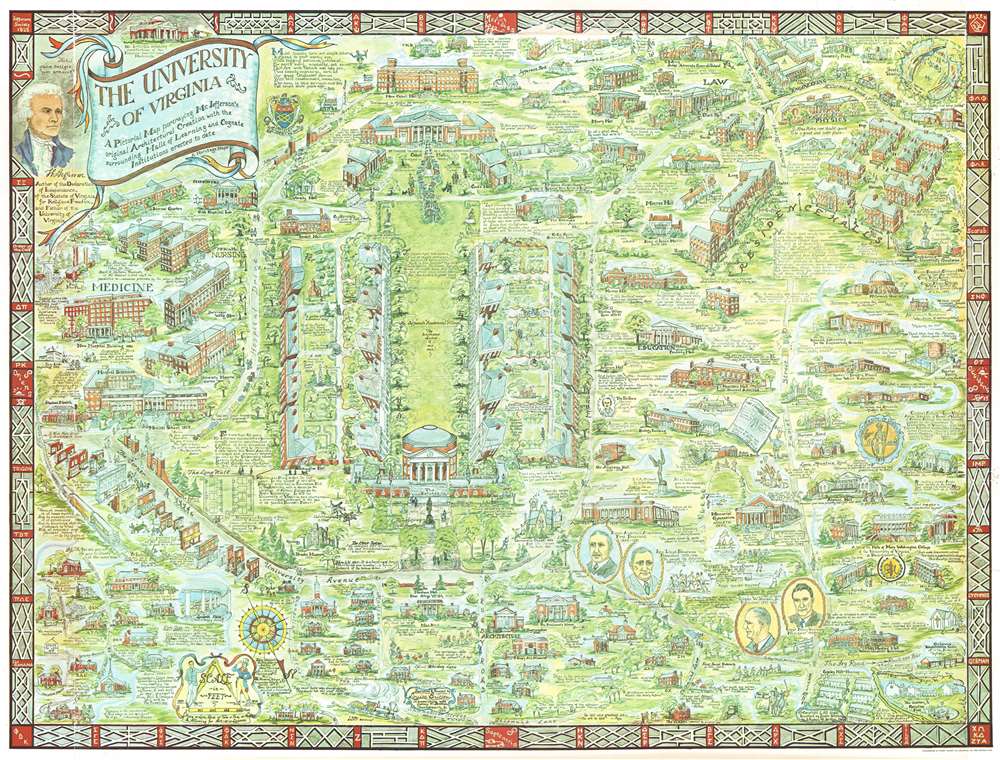 1960 Britton Pictorial Map of the University of Virginia

A lovely pictorial map of the campus of the University of Virgiinia.

The University of Virginia A Pictorial Map portraying Mr. Jefferson's original Architectural Creation with the surrounding Halls of Learning and Cognate Institutions erected to date
1960 (dated)     23.75 x 31.5 in (60.325 x 80.01 cm)

This is a 1960 Laura and Sydney Britton pictorial map of the University of Virginia. The map depicts the campus from the medical school to Scott Stadium and from the U.S. Army's Judge Advocate General School and faculty housing to Copeley Hill, housing for married students. Highly detailed, myriad buildings are illustrated and labeled in profile throughout the campus Alderman Library, The Rotunda, and Old Cabel Hall. Others include halls dedicated to law, engineering, and physics, along with all the residence halls, which are illustrated along the right border. Streets and pathways run across the campus, allowing for easier access to the buildings, most of which are labeled. An attractive portrait of Thomas Jefferson is situated in the upper left corner near the title cartouche. Quotes from individuals, both famous and every-day, are scattered throughout the map lending it an air of gravitas.

This map was created by Laura and Sydney Britton, lithographed by Everett Watty Company and published by 'A Heritage Map'. We have been able to locate only one example in an institutional collection at the University of Virginia and no market history, making this piece incredibly rare.

Louise Esther (Weibel) Britton (1900 - 1988) was an American artist. Born in the United States, she attended high school in Montreal at Montreal High School before attending McGill University. She graduated with a LLB (Bachelor of Laws) in 1922 and an LLM (Master of Laws) in 1923, although she never practiced law. She married Dr. Sydney Britton (February 24, 1892 - 19??) in 1924 and they settled in Virginia. We are aware of only 1 map issued by Britton, a pictorial map of the University of Virginia. A letter surfaced from the author's daughter pasted to the back of a framed copy of the map. The letter suggested that most copies were lost to flooding at her beach house and the original plates lost in a fire at the Richmond printing house. Learn More...


Sydney William Britton (February 24, 1892 - 19??) was a British doctor. Born in England, Britton attended McGill University in Quebec from which he received a Bachelor of Science degree in 1922 and an M.D. in 1924. He soon embarked on his medical career accepting positions at Harvard, McGill, Johnson Hopkins, and finally as a Professor of Physiology at the University of Virginia. He was awarded a Fellowship by the John Simon Guggenheim Memorial Foundation in 1937. Britton married Louise Esther Weibel in 1924 and the couple had four children: two sons and two daughters. Learn More...