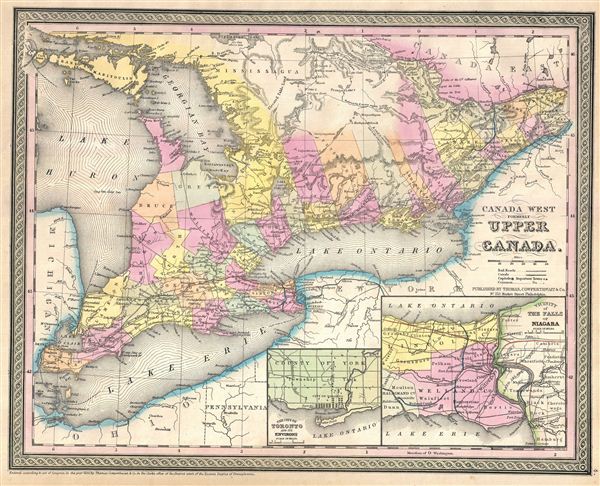 An extremely attractive example of S. A. Mitchell's 1854 map of Upper Canada or Ontario, Canada. Centered on Lake Ontario, this map covers from Lake Erie eastward from Detroit, Michigan and Lake Huron at the northwest, as far as Quebec with Grand Manitoulin and Georgian Bay to the north. In the lower right quadrant, a small inset details the Country of York with a larger inset focusing on the vicinity of Niagara Falls. The whole is engraved and colored in Mitchell's distinctive style with green border work and vivid pastels. Political and topographical features are noted and color coded with elevation rendered by hachure.

This map's detailing of the three lakes, Huron, Erie and Ontario, recalls the Treaty of Reciprocity, in effect from 1854 to 1866. The Treaty was a move towards free trade, in which the United States and Canada opened borders and shared navigation rights.