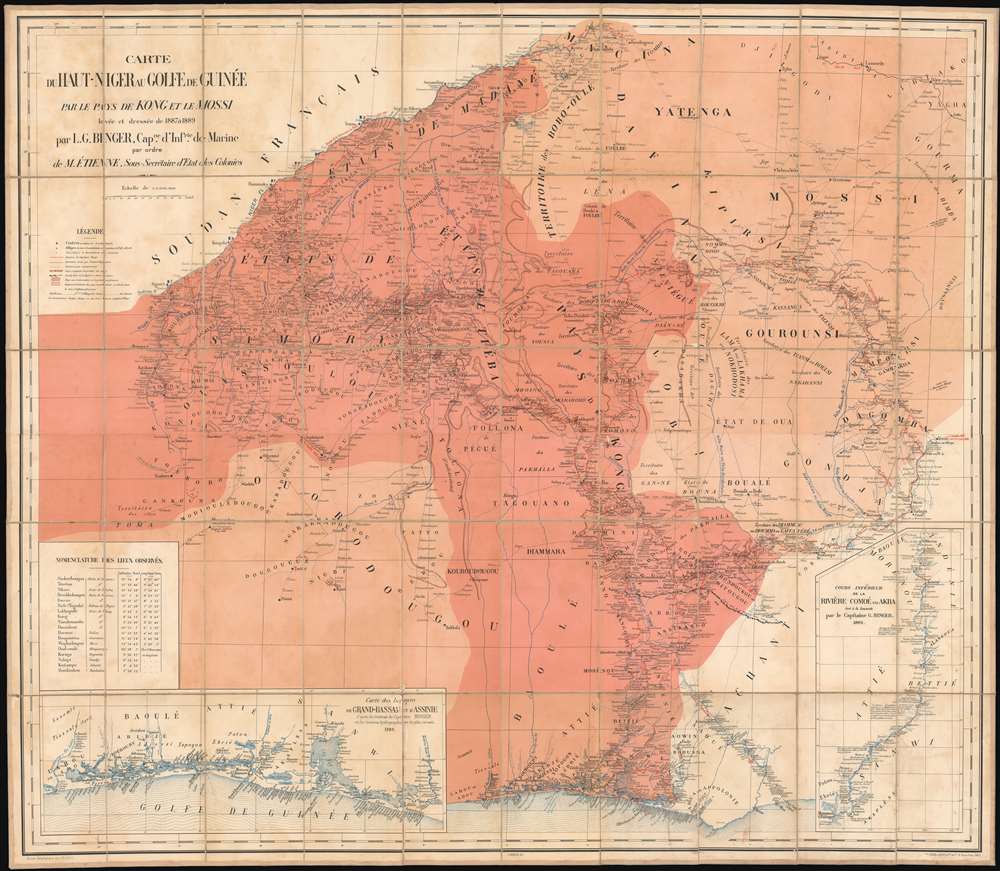 A Monumental Catalogue of European Exploration in Mali and The Ivory Coast
$3,500.00

This is Louis-Gustave Binger's 1890 map of Africa's Upper Niger River, covering a region that now includes parts of Guinea, Mali, Burkina Faso, Ghana and Côte d'Ivoire. The map includes insets detailing the coastal regions of the Côte d'Ivoire, and the lower course of the Comoe River, by which route Binger reached the Gulf of Guinea from his travels to Kong. This is the first and most detailed map of the region south of the Upper Niger, produced by the French as they moved to establish colonial control over the region. In particular, the map shows the Herculean travels of Louis-Gustave Binger, performed in an atmosphere of pronounced hostility: throughout the period of Binger's exploration, the Wassoulou Empire (led by Samory Touré) was in armed opposition to French colonial efforts. Binger's journey to the Empire of Kong, a pre-colonial Muslim state in what is now Côte d'Ivoire, was made explicitly to forge alliances in the region against Samory. Binger's negotiations with the Kong in 1888 established French control in the region as part of French West Africa, instantly painting the Kong as a target for Samory Touré. Nonetheless, within a decade of receiving the 'protection' of the French, the last stronghold of the Kong was burned to the ground.

Although the feats of any one of them is - perhaps deliberately - dwarfed by the tracks of Binger's own exploration, the map is a catalogue of 19th century European activity in this region. René Caillié's 1827 - 28 route to Timbuktu is shown in part, running from Kankan on the Milo River to Timé before turning northeast towards Hamndallahi (and ultimately off the map en route to Timbuktu.) Caillié would succeed in his efforts to be the first European to return alive from Timbuktu (the Société de Géographie was offering a prize of 9000 Francs to the first person to return with a description of the place. Caillié won it, a sum that would exceed a million dollars in today's money.) The allure of Timbuktu seems not to have been lost with the passing of the Société prize: we also see here a portion of Heinrich Barth's 1853 journey from Lake Chad to Timbuktu, following the lower Niger River north. The 1880-81 track of Joseph Simon Gallieni (infamous in Madagascar for his exile of Queen Ranavalona, famous for his taxicab-driven attack of the German west flank at the First Battle of the Marne) is shown. His route appears south of the Niger, roughly parallel to it from Bammako to Ségou Sikoro.

The Liberian adventurer, traveler and politician makes an appearance here: in 1868, he traveled to Musardu, a city in what is now found in Republic of Guinea in the western part of the Mandingo region shown on this map. He was one of the very first non-indigenous people to explore that area. His arrival is dated December 7, 1868; he would return to the city a year later. He published Narrative of a journey to Musardu: the capital of the Western Mandingoes in 1870.

An 1882 track appears near the coast, desribing Amédée Brétignère's route with Maurice Chaper: Their expedition was to confirm the presence of gold mines in Assinie, on the coast of Côte d'Ivoire. (The entrepreneurial Brétignère would that year introduce the colony's first coffee plantation at Elima, just to the north.) Tracks of the journeys of R. La Touche Lonsdale in Ashanti and Yendi are shown for the years 1881-1883, during which time Lonsdale appears to have been looking after British gold interests among the Ashanti and attempting, with limited success, to convince the Ashanti king to abandon human sacrifice; The 1884 track of the British T. F. Pullen is shown along the border of Kong and Ashanti: he had been sent to determine the boundary of English and French possessions in the region. Germany did not neglect the region entirely - assigning Curt von François to explore from explored from German West Africa up to the Mossi territory, and Yendi. His tracks are shown.

Much of the portion of the map marked as French Protectorate is also named Etats de Samory, which are the domains of Samory Touré, leader of the Wassoulou Empire. With modern rifles purchased from the British, Touré waged war against the French and France's allies in the Mandingo Wars from the 1870s until his defeat and capture by the French in 1898. The map reflects the situation on the ground at the close of the first Mandingo War (1882-1886) with the French occupying Bamako and Samory's border fixed on the Niger following a successful French offensive in 1886. The map marks two battles: One French victory: the February 26, 1882 relief of Kéniéra (in which Samory Touré's siege of the French-allied town was broken by a reckless, hugely outnumbered assault by Colonel Gustave Borgnis-Desbordes, whose passage from the Falama crossing of the Niger to Kéniéra is alsoshown on the map.) The other was a defeat: an 1885 French expedition under Commandant Combes. This French attempt to seize the Buré gold fields failed under Samori Touré's counter-attack. Dividing his army into three mobile columns, Touré worked his way around the French lines of communication and forced them to withdraw. The presence of French forts along the Niger (and the display of flags, not least on this map) were an expression of Effective Occupation of the region, an important doctrine established in the 84-85 Berlin Conference (see below.) An explosion of exploration following the Mandingo War is recorded on the map: Etienne Peroz's military expedition of the upper Niger in 1886. Caron and Lefort's Galliéni-assigned expedition by gunboat down the Niger and on to Timbuktu is marked (including a 1887 side-trip to Bandiagara.) Marcel Treich-Lapléne's 1887-88 journey from Krinjabo to Kong is shown: though he would die in 1890, his brief tenure led him to be the first European to explore the Côte d'Ivoire; he would become the colony's first administrator. The 1889 track of M. Bonnardot, a naval artillery officer, is shown penetrating deep into Samory territory - the furthest achieved by a European since Caillié.

The Mountains of Kong

The central portions of this map are devoted to the Empire of Kong, an area dominated on earlier maps with a mountain range of the same name. The mountain range - supposedly supporting the headwaters of the Niger River - began appearing on maps the late 18th century, with John Cary going so far as to connect the range with the Mountains of the Moon in the east. Binger's travels through Kong to the Gulf of Guinea were the first to prove that the mountain range did not in fact exist.

The map is a snapshot of the 'Scramble for Africa,' the series of late 19th and early 20th century occupations, usurpations, annexations, divisions, and land seizures by European powers in Africa, here specifically France, Great Britain and Germany. Though the Scramble for Africa was mainly characterized by heightened occupation and direct ownership of colonial lands, the French here were engaged in a more traditional 'treaty based' colonization. The Scramble led to a number of new African states, many of which remain today, but few of which paid heed to traditional rivalries or cultural distinctions. The scramble culminated in the Berlin Conference of 1884, wherein European colonization of Africa was regulated and made official and the doctrine of Effective Occupation was introduced.

Dated 1889 (and sometimes appearing in OCLC with this date) this issue was probably published in 1890. A further, entirely re-worked edition of 1893 is known to exist. Both editions of the map are rare. We see no examples of either in auction records or dealers' catalogues, and none on the market now. OCLC shows examples of this map in only six institutional collections, with the 1893 exhibiting similar scarcity.

Louis-Gustave Binger (October 14, 1856 – November 10, 1936) was a French officer and explorer. In 1887 he traveled from Senegal up to the Niger River, then further south to arrive at Grand Bassam in 1889. During the expedition he laid claim to the Côte d'Ivoire for France. Beginning in 1892 he oversaw the formation of boundaries between the British and French colonies in Western Africa, and served as governor of the Côte d'Ivoire from 1893 to 1898. Following his tenure there he returned to France to an administrative post at the French Colonial Ministry. The city of Bingerville in the Ivory Coast is named after him.

Very good condition. Dissected and mounted on linen for folding as issued.