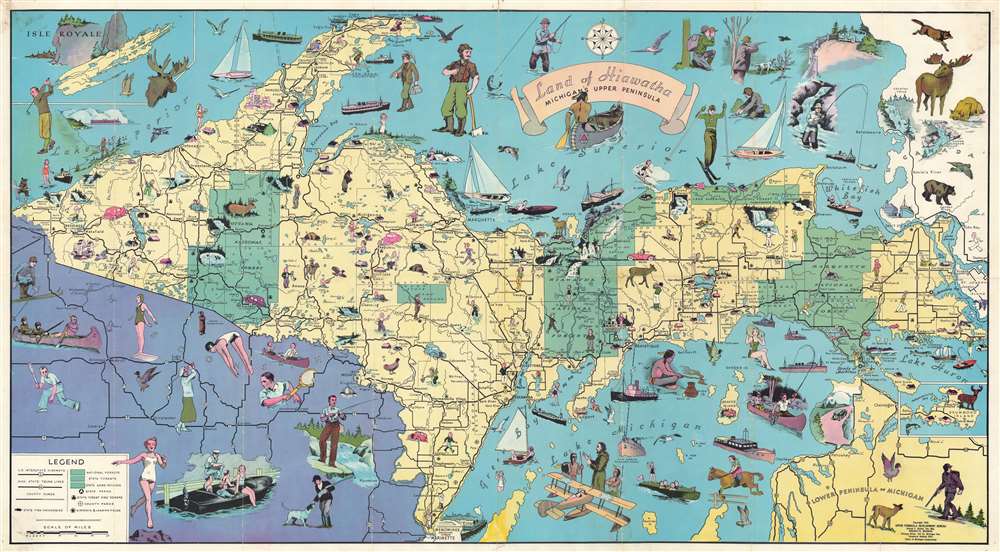 This map was copyrighted and issued in 1935 by the Upper Peninsula Development Bureau, under George E. Bishop. This map was issued and published separately, but examples printed by Ann Arbor Press do occasionally appear folded into a 1936 promotional brochure entitled Lure of the Land of Hiawatha. That multi-page brochure features a mini-atlas of UP Counties, in an identical pictorial style attributed to 'Frank R. Harper, Staff Artist'. We believe this map to be by the same figure. The map is rare to the market. The OCLC notes five institutional holdings spread between multiple entries.

Frank Robert Harper (August 19, 1908 - December 31, 1995) was a fine and commercial artist active in Michigan in the middle part of the 20th century. Harper was born in Grand Rapids, Michigan. Early records put him in Ann Arbor, where in from at least 1835 to 1937 he was a staff artist with the Upper Peninsula Development Bureau. He issued several pictorial maps of the Upper Peninsula for the Bureau. By 1940, he was working as a commercial artist in Grand Rapids. We have not been able to trace his activity past 1940, but it may have relocated to Washington State. Learn More...