1822 Melish Map of the United States of America 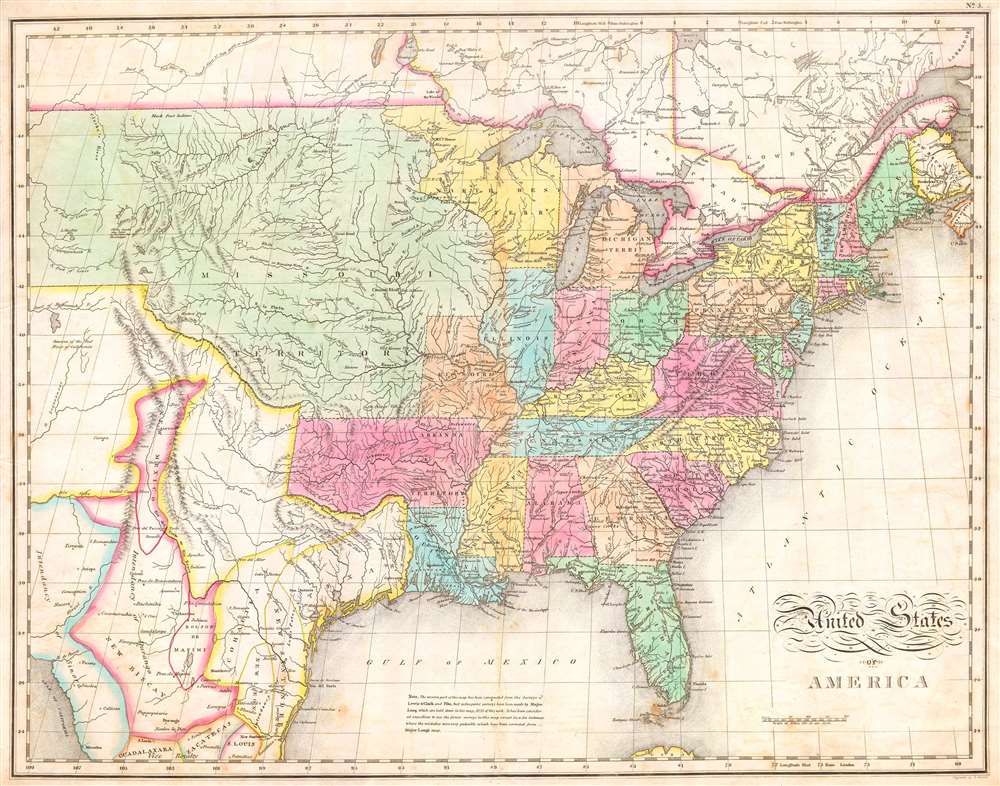 1822 Melish Map of the United States of America

One of the most important American maps of the United States to appear in the early 19th century. Depicts the United States and Mexico roughly from the Atlantic to the region immediately west of the Rocky Mountains, including the massive Missouri Territory, Texas and parts of Mexico. This map was produced by the joint efforts of three important American mapmakers: John Melish, Benjamin Tanner, and Mathew Cary. It had its origins in Melish's 1812 pocket format map of the United States. Over the following fifteen years the map would be updated, revised, and improved for various reissues. The current example is from Carey and Lea's Atlas.

Referencing the cartographic and exploratory work of Lewis and Clark, Pike, and Major Long, this map attempted to give an accurate picture of the western United States. Shows both the newly formed state of Missouri and the massive Missouri Territory. This extraordinary tract of land extended form the Mississippi River westward off the edge of the map. In a seminal move that would later define the boundaries between the United States and New Spain, Melish delineated the 100th meridian as the border between Mexico ( Texas ) and the United States. Heading east, the border continued south along the Arkansas River and then eastward along the Red River Valley. The Arkansas Territory extended westward as far as Texas including the territory claimed by the modern day state of Oklahoma. On the eastern side of the Mississippi we see a large Northwest Territory bounded by Michigan on the east and Illinois on the south. The part of Michigan Territory on the western side of Lake Michigan is shown extending southward as far as the Illinois border. Virginia remains undivided. South of the border, in Mexico and Texas, New Mexico is shown as a sliver of land, containing Taos and Santa Fe, extending along the Rio Bravo (Rio del Norte) into the Intendency of Durango. Texas place names include Mesa, Loredo, San Saba, San Antonio, Pres del Alter, Ft. Matagorda, Nacagdoches, Panee Village, Cardo Village, Haytones, and Galvezton (Galveston) well inland on the Rio de Nieves or Neches. Apache Indians shown in Big Bend country. The map as a whole features excellent detail regarding mountain ranges and river valleys. Attempts with some success to place the various American Indian tribes as well as forts and cities. Also includes explorer's notes, mostly referencing Louis and Clark, in the Missouri Territory. All in all, one of the most important maps of the United States published and a must for any serious Texas or Transmississippi collection.

This map was published for inclusion as plate no. 5 in the 1823 issue of M. Cary and C. V. Lavoisne's A Complete Genealogical, Historical, Chronological, and Geographical Atlas.

John Melish (June 13, 1771 - 1822) was an early 19th century American writer, publisher and mapmaker based at 209 Chestnut Street, Philadelphia. Many historians consider John Melish to be the first truly great American commercial cartographer and responsible for some of the most influential maps in the history of North America. Melish was born in Scotland in 1771. As a young man he apprenticed to a Glasgow cotton merchant and in this capacity visited America no less than four times between 1798 and 1809. In 1806 Melish attempted to create his own cotton important-export company based in Glasgow, Scotland and Savannah, Georgia. Unfortunately, deteriorating relations between the United States and Great Britain resulted in the 1807 trade embargo, which all but destroyed Melish's fledgling company. In 1811 Melish finally left Scotland to permanently relocate in Philadelphia. Melish had never been truly satisfied with the quality of travel writing available regarding the new republic and so, in 1812, published his own contribution to the genre. Melish based his first major publication, the cartographically rich, Travels in the United States of America in the Years 1806 & 1807, and 1809, 1810 and 1811, on the copious notes taken during his own travels as a cotton merchant. Travels enjoyed an immediate success and even caught the eye of Thomas Jefferson, then President, who sent copies of the work to friends in France and Italy. Partially in an attempt to illustrate his own travels and partly in response to a general need for good cartographic materials, Melish turned to map publishing. By 1814 he was styling himself as a "Geographer and Map Seller" and had published several independent maps, geographies and gazetteers. Melish's most important work is most likely his iconic representation of the United States first published in 1816, Map of the United States with the contiguous British and Spanish Possessions. This visionary large format map was the first American commercial map to show the United States extending from coast-to-coast in a remarkably prescient expression of the Doctrine of Manifest Destiny. Melish died suddenly of unknown causes in December of 1822. He is buried in Philadelphia. (Carter, E. C., Surveying the Record, pages 40 - 49. Ristow, W., American Maps and Map Makers, pages 110-115. 143, 154, 166-168, 191, 246, 281, 446. Wolfgang, M.E., "John Melish: An Early American Demographer." Pennsylvania Magazine 82 (1958): pages 65-81.) Learn More...

Very good condition. Light age toning to margins and centerfold. Minor marginal tear extending about 1.2 cm from the edge of the paper. Original platemark visible. Half inch margins all around. Original color.

Wheat, Carl Irving, Mappinng the Transmississippi West, 1540-1861, 338.
Looking for a high-resolution scan of this?