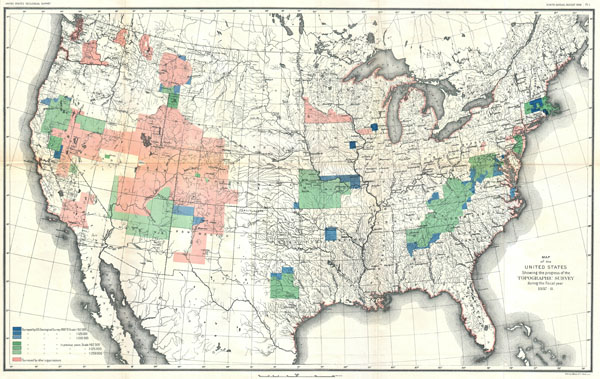 This uncommon map of the United States was issued in 1888 by the U.S. Geological Survey. Depicts the Entire United States with various shaded zones indicating the progress of the Topographic Survey. Various zones show areas that have been surveyed by the Geological Survey, the scale to which they were surveyed, and the year in which they were surveyed. Also shows the parts of the United States that have been surveyed by other organizations. Concentrates almost exclusively on geological fetures, but does note state borders, American Indian reservations, and major cities. Shows Yellowstone Park, was established in 1872. The area that is now the Oklahoma panhandle is labeled 'Public Lands.'

University of Illinois at Urbana-Champaign, Map & Geography Library, G3701.B5 1892.G3.
Looking for a high-resolution scan of this?