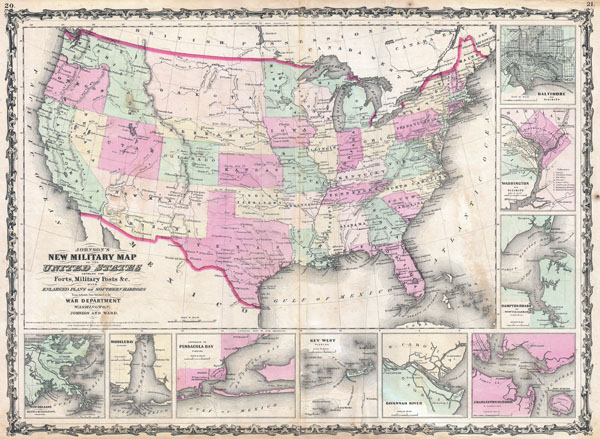 An exceptional example of A. J. Johnson's highly desirable Military Map of the United States. Created at the height of the American Civil War, this map was issued by Johnson in order to capitalize on the general interest in the War. This is the more desirable of the two extant variants of this map. This variant, showing a layout of the states rather than military zones, offers a wonderful insight into the political situation shortly following the outbreak of the American Civil War. Shows the various states and territories along with several hundred forts and other military installations. Includes the briefly extant Confederate Territory of Arizona occupying the southern portion of New Mexico Territory. This interesting territory was declared by the Texan Confederate Col. John Robert Baylor in 1861 and was in theory extant until the end of the Civil War, but in fact recaptured by Union forces scarcely a year later. Features the strapwork border common to Johnson's atlas work from 1860 to 1863. Published by A. J. Johnson and Ward as plate numbers 20 and 21 in the 1862 edition of Johnson's New Illustrated Family Atlas. Dated and copyrighted, 'Johnson and Browning,' 1861.

Very good. Original centerfold exhibits minor discoloration and wear. Old crease to the right of centerfold - we have flattened it but it still exhibits some wear, see photo. Light overall toning. Blank on verso.
Looking for a high-resolution scan of this?