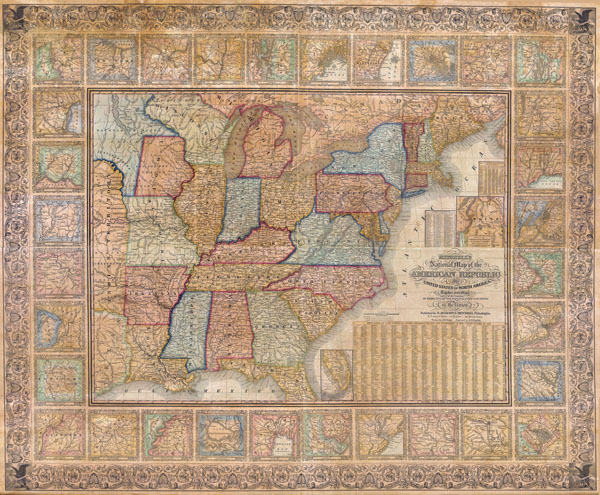 The S. A Mitchell firm published this map, both in wall and folding pocket format, from 1843 to 1850. It is considered a highly important work of mid 19th century American cartography. Through its multiple issues historians can follow the rapidly changing national and domestic political borders. This particular map dates to 1845. This map was drawn by J. H. Young and engraved by H. H. Brightly. Includes numerous features from an inset map of Maine's northern boundary as defined by the Treaty of 1842 to thirty-two inset city plans. City plans include, among others, Raleigh, North Carolina; Richmond, Virginia; Louisville and Frankfort, Kentucky; Springfield, Illinois; Indianapolis, Indiana; St. Louis, Missouri; Rochester, New York; New Haven and Hartford, Connecticut; Burlington, Vermont; Providence, Rhode Island; Portland, Maine. A detailed table located below the title cartouche relations populations statistics for every county in each state or territory. Dated and copyrighted 1845.

Very good condition with original color and original wooden rollers. Professionally conserved, restored, cleaned and re-backed with new linen. The whole is in extremely good condition. Usual overall toning. Minor damp browning along upper margin – see photos. Measurements do not include original rollers, which are attached but can be removed at the buyer's request.