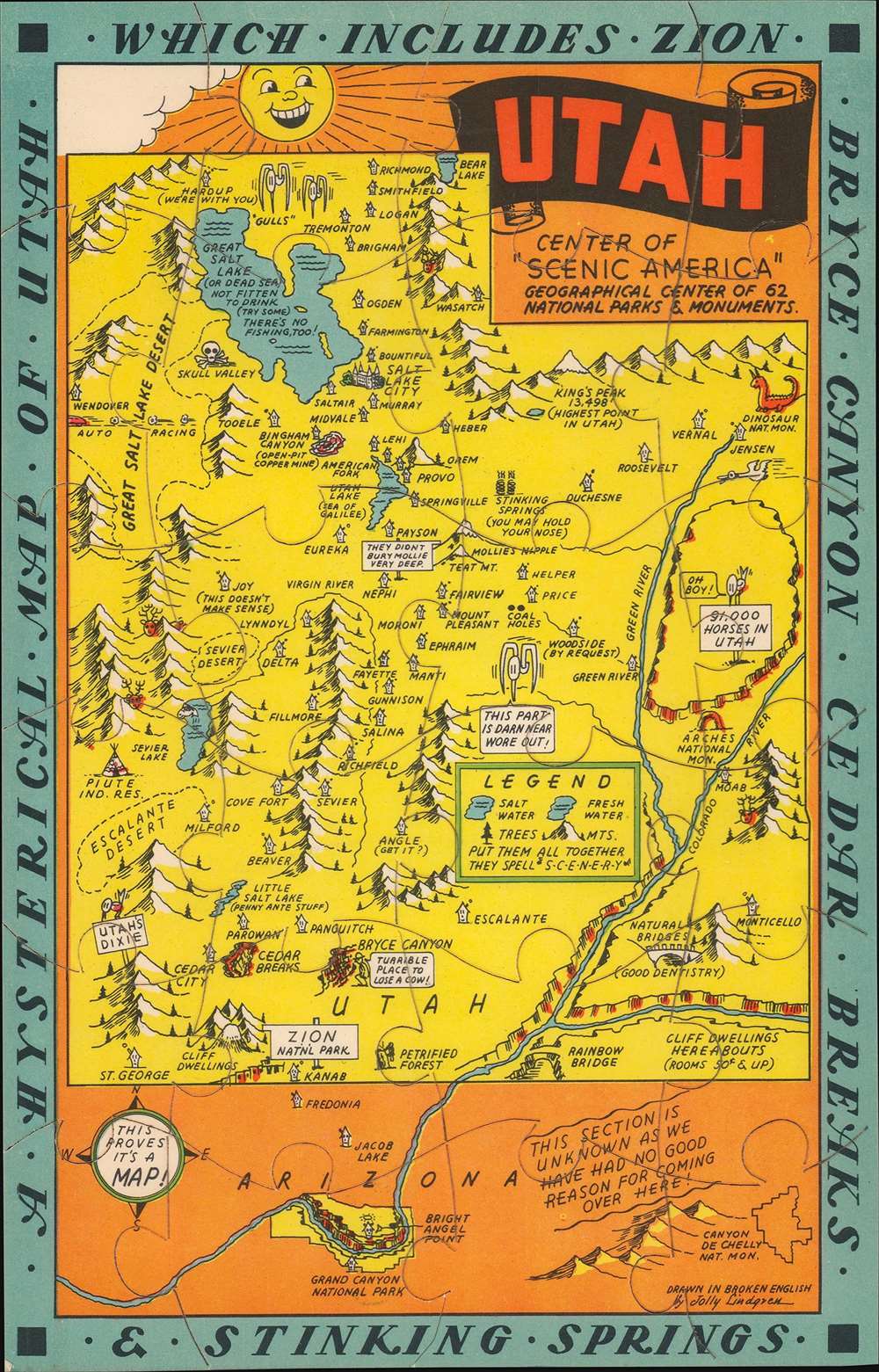 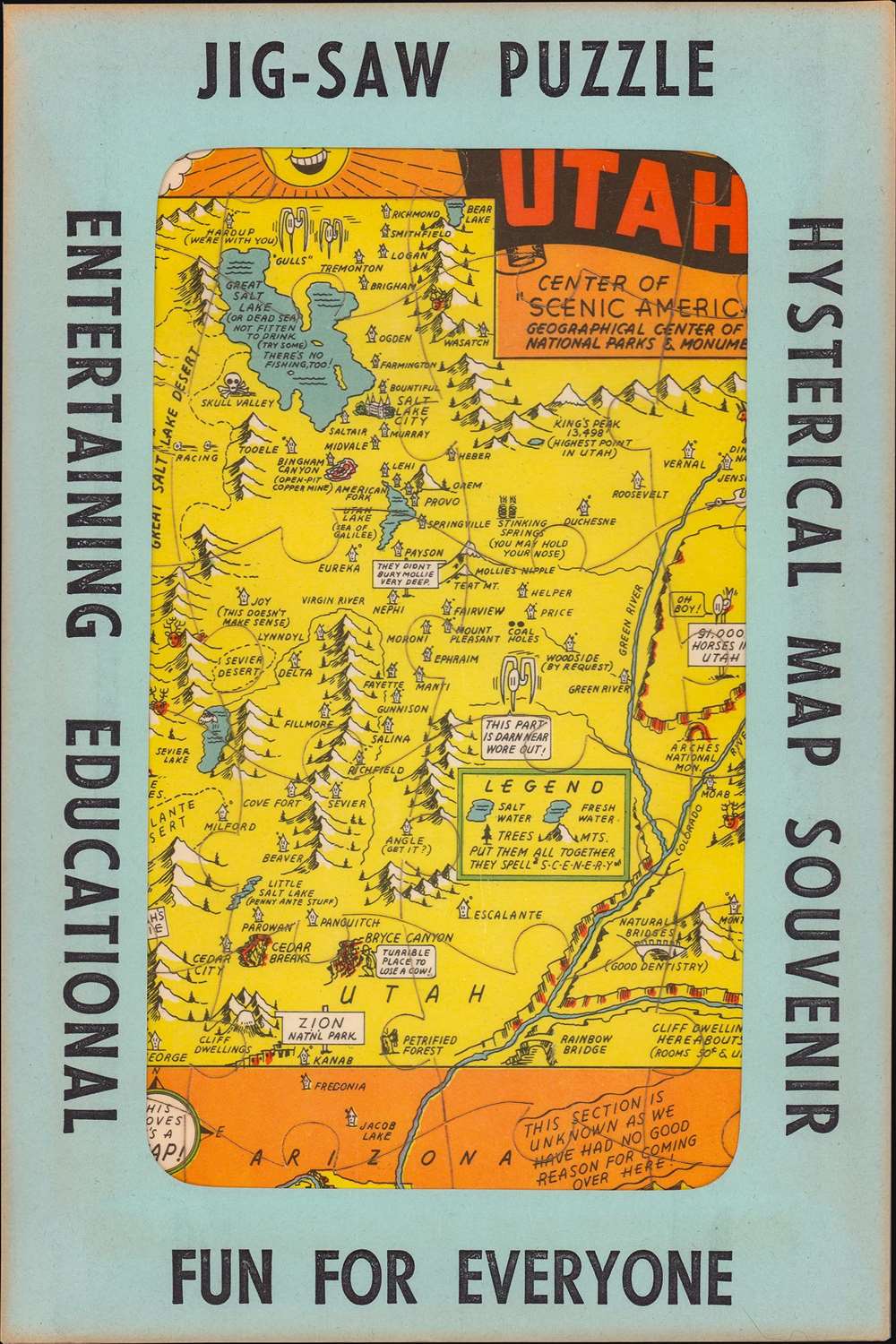 This is a c. 1940 Jolly Lindgren pictorial puzzle map of Utah - an unusual variant the Lindgren 'Hysterical' model. Composed in Lindgren's trademark style, cities and towns are labeled by small shacks, except for Salt Lake City, which is marked by the Mormon Temple. Bryce Canyon, Zion National Park, Dinosaur National Monument, and Arches National Monument are illustrated. Comical asides, part of Lindgren's charm, appear as well, marking Stinking Springs '(you may hold your nose)' and Hardup '(we're with you)'. The compass in the lower left reads, 'This proves it's a map!'

Lindgren Brothers (1928 – 1971) was a Spokane, Washington, based printer known for issuing humorous souvenir auto decals, maps, and posters. The firm was founded by Hjalmer 'Jolly' Lindgren (1895 - September 1952) and his brother Oscar 'Ott' Lindgren (1893 - 1967). Neither brother had middle names when they went off to fight in World War I, but as the government required it, they adopted Jolly and Ott, which stuck with them for life. Jolly was in charge of the art department and Ott was in charge of the business aspects of the firm. The company began as printers and sign makers, and also became innovators in screen printing, and as the Depression deepened, Jolly began producing ‘hysterical maps’. He declared at the time, ‘What this country needs now is something to put a smile on people’s faces.’ The maps are graphically interesting and intended, as the titles suggest, to amuse. The brothers focused on producing maps of popular tourist attractions, and the great national parks of the West were an obvious choice. They produced maps of Yellowstone, the Grand Canyon, Glacier, Zion, Bryce Canyon and others through the early 1940s. Following a hiatus during World War II, the company began producing car decals, some of which were simplified versions of the ‘hysterical maps’. The company sold more than ten million decals in a good year. In 1949, the company was renamed the Lindgren-Turner Company when their traveling salesman, Theodore 'Ted' Turner, Jr. (1902 - 1989), who had been with the firm since 1930, became a partner. Jolly died unexpectedly at 57 while visiting his daughter in Boise, Idaho. The firm continued under his brother, Oscar. William Terao (1915 - 1990), who was hired after World War II by the Lindgrens and eventually became the firm's art director, created two more hysterical maps following Jolly's death. The company's last great success, after the decal market had become too competitive, was a sign that read 'No Trespassing, Survivors will be Prosecuted'. The signs became a massive success, eventually being sold in every Woolworth's department store nationwide - all 2,228 locations. Ott died in 1967 at the age of 74, leaving Turner as the last member of the original team. He, in turn, sold the firm to the Emblem Manufacturing Company based in Los Angeles, in February 1971 and he and his wife moved to New Mexico three years later to be closer to their daughter. Turner wrote a history of the Lindgren-Turner Company during his retirement and died at the age of 87 in 1989. Learn More...