1867 Farrell View of the 'Meeting of the Waters', Vale of Avoca, Ireland 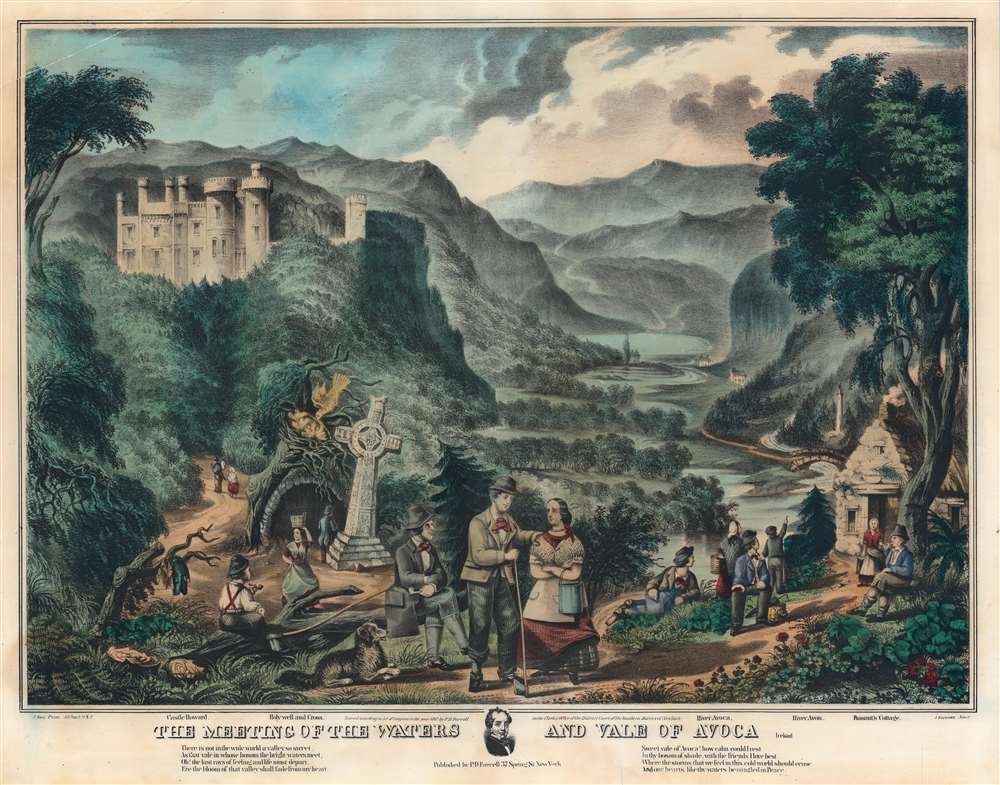 1867 Farrell View of the 'Meeting of the Waters', Vale of Avoca, Ireland

This is a scarce 1867 lithograph view illustrating the idyllic 'Meeting of the Waters' in the 'Vale of Avoca', County Wicklow, Ireland. The tranquil and bucolic scene features picknickers and hikers admiring the beautiful flowing waters while woman gather buckets of the famously delicious water. Castle Howard's iconic towers rise in the background. The Meeting of the Water is formed by the conjunction of the Avonmore and Avonbeg Rivers - the great and little rivers. Today the Vale remains popular with hikers and outdoor enthusiasts.

The Vale of Avoca and in particular the Meeting of the Waters was immortalized in 1808 by the famous poem by Irish romantic poet Thomas Moore (1779 - 1852),

THERE is not in this wide world a valley so sweet
As that vale in whose bosom the bright waters meet;
O, the last ray of feeling and life must depart
Ere the bloom of that valley shall fade from my heart!

Yet it was not that Nature had shed o’er the scene
Her purest of crystal and brightest of green;
’T was not the soft magic of streamlet or hill,-O, no! it was something more exquisite still.

’T was that friends, the beloved of my bosom, were near,
Who made every dear scene of enchantment more dear,
And who felt how the best charms of nature improve,
When we see them reflected from looks that we love.

Sweet Vale of Avoca! how calm could I rest
In thy bosom of shade, with the friends I love best;
Where the storms that we feel in this cold world should cease,
And our hearts, like thy waters, be mingled in peace.

This view was published by P. D. Farrell of 37 Spring Street in 1867. It was printed by Jacob Rau. closely resembles a similar view by Currier and Ives, employing the same viewpoint and iconography, but is otherwise a different composition. The view is scarce, with no market history, but we note a surviving example at the Library of Congress.


Jacob Rau (1821 - ????) was a New York based engraver and lithographer who advertised himself as a 'practical lithographer.' He was born in Holstein, Germany and emigrated to New York between 1848 an 1850, likely fleeting repercussions from involvement in the Revolutions of 1848, making him a 48er. He maintained offices at 333 Broadway and later at 381 Pearl Street, where he published works in association with others from the German-American immigrant community, most prominent among them Gustav Kraetzer (1822 - 1901). Rau published maps, views, advertising, and books. He has some association with the Nicaraguan-German civil engineer Maximilian von Sonnenstern (1819 - 1895), also a 48er from Württemberg, for whom he published several seminal maps. From 1864 he was associated with Edward Valois, also a lithographer, with whom he published under the imprint of 'Valois and Rau.' His production seems to have stopped in the late 1860s. Learn More...

Good. At some point the map was laid down on archival paper. Upper right corner creased with minor damage, but stabilized.