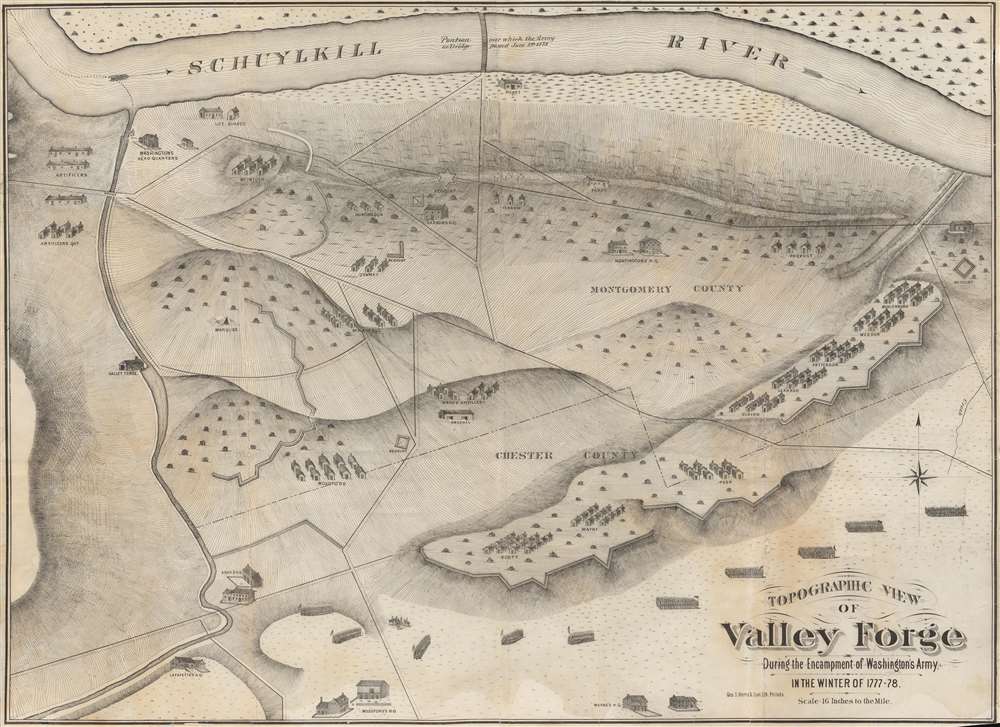 This is a c. 1877 George S. Harris map of Valley Forge, Pennsylvania, and the Continental Army encampment during the American Revolutionary War. Buildings are illustrated in profile, including General George Washington's headquarters, the headquarters of other officers, the arsenal, and huts housing soldiers. Soldiers are illustrating drilling with Baron von Steuben's newly introduced tactics. Redoubts (fortifications) underscore the very real threat of enemy attack.

During the winter of 1777 - 1778, George Washington and the Continental Army wintered at Valley Forge, Pennsylvania. Washington chose Valley Forge due to its proximity to Philadelphia (captured by the British in 1777) and defensible location on a high plateau. From December 19, 1777, through June 19, 1778, soldiers built between 1,600 and 2,000 log huts for the officers and enlisted men.

The winter at Valley Forge became an American legend due to the hardships the soldiers endured. The army entered Valley Forge as a disheartened, near defeated force facing a brutally cold winter with limited supplies. They emerged as a well trained, cohesive fighting force that went on to win the American Revolution and secure independence.

The British had captured Philadelphia in 1777, forcing out the Continental Congress. Congress Representatives encouraged Washington to encamp near Philadelphia in the hopes that a winter campaign could retake Philadelphia. At the time, the Army faced serious supply shortages with many soldiers wearing inadequate uniforms. Nonetheless, hardship and privation were part of everyday life for the Continental Army, so the suffering at Valley Forge, while unfortunate, was consistent with conditions elsewhere.

This map was published by George S. Harris and Son c. 1877. We note a single example in OCLC, at Cornell University. A example is located at the Huntington Library. This map is scarce on the private market, as we have been able to trace only one other instance when it has come to market.