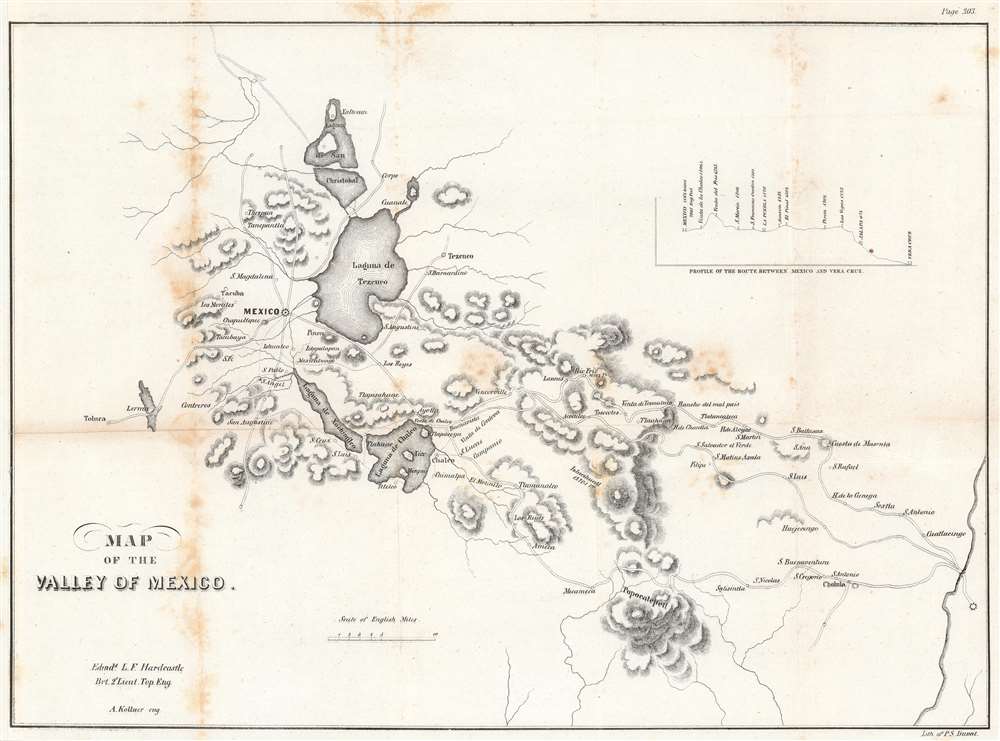 Provides geographical context for the recently concluded Mexican-American War after the American capture of Mexico City.
$350.00

Created just after the Mexican American War, this is an 1847 Edmund Hardcastle map of the Valley of Mexico, a highlands plateau in central Mexico containing present-day Mexico City and the eastern half of the State of Mexico. The map depicts the region from Toluca to Cuatlacingo and from Xaltocan to Popocatepetl. Meant to illustrate a portion of the theater of war, Mexico City is situated on the left side near Lake Texcoco (Laguna de Tezcuco), and settlements, roads, lakes, and mountains throughout the region are illustrated. The American army, und General Winfield Scott, landed a Veracruz on the Mexican coast of the Gulf of Mexico and marched west, and eventually assaulted and captured Mexico City. A profile of their march is situated in the upper right quadrant.

This map was drawn by Edmund Hardcastle, engraved by Augustus Kollner, and lithographed by Peter Duval. It was published as part of a government report for Congress after the Mexican-American War. This map is well represented in institutional collections but scarce on the private market.


Augustus Kollner (1812 - December 10, 1906) was an artist, engraver, and lithographer based in Philadelphia. Born in Wurttemberg, Germany, Kollner began his career in Germany, working as a book illustrator in Stuttgart and Paris in the late 1820s and 1830s before immigrating to the United States in 1839. After settling in Washington, D.C., Kollner worked as a lithographer for the Haas firm, working on advertisements, bank notes, and city views. He moved to Philadelphia in 1840 and tried unsuccessfully to establish himself as a portrait painter. After this misstep, Kollner became the second chief artist of P.S. Duval and William Huddy's 'U.S. Military Magazine' (1839 - 1842). Throughout the 1840s, Kollner worked as a lithographer for many different Philadelphia based lithographic firms, including Duval, J.T. Bowen, Frederick Kuhl, Thomas Sinclair, and Wagner and McGuigan. Between 1847 and 1848, Kollner began working for the lithographic firm Brechemin and Camp, for whom he designed all genres of lithographs and advertised his own lithographic views based on his annual summer sketching trips along the East Coast. His work also began to be published in the seminal series 'View of American Cities', published between 1848 and 1851 by Goupil, Vibert, and Company. While working for Brechemin and Camp, Kollner was responsible for creating the multi-foot Dripp's map of New York City. Kollner established his own firm in 1851 and worked on a wide range of projects, including advertisements, labels, city and landscape views, and maps. During the Civil War, Kollner enlisted in the cavalry in 1863 and later sold photographic reproductions of the etchings he did as a soldier. He produced his last series of landscape lithographs entitled 'Bits of Nature' in 1878, but focused mostly on his watercolor work during the late 1870s. Kollner retired in the early 1880s, but continued to make sketching trips around the Philadelphia area. Kollner married Mary Sheek (c. 1821 - 1899) in 1843, and they had several children, three of which survived infancy: William, Clara, and Josephine. Kollner died on December 10, 1906.

Good. Backed on archival tissue for stability. Some soiling. Blank on verso.