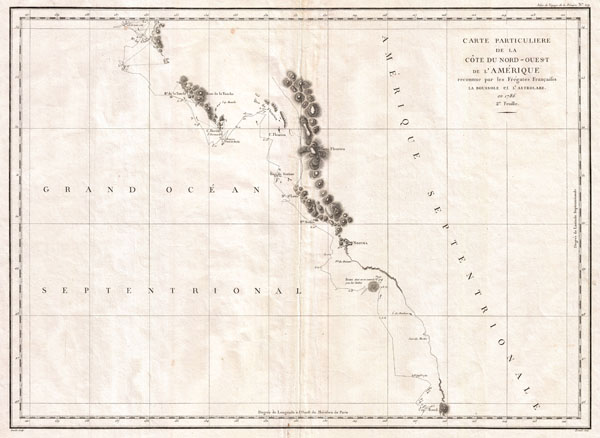 One of the first map of Vancouver's western shore and British Columbia.

This is a fine example of La Perouse's important 1787 mapping of Vancouver Island and the coastlines of Washington and British Columbia. When drawn in 1787 La Perouse's map was the only available map of this region not based on the survey work of Captain Cook. The map covers the coastline from Cape Rond (Tillamook Head, Oregon) northwards past Vancouver Island as far the northwestern top of the Baie de Clonard (The Queen Charlotte Islands or Haida Gwaii). The cartography here may be a little hard to understand for most casual observers due Perouse's use of archaic French language place names and well as a number of major errors. Perouse, like Cook, entirely missed the entrance to the Strait of Juan de Fuca, consequently Vancouver Island is erroneously attached to the mainland. Nonetheless, many of the sites visited by early explorers, including the Nootka Sound, the Bay of St. Louis (Quatsino Sound), Pointe Boisee (Cape Cook), Mont Fleurieu (Silverthrone Mountain), Cape Fleurieu (Goose Island), Cap Hector (Cape St. James), and many others are noted. Cartographically Perouse's mapping of this region, though still quite incomplete, is a major advancement over the work of Cook who after leaving Nootka Sound was forced offshore by stormed and skipped much of the coast until he reached Alaska near Sitka. This is thus the first chart to map the British Columbia coastline between 49°34' and 57°. In its day the importance of this chart went largely unknown for, though the survey work and original engraving date to 1786, the atlas of La Perouse's discoveries was not officially published until 1798, by which time other more advances mappings of the region had reached the mainstream. Nonetheless, this map is a vital addition to any serious collection focusing on the cartographic development of America's northwest coast.