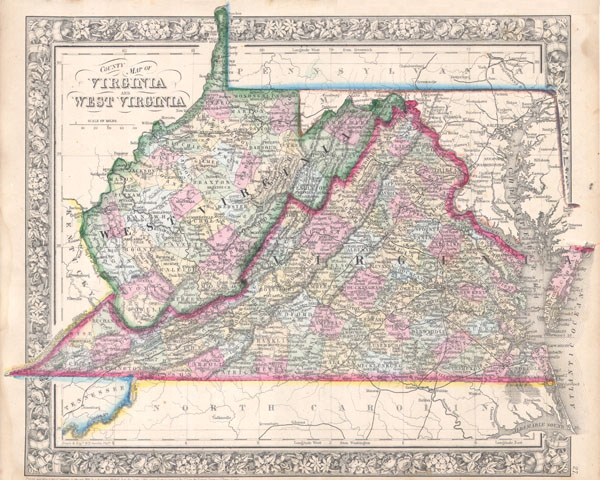 A beautiful example of S. A. Mitchell Jr.'s 1864 map of Virginia, West Virginia and Maryland. This map was revised version of Mitchells 1860 map of the same region to accommodate for the separation of Virginia and West Virginia in 1862. Includes the full Chesapeake Bay from Cape Henry to the mouth of the Susquehanna River. Curiously Harper's Ferry is mapped into Virginia rather than West Virginia. Shortly after the end of the Civil War, Harpers Ferry, along with all of both Berkeley and Jefferson Counties, was separated from Virginia and incorporated into West Virginia. . The inhabitants of the counties as well as the Virginia legislature protested and is this that protest we see reflected here in Mitchell's political map making. In the end the cartography was not to have his way and Harper's Ferry was moved to West Virginia in subsequent maps, thus creating the West Virginia panhandle. One of the most attractive and interesting atlas maps of this region to appear in the mid 19th century. Features the floral border typical of Mitchell maps from the 1860-65 period. Prepared by W. H. Gamble for inclusion as plate 27 in the 1864 issue of Mitchell's New General Atlas. Dated and copyrighted, 'Entered according to Act of Congress in the Year 1863 by S. Augustus Mitchell Jr. in the Clerk's Office of the District Court of the U.S. for the Eastern District of Pennsylvania.'