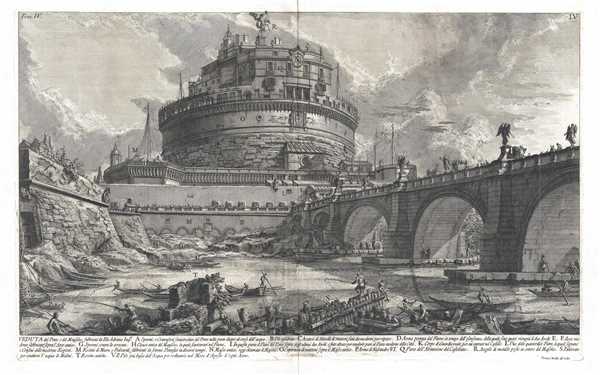 The converted mausoleum of Emperor Hadrian, this building became the Papal Fortress and is now a museum.

This is a 1756 Giovanni Battista Piranesi view of the Castel Sant'Angelo, formerly Emperor Hadrian's Mausoleum, in Rome, Italy. The view depicts the Castel Sant'Angelo from across the Tiber River along with the St. Angelo Bridge, also known as the Pons Aelius or the Aelian Bridge, which was also commissioned by Hadrian. Twenty different architectural elements are alphabetically labeled throughout the view, spread out between the bridge and the Castel Sant'Angelo.

The Castel Sant'Angelo which stands in Rome today is not the same building which was constructed by the ancient Romans. The ashes of the emperors were lost during the sacking of Rome by the Visigoths in 410. The original decorative stone and bronze statuary were used against the attacking Goths when they laid siege to Rome in 537. Legend has it that, in the act of sheathing his sword, the Archangel Michael appeared atop the mausoleum as a sign of the end of the plague in 590, which is how the castle gained its current name. Other legends involving the Archangel and the castle also exist. Michael is the statue which appears at the top of the building in this view.

The popes, however, were the ones that converted the mausoleum in to a castle. Pope Nicholas III connected the castle to St. Peter's Basilica by a fortified corridor, and Pope Clement VII sought refuge there during Charles V's Sack of Rome in 1527. The Papal State also used Sant'Angelo as a prison and executions were performed in the small inner courtyard.

This view was produced by Giovanni Battista Piranesi in 1756 as part of his series Vedute di Roma published in Antichità Roma in volume four as plate number four.
As is the case of all editions of Piranesi's work until the 19th century restrikes, this engraving is printed on thick laid paper; this one possesses a double-oval fleur-de-lis watermark. The Firmin-Didot restrike (Paris, 1835-39) was printed on wove paper.

Giovanni Battista Piranesi (October 4, 1720 - November 9, 1778) was an Italian artist famous for his etchings of Rome and fictitious ‘prisons’. He was born in Mogliano Veneto, which was part of the Republic of Venice. He learned his trade (Piranesi considered himself an architect) from his father, a stonemason and master builder, his uncle, who taught him structural and hydraulic engineering, an his brother, a Carthusian monk, who inspired Piranesi’s fascination with history and the ancient Romans.

Piranesi is also celebrated for his series known as The Prisons (Carceri d’invenzione, ‘Imaginary Prisons’). These are fantastic, labyrinthine structures of epic proportions. He began working on the series in 1745, and the first state prints, which included fourteen etchings, were published in 1750 and were untitled and unnumbered. The second publishing in 1761 was formatted differently. This series included sixteen etchings, all of this were reworked and numbered I-XVI (1-16). Numbers II and V were new to the series. Though the series remained untitled, each of the sixteen etchings now is attached to a ‘conventional’ title. Learn More...