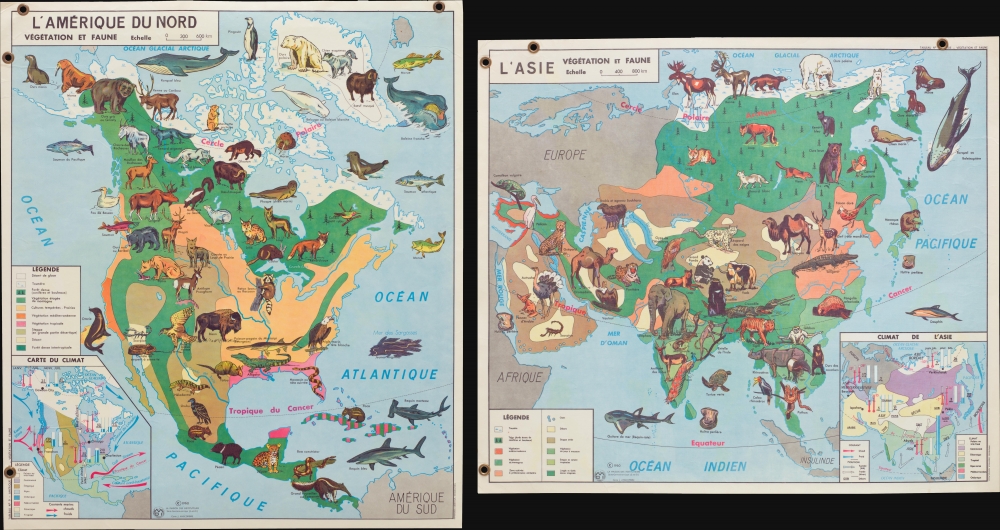 A double-sided French pictorial map illustrating the plants and animals of North America and Asia.
$300.00

This is a 1960 Jean Anscombre double-sided pictorial map of the plants and animals of North America and Asia. The map depicts North America from the Pacific Ocean to the Atlantic Ocean and from the Arctic Ocean to northern South America and Asia from Europe and East Africa to the Pacific Ocean and from the Arctic Ocean to the Indian Ocean and Indonesia. Strikingly colored and wonderfully illustrated, both maps feature 'portraits' of the animals native to these continents, each identified by the French name. Some of the species illustrated in North America include the moose, beaver, raccoon, mountain goat, pronghorn antelope, bison, bald eagle, jaguar, and giant anteater. In Asia, the wolverine, polar bear, Mandarin duck, golden pheasant, Indian rhinoceros, sun bear, pangolin, yak, snow leopard, and giant panda make an appearance. The vegetation present on both continents is illustrated through the use of colors that correspond to legends situated on the right of both maps. Each color represents a different zone of vegetation. Inset maps, situated, respectively, in the lower right corner of the map of Asia and the lower left corner of the map of North America the climate throughout both continents, complete with average amounts of precipitation, average temperatures, wind directions, and ocean currents.

This map was created and published by Jean Anscombre and La Maison des Instituteurs in 1960 and printed by the Imprimeries Oberthur.

Jean Anscombre (fl. c. mid 20th century) was the director of the 'La Maison des Instituteurs' publishing firm that specialized in educational posters, books, and maps and was based in Saint-Gemain-en-Laye, France.

Very good. Laminated. Map of North America on one side map of Asia on the other. Four gommets present on map originally used for display purposes in classroom.
Looking for a high-resolution scan of this?